A place in the UEFA Euro 2020 semi-finals will be up for grabs when Switzerland and Spain meet in St Petersburg in the first quarter-final tie on Friday.

The UEFA Euro 2020 Round of 16 is done and dusted, with the next knockout stage upon us. The quarter-finals of the competition will kick off in St Petersburg on Friday evening, when Switzerland will take on one of the favourites to win the current edition, Spain.

Switzerland produced THE shock result of UEFA Euro 2020 so far, as they came from two goals down to beat France on penalties after their Round of 16 tie had ended in a 3-3 draw. Having only made it to the first knockout round with a win over Turkey on Matchday 3 of the group stage, the result against Les Bleus definitely came as a huge surprise.

Spain, on the other hand, also saw their game go right down to the deep end, as they needed extra time to get the better of Croatia, with the pulsating encounter ending in a 5-3 win for them. The last two performances have been quite promising on the offensive front, although defensively, they did leave a lot to be desired during Croatia’s late onslaught. Otherwise, Spain have been quite solid at the back.

Switzerland and Spain played out a 1-1 draw the last time they faced off against each other, in a UEFA Nations League clash last year, with Remo Freuler and Gerard Moreno on target. Ahead of the latest meeting between the two sides, The Hard Tackle takes a closer look at the encounter.

Granit Xhaka has been awarded the Star of the Match for his tremendous performance against France tonight.

He will miss the quarter-final game against Spain due to suspension, so unlucky, he will be missed. ❤️🇨🇭 pic.twitter.com/HARrD0Qnlw

Vladimir Petkovic has been handed a major blow on the team news front ahead of the UEFA Euro 2020 quarter-finals against Spain. On Friday, the Switzerland head coach will have to make do without captain Granit Xhaka, who is suspended due to an accumulation of yellow cards.

The absence of Xhaka could well hurt Switzerland a fair bit, considering he was the catalyst in their comeback win over France. The Switzerland skipper’s void ought to be filled by Denis Zakaria, who will pair up with Remo Freuler in the middle of the park, while Steven Zuber and Silvan Widmer will likely be the two wing-backs for Switzerland.

Zuber’s presence in the left wing-back slot would mean Ricardo Rodriguez is likely to be deployed in the three-man central defensive unit in place of Fabian Schar. Rodriguez will have Nico Elvedi and Manuel Akanji as his partners at the back, while Yann Sommer will take his place in goal.

Finally, in attack, Xherdan Shaqiri will be the creator-in-chief for Switzerland, playing off of the two strikers, who ought to be Breel Embolo and Haris Seferovic. Both Embolo and Seferovic have been in fine touch at UEFA Euro 2020 and will pose a great deal of threat on the counter. 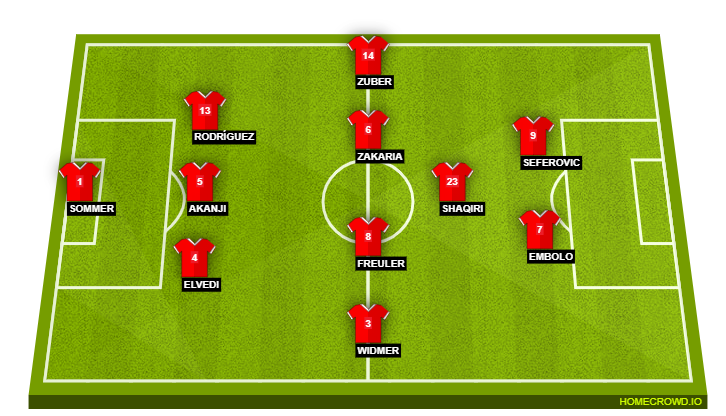 Unlike his counterpart in the Switzerland dugout, Luis Enrique does not have any fresh roster issues hampering his preparations ahead of the quarter-final tie. On Friday, the Spain boss will have a full-strength squad at his disposal, although there are a few players walking the suspension tightrope.

David de Gea could be deployed between the sticks by Enrique following the catastrophic error by Unai Simon against Croatia. In front of de Gea, Spain will line up in their usual 4-3-3 formation, with Eric Garcia retaining his spot at the heart of the defence ahead of Pau Torres.

Garcia will have Aymeric Laporte as his central defensive partner, with Cesar Azpilicueta and Jordi Alba being the two full-backs. Alba ought to replace Jose Gaya after getting a bit of a breather last time out versus Croatia.

Up ahead in midfield, there is no looking past Sergio Busquets, Koke and Pedri. Busquets will sit at the base of the three-man unit, getting defensive support from Koke. Meanwhile, Pedri will provide the creative impetus from the middle of the park.

Finally, the attacking trifecta picks itself as well following the exploits versus Croatia. Ferran Torres and Pablo Sarabia were in their elements in the Round of 16 tie while Alvaro Morata played his part in the win and will lead the line for Spain against Switzerland. 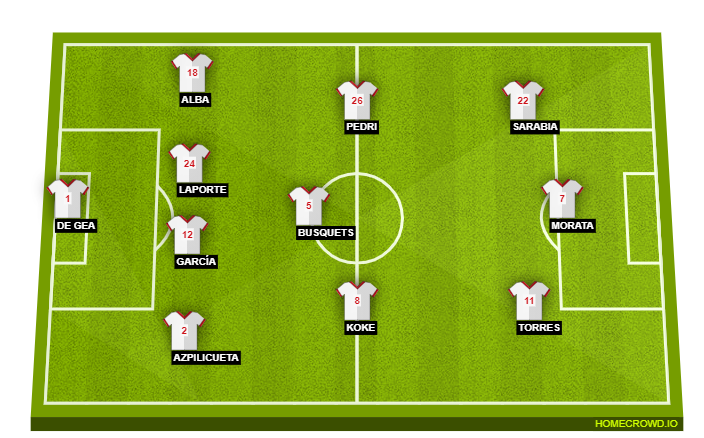 There are no two ways about it. Granit Xhaka is likely to be sorely missed by Switzerland when they take on Spain this week. After being pivotal in their comeback win over France, it is clear just how valuable the Switzerland captain is for his side. In his absence, the onus of keeping a lid on Spain will be on Denis Zakaria.

The 24-year-old has recently lost his place as a regular for Switzerland following his battle with a long-term injury. Now set to be given a rare chance at UEFA Euro 2020, Zakaria will need to keep a check on Pedri, which will, in turn, deprive Spain of a major source of creativity. Will he deliver the goods?

Speaking of, Pedri has taken no time to establish himself as a key player for Spain, adding another dimension to their gameplay. This was once again prevalent in the Round of 16 clash with Croatia last time out.

Pedri will once again hold the key for La Roja, providing the line breaking passes that can bring Ferran Torres and Pablo Sarabia into the game on a more constant basis. If not, the responsibility of creating the chances will start falling solely on the full-backs, which falls right in the ballpark for Switzerland.

Spain seem to have a distinct advantage ahead of the UEFA Euro 2020 quarter-final tie against Switzerland, who will dearly miss Granit Xhaka. However, if there is one thing that Switzerland have shown in the game, it is that they do not know the meaning of the word ‘quit’.

Having said that, Luis Enrique seems to have identified the perfect formula to unearth the creative qualities in his side. With Ferran Torres, Pedri, Pablo Sarabia and the two full-backs all being in fine touch, Spain seem to have enough quality to get over the line, even if narrowly so. The Hard Tackle predicts a 2-1 win for Spain.