A spot in the UEFA Euro 2020 quarter-finals will be on the line when England face Germany at Wembley in their Round of 16 tie on Tuesday.

The serious business is about to begin at UEFA Euro 2020, with the Round of 16 stage nearly done and dusted. However, before we have our eight quarter-finalists, just two more games remain on Tuesday to bring the curtains down on the first knockout round. The first match on the day will be played at Wembley, where England will take on Germany.

England reached the UEFA Euro 2020 Round of 16 on the back of finishing as Group D toppers, having been one of just seven teams to end the group stage unbeaten. Better yet, the Three Lions are the only team yet to concede a goal at the tournament. However, Gareth Southgate & co. have appeared to be very laboured in the attacking phases, managing just two goals across three games so far.

Germany, on the other hand, were drawn in the group of death and it is hardly surprising that they endured a roller-coaster of a ride into the Last 16 stage. Die Mannschaft, though, battled hard after losing their first game to France, beating Portugal in quite a handy fashion before a 2-2 draw with Hungary meant they finished runners-up in Group F to set up a Round of 16 date with England.

England and Germany have one of the more storied rivalries in international football in Europe, but their most recent match-up ended in a goalless draw back in 2017 in a friendly. Ahead of the latest meeting between the two sides, The Hard Tackle takes a closer look at the encounter.

Gareth Southgate does not have any fresh injury concerns hampering his preparations ahead of the UEFA Euro Round of 16 clash with Germany. On Tuesday, the England manager will have a fully fit squad to choose from, with Mason Mount and Ben Chilwell back at his disposal after missing the final group game.

Mount will walk straight back into the starting lineup, replacing Jack Grealish in the attacking setup to reprise the no. 10 role. The young midfielder will play off of captain Harry Kane, who will lead the line for England against Germany, desperately hoping to turn his fortunes around after a dreadful group stage.

Mason Mount is set to return for England. (Photo by Richard Heathcote/Getty Images)

Raheem Sterling is indispensable for England under Gareth Southgate and after scoring each of the Three Lions’ two goals so far, the 26-year-old is an automatic pick on the left flank. On the right wing, Bukayo Saka will hope to keep hold of his spot after an impressive showing last time out versus Czech Republic, with Phil Foden missing out again.

As for the midfield double pivot, Declan Rice and Kalvin Phillips are irreplaceable despite the availability of Jordan Henderson. Phillips will be the workhorse in the middle of the park, often charging forward to press in advanced positions. As for Rice, he will sit deep and look to pull the strings for England.

Finally, the defensive unit is unlikely to be tinkered with following a solid return to action for Harry Maguire, meaning Tyrone Mings will be unfortunate to miss out for a second successive game. John Stones will pair up with Maguire at the heart of England’s defence, with Luke Shaw and Kyle Walker being the two full-backs. Finally, there is no looking past Jordan Pickford in goal. 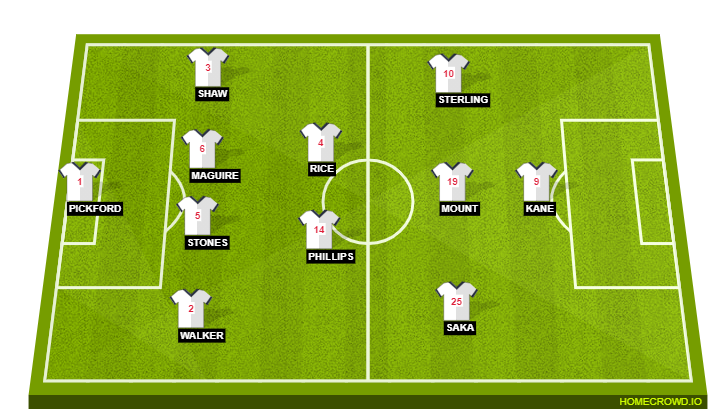 Like his counterpart in the England dugout, Joachim Low has a full-strength squad at his disposal heading into the UEFA Euro 2020 Round of 16 tie. The Germany head coach, though, will be sweating over the suspension tightrope situation, with Matthias Ginter, Ilkay Gundogan, Joshua Kimmich, Kai Havertz, and Leroy Sane all in a position to miss the next game if booked.

While Sane is not a starter for Germany, the rest of the players are key figures for Low and will need to be at their best behaviour to come through unscathed from the game against England. Manuel Neuer will take his customary spot between the sticks, with Germany lining up in a 3-4-3 formation in front of the captain.

Ginter will line up in the three-man central defensive unit, with Mats Hummels and Antonio Rudiger being his partners at the back. Up ahead in midfield, Toni Kroos will be tasked with keeping Germany in control of the proceedings, with the 31-year-old receiving support from Ilkay Gundogan.

Gundogan, though, will have more of a defensive outlook in the game, providing a solid base for Kroos to flourish. Out wide, Joashua Kimmich and Robin Gosens are certainties, with the duo combining to form the most fearsome wing-back partnership at UEFA Euro 2020, courtesy of their tremendous output from deliveries.

Finally, in attack, Thomas Muller, Kai Havertz and Serge Gnabry will all keep hold of their spots in the side. Muller will reprise the false nine role, with his movement bringing Havertz and Gnabry into the game. The young forwards will hope to veer infield regularly, but have to improve their end product against a disciplined England defence. 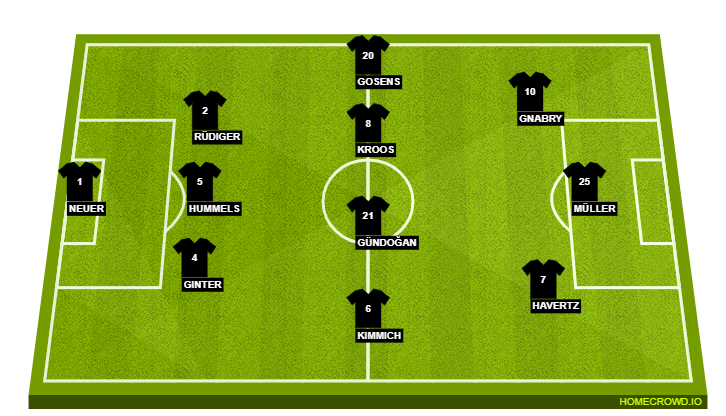 Will Raheem Sterling rise to the occasions yet again for England? (Photo by Michael Regan/Getty Images)

Harry Kane will invariably have the spotlight on him after being nothing short of underwhelming in the group stage. However, it is Raheem Sterling who gets the nod for this section after scoring each of England’s goals so far at UEFA Euro 2020.

The 26-year-old might not have enjoyed the best of campaigns this past season with Manchester City, but he transforms into a completely different player for England. And against Germany on Tuesday, Sterling will need to be at his very best in order to once again take the burden off of Kane, which might possibly help the England captain to play freely at long last. Another big game beckons for Sterling.

From a forward who has shown signs of promise at UEFA Euro 2020 to a defender who has gone the opposite way in the tournament. Rudiger arrived at the European Championship after turning his fortunes around at Chelsea in the second half of 2020/21, but has been well off his best so far at UEFA Euro 2020.

With Bukayo Saka proving to be a menace for Czech Republic last time out, Rudiger will know that he will need to be at his very best in order to help his side keep England at bay. If not, the Three Lions could well come out on top, provided they can once again remain solid at the back.

Rudiger has a point to prove. (Photo by Patrik Stollarz/AFP/Getty Images)

This is one of those games wherein England often fail to step up. Over a decade after bowing out at the hands of Germany in a Round of 16 tie, albeit at the 2010 FIFA World Cup, the Three Lions have a chance to correct the record, show that they have the bottle to prevail in a crunch fixture and end their winless run against Germany at Wembley all at the same time.

The key to their performance will be the performance of the defensive unit and it is here where England will impress again. On the opposite end, the Three Lions could struggle to break Germany down, but Harry Kane could finally join the party on Tuesday. With that in mind, The Hard Tackle predicts a closely-contested affair, with England prevailing by the most slender of margins.