A place in the UEFA Euro 2020 quarter-finals will be up for grabs when Croatia face Spain at the Parken Stadium in the Round of 16 on Monday.

We are right at the midway point of the Last 16 stage of UEFA Euro 2020, with just four more spots remaining to be sealed until each of the quarter-final fixtures are set in stone. On Monday, the first game on show will be played at the Parken Stadium in Copenhagen, where Croatia will take on Spain.

Croatia had to take the scenic route to make it to the UEFA Euro 2020 Round of 16, having raked in just one point after their first two games. However, a 3-1 win over Scotland coupled with England’s 1-0 success against Czech Republic meant the Vatreni clinched second spot in Group D behind the Three Lions.

Spain, like Croatia, were up against it after their opening two fixtures in the group stage. With each of those games ending in a stalemate, La Roja needed all three points to guarantee their place in the Round of 16. And Luis Enrique’s charges did exactly that, with a 5-0 rout of Slovakia confirming their spot at Group E runners-up.

Croatia were 3-2 victors the last time they locked horns with Spain, in a pulsating UEFA Nations League clash in 2018. Ahead of the latest meeting between the two sides, The Hard Tackle takes a closer look at the encounter.

Zlatko Dalic has a couple of fresh roster issues hampering his preparations ahead of the UEFA Euro 2020 Round of 16 tie against Spain. On Monday, the Croatia head coach will have to make do without as many as two regulars.

Ivan Perisic could well have played his final game of the tournament, depending on the result on Monday versus Spain after testing positive for COVID-19. The other missing player for Croatia is Dejan Lovren, who is unavailable due to a suspension. In addition, Sime Vrsaljko is a minor doubt due to a lack of match fitness.

Ivan Perisic has tested positive for COVID-19 and must self-isolate for 10 days, the Croatian Football Federation announced.

He will not be available for Croatia's round-of-16 matchup against Spain on Monday. pic.twitter.com/inThYvM8Ey

In Lovren’s absence, Duje Caleta-Car is certain to pair up with Domagoj Vida at the heart of Croatia’s defence, with Josko Gvardiol the obvious pick on the left flank. As for the right-back slot, Josip Juranovic could be handed a start while in goal, there is no looking past Dominik Livakovic.

Meanwhile, the absence of Perisic could prompt a change in system, with Croatia shifting to a 4-3-1-2 complete with a midfield diamond. The onus will, therefore, be on the midfield quartet to crowd out Spain in the middle of the park by creating overloads, with Luka Modric and Nikola Vlasic providing the forward thrust from higher up the pitch.

Marcelo Brozovic will sit at the base of the midfield unit, looking to keep a lid on Pedri’s output while Mateo Kovacic will be the workhorse in the middle of the park. Finally, Ante Rebic and Bruno Petkovic will form the strike partnership for Croatia against Spain. 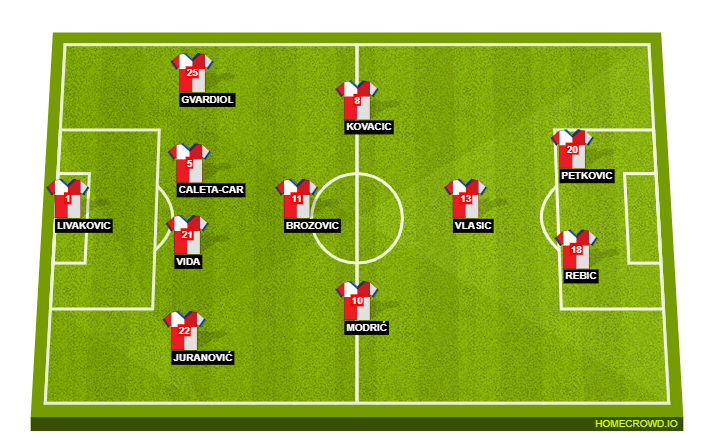 Unlike his counterpart in the Croatia dugout, Luis Enrique has a fully fit squad at his disposal ahead of the UEFA Euro 2020 Round of 16 match-up. That, in itself, tips the scales in favour of Spain in the build-up to the game.

The return of Sergio Busquets proved to be a real game-changer for Spain, who ought to retain control of the game even though they will be a man short in the middle of the park. Busquets ought to set the tempo of the game, with defensive support coming from Pedri and Koke.

Pedri will also provide the creative impetus from the middle of the park, bringing the front-men into the game. Speaking of, Pablo Sarabia will hope to continue from where he left off last time out, taking up the right wing berth, while Gerard Moreno is a certainty on the left flank. Alvaro Morata will lead the line for Spain against Croatia.

As for the defence, Enrique is unlikely to tinker with a solid unit, with Cesar Azpilicueta keeping his place ahead of Marcos Llorente as the right-back, while Jordi Alba is a certainty on the left-hand side. At the heart of Spain’s defence, Eric Garcia and Aymeric Laporte are automatic picks while Unai Simon picks himself in goal. 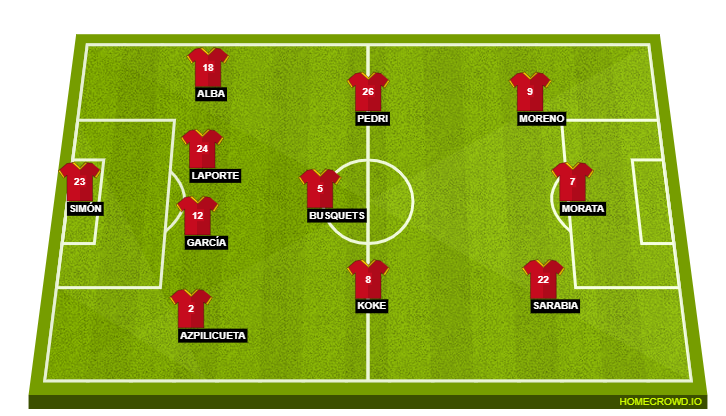 Who else but the captain fantastic? Luka Modric seems to be playing every game as if it’s his last for Croatia and that has been telling as he has been by far their best player so far at UEFA Euro 2020. So, if Croatia are to spring a surprise on Spain, Modric’s output will hold the key.

The veteran midfielder has been absolutely tireless so far and he will once again need to be at his very best to bypass his counterparts and get any closer to troubling the Spanish defence. Will we see a Luka Modric special once again on Monday?

If Modric has been in a league of his own as far as Croatia are concerned, Sergio Busquets has also showed that he is ageing like fine wine. Back in the starting lineup against Slovakia, the Spain captain was the catalyst in a commanding performance.

The veteran midfielder will have to be at his colossal best to stop Modric in his tracks and a classic battle at club level now looks set to be recreated in Copenhagen. And how Busquets fares in the Round of 16 tie on Monday will go a long way in determining the final outcome of the game.

The absence of Ivan Perisic has been a big blow for Croatia, there are absolutely no two ways about it. Not only has Zlatko Dalic lost a key player, but he could also be forced to alter his system, which will surely throw a spanner in the works for the Vatreni, especially in the wake of Spain’s top-notch showing last time out.

Spain, on the other hand, have momentum in their favour as well and all signs point towards a largely straightforward outing for La Roja. Croatia ought to put Luis Enrique & co. under some pressure, but that is unlikely to be sustained, with Spain running out comfortable 3-1 winners in the end to clinch a place in the quarter-finals.