A place in the UEFA Euro 2020 quarter-finals will be up for grabs when Wales and Denmark meet in the Round of 16 at the Johan Cruijff ArenA on Saturday.

The first phase of UEFA Euro 2020 is done and dusted, and we have our 16 qualifiers for the knockout stages, with the first round set to begin on Saturday. The action in the Round of 16 kicks off in Amsterdam on Saturday when Wales will take on Denmark at the Johan Cruijff ArenA.

Wales have been one of the more impressive teams on show at UEFA Euro 2020, reaching the Round of 16 after the first two matchdays. And so, the 1-0 defeat to Italy in their final Group A tie did not matter one bit, especially with Switzerland falling behind them on goal difference, which meant the Dragons finished runners-up behind the Azzurri.

Denmark, on the other hand, had to wait till the very last matchday to get their first points on the board. After losing their opening two games to Finland and Belgium, in addition to the trauma of Christian Eriksen’s situation, the Red and White had it all to do in their final clash while still needing the stars to align perfectly.

That is exactly what happened as they beat Russia 4-1 while Finland were beaten by Belgium to help Denmark clinch the second spot in Group B and set up the date with Wales. Denmark were 2-1 victors the last time they locked horns with Wales, in the inaugural edition of the UEFA Nations League. Ahead of the latest meeting between the two sides, The Hard Tackle takes a closer look at the encounter.

Rob Page has one fresh roster issue hampering his preparations ahead of his side’s Round of 16 tie against Denmark. On Saturday, the Wales caretaker boss will be without Ethan Ampadu, who was sent off against Italy in contentious fashion.

The absence of Ampadu is likely to force Page to shuffle his system around and revert to the 4-2-3-1 formation he used in the first two games. The change will also be on the personnel level, with Chris Mepham and Ben Davies likely to be recalled in the backline.

Ethan Ampadu will not take the field against Denmark due to a suspension. (Photo by Attila Kisbenedek/AFP/Getty Images)

Mepham will pair up with Joe Rodon at the heart of Wales’ backline, with Davies returning as the left-back. On the right flank, Connor Roberts is a certainty, with Danny Ward taking his customary place in goal against Denmark.

Up ahead in midfield, Joe Morrell and Joe Allen pretty much pick themselves in the double pivot, with their primary objective being to keep a lid on Mikkel Damsgaard’s output. Morrell, though, will also have a lot riding on him during transitions and then bring Aaron Ramsey into play.

Speaking of Ramsey, he will return to reprising the no. 10 role after playing as a False Nine last time out against Italy. Ramsey’s shift in position would entail the return of a striker, with Kieffer Moore likely to lead the line for Wales against Denmark. The key man will once again be Gareth Bale, while Daniel James will provide the creative impetus from the left flank. 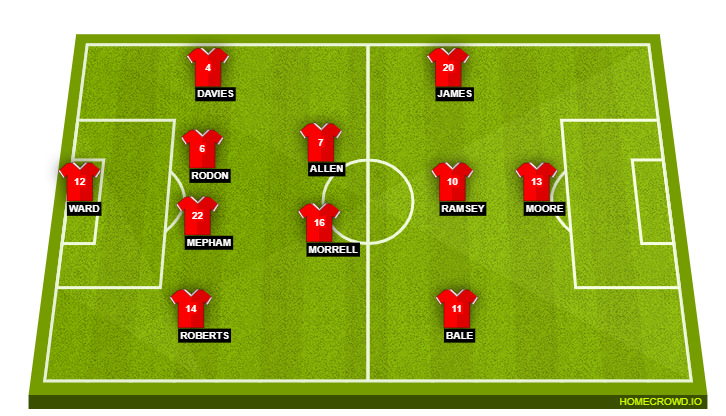 Unlike his counterpart in the Wales dugout, Kasper Hjulmand does not have any new concerns to deal with ahead of his side’s latest fixture. On Saturday, the Denmark head coach will have each of his players at his disposal minus Christian Eriksen, who is continuing his recovery.

A shift in formation from 4-2-3-1 to 3-4-3 has worked positively for Denmark, especially in the wake of Eriksen’s absence. With the approach being more direct, the two wing-backs have more creative responsibility, while the three forwards remain more compact and try to create overloads in the final third.

Mikkel Damsgaard will be the False Nine yet again, having the license to roam across the frontline, with his movement bringing Yussuf Poulsen and Martin Braithwaite into the game. Damsgaard will also offer some creative impetus from the central areas, making him a key player for Denmark, as he was against Russia.

As for midfield, the onus will be on Pierre-Emile Hojbjerg and Thomas Delaney to keep a lid on the output of Aaron Ramsey while also restricting Gareth Bale’s movement infield. Daniel Wass and Joakim Maehle will be the two wing-backs who will have a lot riding on them with their deliveries.

At the back, the presence of Andreas Christensen, Jannik Vestergaard and Simon Kjaer will be critical, as the three central defenders will look to remain compact and snuff out clear spaces. Finally, Kasper Schmeichel is the automatic pick in goal and could well be a busy man between the sticks. 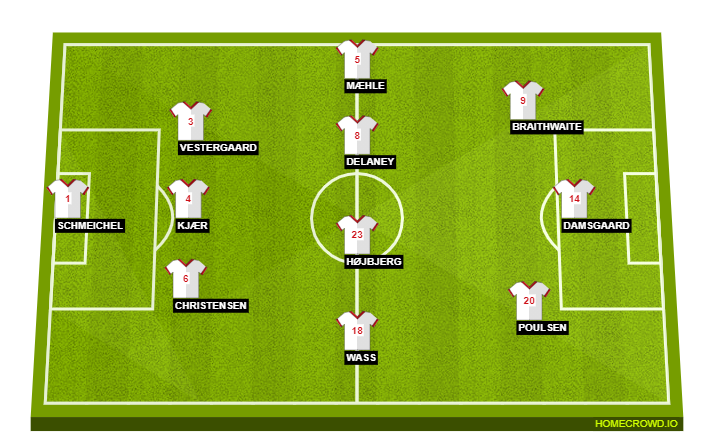 Will Bale make a mark against Denmark? (Photo by Paul Ellis/AFP via Getty Images)

Who else but the captain and talisman, who has been in decent touch so far in the tournament. The Wales skipper started his campaign at UEFA Euro 2020 in a sub-par fashion and hardly made an impact against Switzerland. However, Bale was the difference-maker versus Turkey and has shown some good touches so far.

So, if Wales are to stand a chance of making it to the quarter-finals in the competition for a second successive edition, Bale has to be on the money and, in turn, bring players like Aaron Ramsey and Daniel James into the game, while his own direct running can cause issues to the Danish backline.

While defence will likely be under quite a bit of pressure from Gareth Bale & co. and will need to be at their very best, it is the output in the final third that will be under the spotlight when it comes to Denmark. To that end, one player whose output will be under scrutiny is Mikkel Damsgaard.

The 20-year-old was one of the more impressive young players in Serie A this past season, which has earned him interest from Barcelona. He has performed quite admirably for Denmark at UEFA Euro 2020 as well. One of the catalysts in the 4-1 win over Russia, Damsgaard scored one of the goals, and he simply has to deliver the goods once again, keeping the profligacy of Yussuf Poulsen and Martin Braithwaite in mind.

This is a game that is unlikely to be as heavy a goal-fest as the one between Germany and Portugal or Sweden vs Poland. However, seeing as this will be a pressure cooker situation borne out of the occasion of a knockout tie, the two goalkeepers will surely be kept fairly busy. Keeping that in mind, it will eventually come down to which defensive unit can hold its nerve in the clutch moments.

It is here where Wales have the slightest of edges, seeing as they have only conceded twice in their three games so far. So, while Denmark might find the back of the net once, the Dragons ought to hold their own for the most part, while at the other end, Gareth Bale might come to the fore once again. With that in mind, The Hard Tackle predicts a 2-1 win for Wales, with Denmark out in the Round of 16.