Belgium will aim to seal the top spot in Group B, while Finland will hope to seal a place in the Round of 16 when they meet at the Krestovsky Stadium on Monday.

The group stage of UEFA Euro 2020 is nearly reaching its climactic end, and the final of the Round of 16 qualifiers are set to be confirmed in the coming week. Group B is wide open, with the coveted second spot still up for grabs. Finland will be aiming to grab that spot on Monday when they take on Belgium at the Krestovsky Stadium.

Finland, on debut in a major international tournament, have endured a mixed bag of a campaign at UEFA Euro 2020 so far. Having said that, in both the matches, the Huuhkajat have appeared to be suspect at the back, meaning they could be ripe for the taking against Belgium. Last time out, Markku Kanerva & co. were beaten 1-0 by Russia, in what was a blow to their qualification hopes for the Round of 16.

Belgium, on the other hand, have been one of the best teams on show in UEFA Euro 2020, winning each of their first two games so far. In fact, the Red Devils are one of only three teams to have a hundred percent record in the group stage after the opening two matchdays. Last time out, Roberto Martinez & co. battled from a goal down to beat Denmark 2-1 in Copenhagen.

Belgium and Finland played out a 1-1 draw the last time they locked horns, with Romelu Lukaku and Kasper Hamalainen on target for either side. Ahead of the latest meeting between the two sides, The Hard Tackle takes a closer look at the encounter.

Markku Kanerva does not have any fresh injury concerns hampering his preparations ahead of the final UEFA Euro 2020 Group A fixture against Belgium. On Monday, the Finland head coach will have a fully fit squad to choose from, with Jukka Raitala likely to be fit to start after sustaining a minor calf injury last time out against Russia.

Raitala should, therefore, take his place as the right wing-back versus Belgium, with Jere Uronen starting on the left flank. The key decision, though, will centre around the selection of Tim Sparv, with the Finland captain likely to be recalled to the starting lineup, replacing Rasmus Schuller.

Sparv will sit at the base of the midfield unit, receiving defensive support from Joni Kauko and Glen Kamara, with the duo also providing the forward impetus from the middle of the park. At the back, Joona Toivio, Paulus Arajuuri and Daniel O’Shaughnessy ought to form the three-man central defensive partnership again, protecting Lukas Hradecky in the Finland goal.

Finally, the strike partnership will once again be formed by veteran striker and talisman Teemu Pukki and rising star Joel Pohjanpalo. While Pukki will aim to break his duck at UEFA Euro 2020, Pohjanpalo will again be the X-factor for Finland against Belgium. 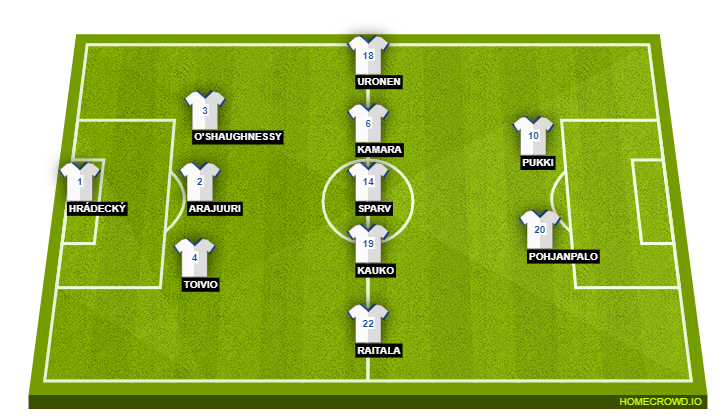 Unlike his counterpart in the Finland dugout, Roberto Martinez does not have each of the players he originally picked in the squad at his disposal. Timothy Castagne is sidelined for the foreseeable future and has withdrawn from the Belgium squad after picking up a nasty eye socket injury.

Meanwhile, with qualification to the Round of 16 secured, the Belgium head coach will aim to make a few key alterations to the starting lineup. In particular, Kevin De Bruyne, Axel Witsel and Eden Hazard will get the chance to boost their match sharpness as they look to continue their comeback trails from their respective fitness issues.

Hazard and De Bruyne will likely be deployed as the two attacking midfielders behind Romelu Lukaku, who will lead the line for Belgium against Finland. Witsel, meanwhile, will sit in the middle of the park, looking to break up Finland plays, with Youri Tielemans likely to be his partner in midfield.

Out wide, the two wing-backs will be crucial in providing width higher up the pitch, with Thomas Meunier and Yannick Carrasco likely to start on the flanks. Finally, Jason Denayer will lose his place in the three-man central defensive unit, with his place being taken by Leander Dendoncker, who will partner Toby Alderweireld and Jan Vertonghen. 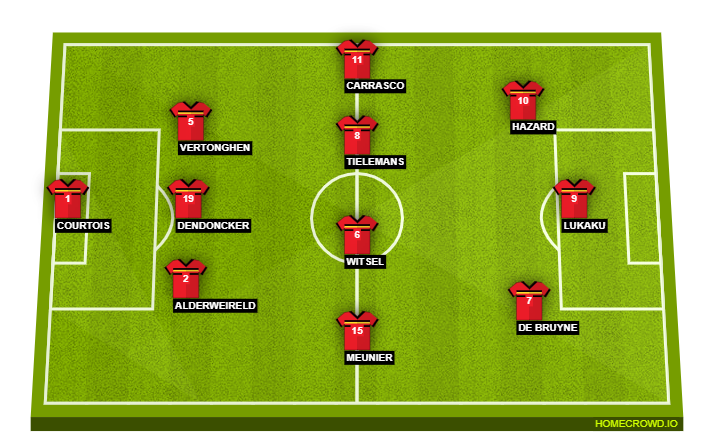 One major decision in the second game featuring Finland was the exclusion of Tim Sparv. The absence of the Finland captain was telling, as the Huuhkajat were easily overrun in midfield, which might not have been possible in the presence of the 34-year-old.

Set to come in for Rasmus Schuller on Monday, Sparv will aim to keep a lid on the output of Kevin De Bruyne and Eden Hazard, which will be important to frustrate Belgium and stretch the game as much as possible. A big game beckons for Sparv and Finland.

Kevin De Bruyne did not look like he missed a step after making his comeback from injury last time out. Eden Hazard grabbed the assist for De Bruyne’s goal and showed some fine touches. However, he is clearly still some way off his peak sharpness. And what better way to do that than with his first start of UEFA Euro 2020,

Hazard will have the chance to take on a vulnerable Finland defence, which can, in turn, give him the required confidence to become one of the key players for Belgium going deep into the Euro. Will the Belgium captain rediscover some of his best levels?

This is a game that can potentially have a lot of fine margins. However, with Finland likely to push for goals to seek qualification to the Round of 16, spaces could open up at the back for Belgium to exploit as the game progresses. None of the last five encounters involving Finland and Belgium have produced more than two goals, but this one should be slightly different.

Expect Eden Hazard, Kevin De Bruyne and Romelu Lukaku to impress, with Belgium being fairly comfortable over the course of the game. As a result, The Hard Tackle predicts a 3-0 win for Roberto Martinez & co. as they confirm their status at UEFA Euro 2020 Group B winners, while Denmark will wait for the results elsewhere to confirm their fate.