Top spot in Group D of UEFA Euro 2020 will be on the line when Czech Republic face England at Wembley on Tuesday.

Just a couple of more days remain for the curtains to fall on the group stages of UEFA Euro 2020. Just two matches will be on show on Tuesday, with the final shape of Group D set to be confirmed. The top two teams in the group will face off at Wembley, as Czech Republic lock horns with hosts England.

Czech Republic have been one of the surprise packages of UEFA Euro 2020 so far. The Lokomotiva are one of only seven teams to be still unbeaten, having beaten Scotland 2-0 in their opening game before holding Croatia to a crucial 1-1 draw. Ahead of England on goal difference, Jaroslav Silhavy’s men now have the golden opportunity to top Group D after Tuesday’s games.

England, on the other hand, have been one of the more disappointing teams up until now, even though they are yet to lose a game. After all, a superstar-laden team has only managed to find the back of the net once in two games, with the goalless draw versus Scotland being a collective performance that left a lot to be desired.

Czech Republic came from a goal down to grab a 2-1 win the last time they clashed with England, with Harry Kane scoring an early penalty before Jakub Brabec and Zdenek Ondrasek inspiring the comeback. Ahead of the latest meeting between the two sides, The Hard Tackle takes a closer look at the encounter.

💬 "It's a great feeling to be the leading goalscorer of the tournament right now and to be ahead of all the great players. But there still are a lot of matches ahead of us within the tournament. And my main aim is the team success, not an individual trophy."

Jaroslav Silhavy does not have any fresh injury concerns hampering his preparations ahead of the final Group D clash of UEFA Euro 2020 against England. On Tuesday, the Czech Republic boss will have a fully fit squad at his disposal, with Jiri Pavlenka still the only withdrawal from the squad.

Pavlenka’s absence is not a major source of concern anyway, with Tomas Vaclik impressing in the tournament already. Vaclik ought to retain his place between the sticks once again, with Czech Republic lining up in a 4-2-3-1 formation against England.

Ondrej Celustka and Tomas Kalas ought to pair up at the heart of the Czech defence, with Vladimir Coufal and Jan Boril being the two full-backs. Up ahead in midfield, Tomas Soucek and Tomas Holes will line up in the double pivot, with the duo tasked with keeping a lid on Jack Grealish’s output.

The creative impetus for Czech Republic will be provided by Vladimir Darida, while Soucek will threaten England with his late runs into the box in addition to his aerial prowess in set-piece situations. Lukas Masopust and Jakub Jankto will be the two wide men for Czech Republic, with the in-form Patrik Schik leading the line against England. 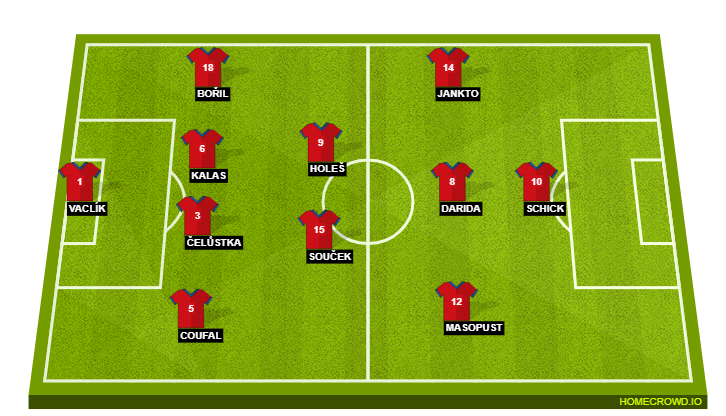 As has been the running theme for him, Gareth Southgate has been bogged down by a fresh roster issue for the third successive time ahead of his side’s final group game. After already losing Trent Alexander-Arnold and Dean Henderson, the England head coach could now be without two more squad members against Czech Republic.

Ben Chilwell and Mason Mount are currently self-isolating after coming in close contact with COVID-19 positive Billy Gilmour in the aftermath of the goalless draw with Scotland last time out. The rest of the England squad has tested negative for the coronavirus and are set to feature versus Czech Republic on Tuesday.

In the potential absence of Mount, Jack Grealish could end up reprising the no. 10 role for England unless Southgate chooses to shift from a 4-2-3-1 to a 4-3-3 formation. Jadon Sancho has oddly been kept away from the action up until now by the England boss but is in line for a recall in the wake of a couple of sub-par displays by Phil Foden.

The remaining two attacking players pick themselves, with Raheem Sterling being one of the go-to players for Southgate while England captain Harry Kane is indispensable despite his dreadful performances for the Three Lions so far.

In midfield, Kalvin Phillips has been largely impressive up until now and ought to start alongside Declan Rice in the double pivot. As for the defence, Tyrone Mings is expected to keep hold of his spot at the heart of England’s backline, with John Stones being his partner. Luke Shaw and Kieran Trippier should be the two full-backs, with Jordan Pickford taking his place between the sticks. 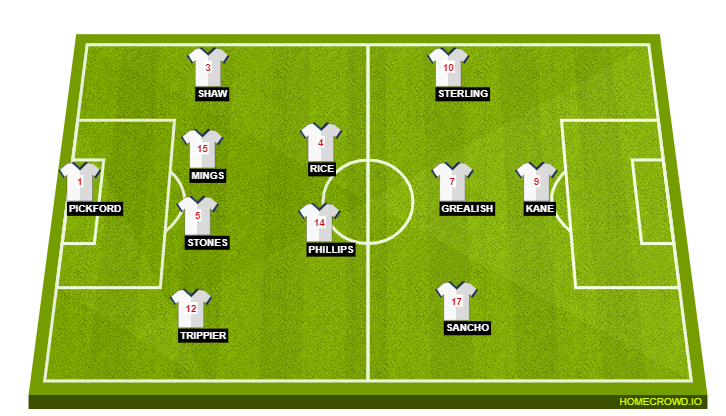 Patrik Schick has been mighty impressive for Czech Republic so far at UEFA Euro 2020 and will once again be under the spotlight on Tuesday. Tomas Soucek is always someone to look out for and will be the key player in midfield. However, if England are to be frustrated for a second successive game, it is Tomas Vaclik who will need to be at his very best.

The 32-year-old was in inspiring form against Scotland and eventually proved to be one of the catalysts in the 2-0 win. Vaclik will need to reproduce such heroics versus England in order to give the front-men the chance to seal a big win and claim the top spot in Group D.

As for England, if they are to embark on an upswing in fortunes and get back to winning ways, they will have to create chances galore, and that responsibility will fall on the shoulders of Jack Grealish. Set to be given a chance to impress in the absence of Mason Mount, Grealish will have a lot riding on him.

With Harry Kane being a shell of his domineering self so far at UEFA Euro 2020, Grealish could be the one to take on the Czech defence with his directness, which could also help Raheem Sterling. This really could be the big break that Grealish has been yearning for amid uncertainty surrounding Mount.

Very few would have predicted Czech Republic to raise their game so much heading into UEFA Euro 2020. Yet, Jaroslav Silhavy & co. have been one of the pleasantly surprising teams in the competition to date and head into the game against England with a chance to top Group D, which gives them a chance to exact a bit of revenge.

After all, Czech Republic ended the UEFA Euro 2020 Qualifiers as runners-up behind England. This time around, though, they could condemn the Three Lions to second spot in a group featuring the two. Therefore, The Hard Tackle predicts a 1-1 draw that will confirm Czech Republic as Group D winners and England as runners-up.