Belgium will aim to book their place in the UEFA Euro 2020 Round of 16 when they take on Belgium at the Parken Stadium in a Group B tie on Thursday.

Matchday 2 of UEFA Euro 2020 gets underway this midweek and three games will be on show on Thursday. The second fixture on the day will be played at the Parken Stadium in Copenhagen, where Denmark will play hosts to pre-tournament favourites Belgium, hoping to stay alive in the competition.

Denmark made a mortifying start to their UEFA Euro 2020 campaign, as their opener against Finland was marred by the incident involving Christian Eriksen, who suffered a cardiac arrest in the first half. And, if not for the swift actions of referee Anthony Taylor as well as the medical staff present at the stadium, things could have taken an even more harrowing turn.

Eriksen has since provided a positive update on his condition while on the same day, his teammates soldiered on to continue the match before being beaten 1-0 by Finland. The challenge does not get any easy for Denmark in Matchday 2, with top-ranked Belgium paying them a visit up next.

Speaking of, the Red Devils were thoroughly professional in their campaign-opening fixture, easing past Russia with a 3-0 win. Roberto Martinez & co. are currently on a ten-game unbeaten run, with the Belgium head coach on the cusp of equalling the record for overseeing most wins for the side at the European Championships, with Guy Thys currently on eight wins in the competition.

Belgium were 4-2 victors in a thrilling UEFA Nations League match-up the last time they faced off against Denmark. Ahead of the latest meeting between the two sides, The Hard Tackle takes a closer look at the encounter.

The big news from the Denmark camp is, of course, the unavailability of Christian Eriksen, who is out of action for the foreseeable future at the very least if not for good. Otherwise, head coach Kasper Hjulmand has a fully sit squad at his disposal, although the headspace of his players is one big if at the moment.

Indeed, Simon Kjaer was taken off by the Denmark boss due to his mental struggles immediately after the incident involving Christian Eriksen, who is a close friend of the Denmark captain. Having said that, as things stand, Kjaer is expected to take is place in the central defensive partnership, where he will pair up with Andreas Christensen.

Out on the flanks, Daniel Wass and Joakim Maehle ought to be the two full-backs, with the duo holding the key in both the phases of the game. While they will need to remain disciplined and compact in the defensive stages, their deliveries from their respective flanks will need to be inch-perfect to bring the three forwards into play. In goal, there is no looking past Kasper Schmeichel.

Hjulmand is likely to change his system up a bit on Thursday due to the absence of Eriksen, shifting to a 4-3-3 setup, with Mathias Jensen lining up alongside Thomas Delaney and Pierre-Emile Hojbjerg in the three-man unit. Hojbjerg will sit at the base of the midfield, receiving defensive support from Delaney and Jensen, who will also need to provide the forward thrust.

Finally, in attack, Kasper Dolberg is likely to get the nod to lead the line for Denmark against Belgium, with Martin Braithwaite and Yussuf Poulsen being the two wide men. Braithwaite, in particular, put in a spirited display in the second half against Finland and will be the danger man for Denmark on Thursday. 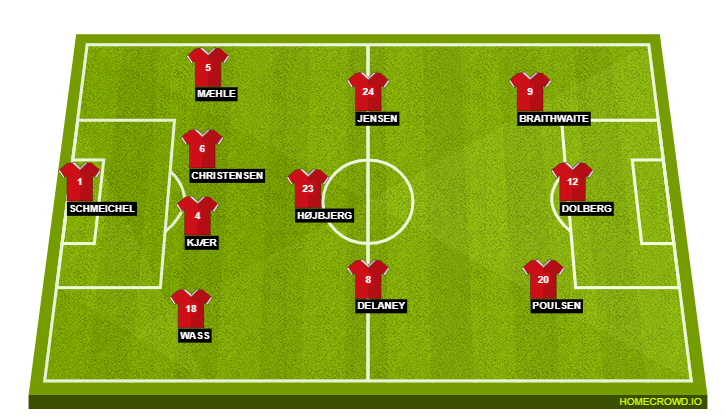 Like his counterpart in the Denmark dugout, Roberto Martinez suffered a major blow on the team news front in his side’s opening game of UEFA Euro 2020.  The Belgium head coach will have to make do without Timothy Castagne for the remainder of the tournament after he sustained a double eye socket fracture against Russia.

However, there is some good news as well, with key midfielders Kevin De Bruyne and Axel Witsel set to be a part of the matchday squad against Denmark. As per the accounts of Youri Tielemans and Dennis Praet, Witsel looks particularly sharps despite only recently recovering from an Achilles injury.

On the 9th of January Axel Witsel ruptured his achilles tendon.

On Thursday he’ll be on the bench for Belgium’s game against Denmark.

That’s a return after 5 months and 8 days.

Callum Hudson-Odoi spent a similar spell on the sidelines. Returned after 5 months and 3 days. pic.twitter.com/4RV3oStMpH

However, it is unlikely that either player will feature from the get-go against Denmark, with Martinez likely to afford them enough time to regain their sharpness entirely. So, Tielemans and Leander Dendoncker ought to pair up in the middle of the park, with De Bruyne and Witsel likely to appear off the bench later in the game to get some crucial game-time under their belts.

Like the midfield duo, captain Eden Hazard is also being eased in by the Belgium boss and he is not expected to start versus Denmark. In his stead, Yannick Carrasco ought to once again feature on the left flank, with Dries Mertens a certainty on the right wing. Meanwhile, spearheading the Belgium attack will be Romelu Lukaku.

In Castagne’s absence, Thomas Meunier becomes an automatic pick as the right wing-back after a solid display last time out, with Thorgan Hazard expected to feature as the left wing-back. The rest of the team pretty much picks itself, with Thomas Vermaelen coming in for Jan Vertonghen, who is likely to be rested after sustaining a knock on the ankle. Thibaut Courtois, Dedryck Boyata and Toby Alderweireld are certainties. 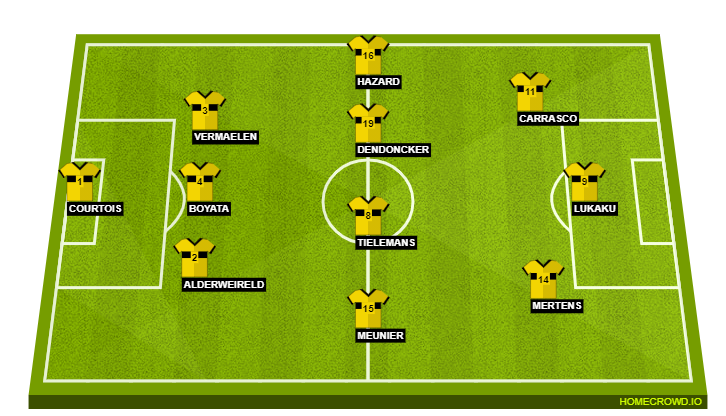 Can Kasper Schmeichel rally himself and his Denmark teammates with a big display? (Photo by Elsa/Getty Images)

Schmeichel was among those who put up a brave front against Finland and battled hard till the full-time whistle blew. However, it was clear that he was not in the right frame of mind as it was his inability to keep out Joel Pohjanpalo’s straightforward shot that proved to be the difference in the end.

Against Belgium, the Denmark no. 1 will face an even sterner test in the form of Romelu Lukaku, who is in the form of his life at the moment. If he has managed to regain his composure by now, a resolute performance could be on the cards. If not, then Belgium could well run riot on Thursday.

Speaking of, Lukaku is indubitably once again the most pivotal player for Belgium. With Kevin De Bruyne still some way off being at his sharpest and Eden Hazard being given enough time to be ready for the latter stages of the competition, Lukaku has the onus on him to deliver the goods yet again.

Two goals in the first game against Russia was the ideal way to kick-start what could be a campaign to remember for the star striker and Belgium as a unit. Another big performance against Denmark will set the tone for what is to come in the knockout stages and Lukaku will look to get the job done in time.

In the form of his life. (Photo by Yorick Jansens/AFP/Getty Images)

The fixture list is the same for everyone, but in the context of what transpired just a few days ago, it is nothing but cruel on Denmark. Kasper Hjulmand will be trying his utmost to keep the spirits up, while Christian Eriksen himself has urged his teammates to battle hard for the rest of their UEFA Euro 2020 campaign.

The players will still aim to put on a big display for their friend, but in Belgium, they are up against a team that is thoroughly professional and has very few chinks in the armour. With Romelu Lukaku being at the top of his game, the Red Devils ought to complete a straightforward 2-0 win, with Denmark putting up a fight in sections of the game.