Finland will look to take a step closer to the Round of 16 while Russia will aim to kick-start their UEFA Euro 2020 campaign in the Matchday 2 tie on Wednesday.

The UEFA Euro 2020 is finally starting to deliver the goods, with some fascinating results already produced. Matchday 2 of the group stage begins this midweek, with teams either looking to book their place in the Round of 16 or keep their campaign alive. One such meeting will pit Finland up against Russia in St Petersburg on Wednesday in a Group B tie.

Finland are participating in the Euro for the very first time in their history and their maiden game in this edition was a difficult one, as it was marred by the cardiac arrest suffered by Denmark’s Christian Eriksen. The Huuhkajat, though, managed to hold their nerve after the resumption of the match to grab a 1-0 win that puts them second in the group, behind Belgium on goal difference.

Russia, on the other hand, are participating in their fifth consecutive European Championships and are coming off the back of a memorable campaign the last time they participated in an international tournament – the FIFA World Cup 2018 at home. However, Stanislav Cherchesov & co. have not made the best of starts at UEFA Euro 2020, with Belgium grabbing a comprehensive 3-0 win in their opening game.

Russia were comfortable 3-0 victors the last time they faced off against Finland in a FIFA World Cup 2010 qualification match-up. Ahead of the latest meeting between the two sides, The Hard Tackle takes a closer look at the encounter.

Markku Kanerva has been handed a boost on the team news front ahead of the trip to St Petersburg to take on Russia in their second-ever UEFA Euro 2020 match. On Wednesday, the Finland head coach is likely to have a full-strength squad at his disposal, with Nikolai Alho taking part in full training for the first time.

There was a brief scare as Joon Toivio did not take part in training on Monday due to a sore toe. However, the 33-year-old is expected to be available for Finland’s meeting with Russia and should take his place in the three-man central defensive unit alongside Paulus Arajuuri and Daniel O’Shaughnessy, with Lukas Hradecky a certain starter in goal.

The creative impetus will come from the two wing-backs Jere Uronen and Jukka Raitala, with the duo tasked with sending in inviting deliveries from the flanks, while the three midfielders – Glen Kamara, Robin Lod and captain Tim Sparv – will aim to hold the fort and cut out the spaces for Aleksandr Golovin to work around.

Finally, the strike partnership will be formed by Teemu Pukki and Joel Pohjanpalo who will aim to deliver the goods once again after scoring the winner against Denmark in the Matchday 1 clash last week. 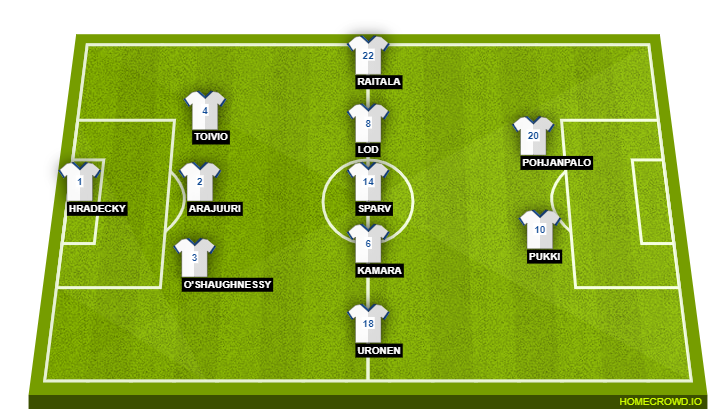 Unlike his counterpart in the Finland dugout, Stanislav Cherchesov has one injury concern to deal with ahead of the meeting with Finland. In the Group B clash on Wednesday, the Russia head coach will be bereft of the services of Yuri Zhirkov, who remains on the sidelines.

Cherchesov chose to line Russia up in a 4-2-3-1 formation against Belgium in a decision that did not really pay any dividends. However, the Russia boss is expected to keep faith in the system, with the hosts once again lining up in the same formation in front of Anton Shunin, who will need to be much improved after a sub-par showing last time out.

At the heart of Russia’s defence, Andrei Semyonov and Georgi Dzhikiya are expected to pair up, with Mario Fernandes and Vyacheslav Karavayev being the two full-backs, who will supply the crosses into the Finland box while remaining compact in the defensive stages.

Up ahead in midfield, the onus will be on Dmitri Barinov and Magomed Ozdoyev to keep things tight and stifle Finland’s build-up play. The creative impetus, though, will fall on the shoulders of Aleksandr Golovin, who, along with Aleksei Miranchuk, will supply the final balls for captain Artem Dzyuba, with Roman Zobnin completing the attacking unit. 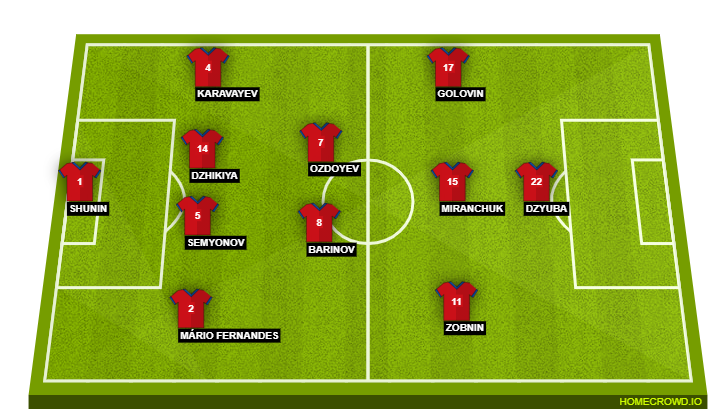 The player who had a big role to play in bringing Finland to UEFA Euro 2020, Teemu Pukki has become a cult hero for fans back home in Finland. However, after a bit of an average display last time out against Denmark, Pukki will be intent on getting on the board and help his side reach the Round of 16.

Overshadowed by Joel Pohjanpalo last time out, Pukki will be eager to set the record straight and show that he also has a lot to offer in Markku Kanerva’s side. And, if he can also come to the part then he, along with Pohjanpalo, will have forged a formidable attacking unit that will be hard to stop for Russia.

From one striker to another, Dzyuba has to step up after a poor performance against Belgium, as Russia stare down the barrel. With a win being imperative for Russia to keep their UEFA Euro 2020 campaign alive, Dzyuba’s output on Wednesday will be critical.

However, with Finland being a resolute team on the defensive front, the Russia captain will have his work cut out on Wednesday. The veteran striker has to pull out every trick out of his sleeve in order to ensure a positive result. But will he deliver the goods or be underwhelming once again?

This is one of those games wherein it is extremely difficult to separate the two sides on quality. Finland are a stubborn team at the back and Russia will once again find it difficult to carve open the required spaces to trouble the opposition goalkeeper.

Even if they do find a scoring opportunity, the imperious Lukas Hradecky will likely stand in their way, meaning Artem Dzyuba & co. could be in for a long night. On the opposite end, Teemu Pukki ought to break his duck at UEFA Euro 2020, which will be enough to inspire Finland to a second successive win and a result that takes them through to the knockout stages.