Portugal will begin the defence of their crown on Tuesday when they take on Hungary at the Puskas Arena in a UEFA Euro 2020 Group F clash.

Matchday 1 of UEFA Euro 2020 comes to an end on Tuesday, with two games on show on the day. In what is billed as the group of death, the four Group F teams will be in action, with the first game on the day pitting holders Portugal against Hungary at the Puskas Arena.

Hungary had to take the scenic route to qualify for the Euro for only the fourth time in their history. The Magyarok only managed a fourth-place finish in a five-team Group E in UEFA Euro 2020 Qualifiers but earned the ticket to the playoffs on the back of their exploits in the inaugural edition of the UEFA Nations League.

In Path A of the playoffs draw, Hungary beat Bulgaria and Iceland to book their place in the finals. And heading into the group stage Marco Rossi & co. have been in decent touch, having not lost any of their last 11 games. Portugal, on the other hand, are making their eighth appearance in the Euro and are the current holders of the Henri Delaunay trophy after beating France in the 2016 edition.

A Selecao qualified for UEFA Euro 2020 by clinching an automatic berth, although they were made to work hard in their qualifying campaign, finishing runners-up behind Ukraine. Portugal have subsequently been drawn in the group of death along with France, Germany and Hungary and warmed up for the competition with a 4-0 win over Israel last week.

Portugal were 1-0 victors the last time they faced off against Hungary, with Andre Silva scoring the only goal in the game. Ahead of the latest meeting between the two sides, The Hard Tackle takes a closer look at the encounter.

Marco Rossi has been handed a major setback on the team news front heading into UEFA Euro 2020 as star midfielder Dominik Szoboszlai has missed the cut due to his ongoing recovery from an injury. In addition, the likes of Szilveszter Hangya, Csaba Spandler and Balazs Toth have also been unable to regain fitness in time for the tournament.

Rossie is likely to set Hungary up in a 3-5-2 formation, with Peter Gulacsi taking his place in goal. In front of him, the onus will be on Willi Orban, Attila Szalai and Attila Fiola to remain compact to snuff out the space that someone like Cristiano Ronaldo needs to wreak havoc.

During the defensive phases, Hungary will settle into a 5-3-2 shape, with the two wing-backs – Gergo Lovrencsics and Filip Holender – dropping deep to support the central defenders. This will push Portugal to adopt a long ball approach, which can then help Hungary absorb much of the pressure when off possession.

When they do have the ball, Rossi’s men will depend on Andras Schafer and Laszlo Kleinheisler to provide the forward thrust from the central areas, while also giving enough defensive support to Adam Nagy, who will likely sit at the base of the midfield unit.

Finally, in attack, the strike partnership will be formed by Roland Sallai and captain Adam Szalai, who will both aim to remain central to put pressure on the Portugal centre-backs. The duo will depend on the service from the two wing-backs, whose deliveries from either flank will be vital. 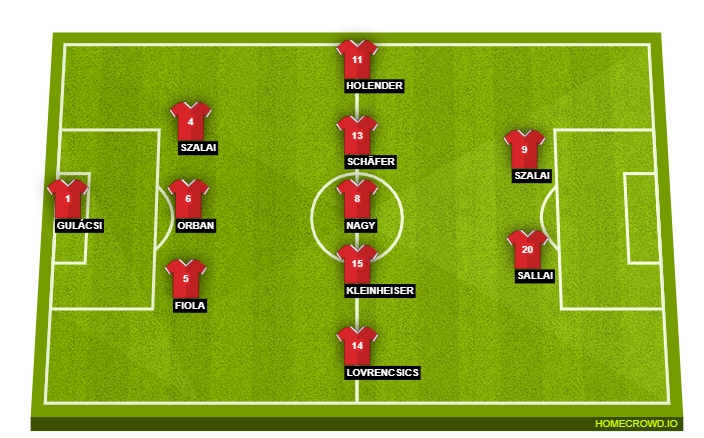 Like his counterpart in the Hungary dugout, Fernando Santos has received a major blow heading into his team’s first match at UEFA Euro 2020. Joao Cancelo has had to withdraw his name from the Portugal squad after testing positive for the coronavirus, with Diogo Dalot taking his place.

Uncapped by the national side so far, Dalot will likely be the backup to Nelson Semedo, who is now set to feature as the first-choice right-back for Portugal at the Euro. Otherwise, there are hardly any notable absentees for A Selecao, with Pedro Neto the only unfortunate one to miss the cut in the 26-man squad due to an injury.

As iterated, Semedo is set to start as the right-back against Hungary, with Raphael Guerreiro being a certainty on the left flank. The 27-year-old will be a crucial player for Portugal during the build-up phases, as his presence in the final third will allow Diogo Jota – likely to start as the left-winger – to veer infield and play off of Cristiano Ronaldo.

At the heart of Portugal’s defence, there is no looking past Ruben Dias and Pepe, although Jose Fonte is also pushing for a start after a phenomenal 2020/21 campaign with Lille. The defensive line will provide cover to Rui Patricio, who is an automatic pick between the sticks.

Up ahead in midfield, Santos has a major selection dilemma, with Danilo Pereira, Joao Moutinho, Ruben Neves and William Carvalho vying for the two double pivot spots. Against Hungary, Danilo and Moutinho are likely to get the nod, with Neves and Carvalho waiting in the wings to get a chance to impress.

The creative impetus will be provided by Bruno Fernandes and Bernardo Silva, who will dominate the right-hand channel, and aim to set Ronaldo and Jota up with numerous chances. Andre Silva, Pedro Goncalves and Joao Felix will likely be backup options who will be called upon later on in the game. 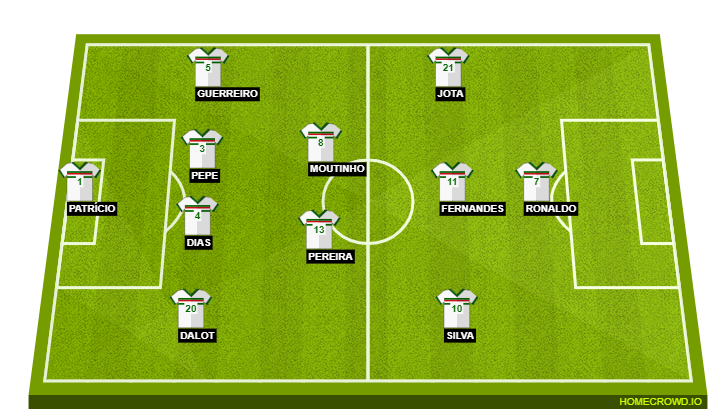 Much of the focus in the match will be on Cristiano Ronaldo and how he fares in the final third. While Hungary’s centre-backs will surely have their task cut out to stop the Portugal captain in his tracks, they are unlikely to be enough to thwart him, which is where Peter Gulacsi comes in.

The Hungary vice-captain is likely to deal with a barrage of shots on Tuesday, with several of those likely to come from the boots of Ronaldo. So, if Marco Rossi & co. are to remain a factor in Group F and start with a bang, how Gulacsi performs in goal will be critical. A big game beckons.

Ronaldo is indubitably the Player in Focus at UEFA Euro 2020, let alone the game against Hungary on Tuesday. At 36, the legendary forward is showing no signs of slowing down anytime soon and continues to be one of the most prolific players in international football, the world over.

Placed in the group of death, Ronaldo will need to be on the money in each of the three games that Portugal play and a strong start against Hungary will be imperative. With that in mind, Ronaldo and his battle with Hungary’s defensive unit will be the one key battle to watch out for.

Hungary have more than held their own against some of the stronger teams in Europe in recent times, so they are surely not a team to be taken lightly. However, in Portugal, they face a well-drilled unit that will be hard to conquer, at least in the final third.

In addition, a mighty attacking unit, comprising of Cristiano Ronaldo, Bruno Fernandes, Bernardo Silva, Diogo Jota, Joao Felix, Andre Silva and Pedro Goncalves, will take some stopping, and that is unlikely to happen on Tuesday. With that in mind, The Hard Tackle predicts a 2-0 win for Portugal, who will get a run for their money before sealing all three points.