Argentina will be hoping to kick-start their Copa America 2021 campaign with a bang when they take on Chile at the Olympic Stadium in Rio de Janeiro.

The long-awaited Copa America is finally underway, although the lead up to the tournament has been far from ideal. Originally scheduled to take place in Argentina and Colombia, the effects of the coronavirus pandemic forced the competition to be shifted to Brazil, which brought its fair share of challenges. Nevertheless, we have begun and Argentina will start their campaign when they face Chile in Rio de Janeiro.

Argentina have been forged into one of the more solid teams in world by Lionel Scaloni, although their offensive output has been questionable at times. Nevertheless, La Albiceleste head into Copa America on the back of a 14-game unbeaten run, with their last defeat coming in Copa America itself, a couple of years ago.

Chile, on the other hand, have been a bit of a mess in recent times, having won just three of their last 13 clashes across all competitions. With the ageing core reaching the end of the line soon, the results have been reflective of the same, although La Roja have made a solid enough start to life under the tutelage of Martin Lasarte, winning one and drawing the other game.

Argentina and Chile played out a 1-1 draw the last time they faced off against each other – just ten days ago – with Lionel Messi and Alexis Sanchez being the goalscorers. Ahead of the latest meeting between the two sides, The Hard Tackle takes a closer look at the encounter.

Lionel Scaloni has not sprung any surprises when it comes to the final squad he has picked for the 2021 Copa America. The major absentees for Argentina are Juan Foyth, Emiliano Buendia and Lucas Alario, although none of the three players would have been regular fixtures in the group.

Emiliano Martinez has been stepping up for the better part of the past year and the 28-year-old is set to take his place in goal. In front of Martinez, Argentina will line up in a 4-3-3 formation, with both Cristian Romero and Nicolas Otamendi holding the key against the nippy Alexis Sanchez.

Marcus Acuna ought to be the preferred choice for the left side of the Argentina defence, with Gonzalo Montiel the automatic pick on the opposite flank. Up ahead in midfield, Leandro Paredes is likely to be the deepest of the three midfielders, looking to keep a lid on Chile’s approach play from the central areas.

Paredes will receive defensive support from Giovani Lo Celso and Rodrigo De Paul, with the duo primarily being tasked with providing the forward thrust from the central positions. Finally, a star-studded attack should line up with Lautaro Martinez, Angel Di Maria and captain Lionel Messi, who will aim to pull the strings for Argentina and drive home a positive result. 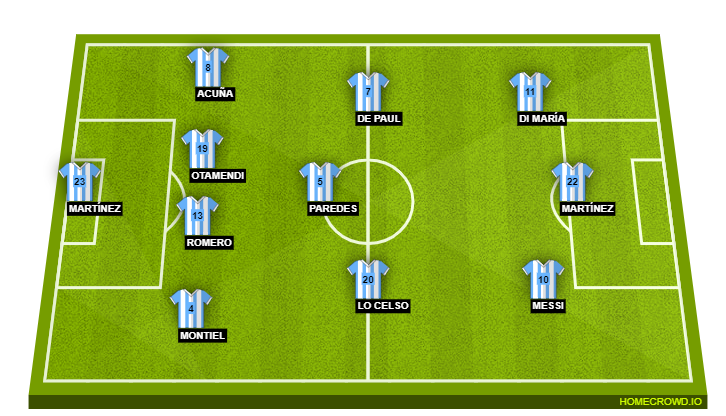 Like his counterpart in the Argentina dugout, Martin Lasarte has not made major alterations to the squad that was picked last time out as Chile prepare to head into the 2021 Copa America with their strongest possible group. Veteran duo Jean Beausejour and Fabian Orellana are the only notable absentees for La Roja.

The composition of the team has not really changed over the past decade or so, even though the performance levels are no longer the same. Nevertheless, Claudio Bravo will take his place in goal for Chile, who will be set up in a 4-4-2 formation against Argentina.

Gary Medel and Guillermo Maripan will likely form the central defensive partnership, with Mauricio Isla and Eugenio Mena being the two full-backs for Chile. Up ahead in midfield, the onus will be on Arturo Vidal and Charles Aranguiz to cut off the supply to Lionel Messi, with Aranguiz also in charge of providing the forward thrust from midfield.

Erick Pulgar and Jean Meneses ought to be the two wide midfielders, who will provide width in the final third and also supply the deliveries when afforded the chance to do so. Finally, the strike partnership should be formed by Eduardo Vargas and Alexis Sanchez, who will be the pivotal player for Chile at the Copa America. 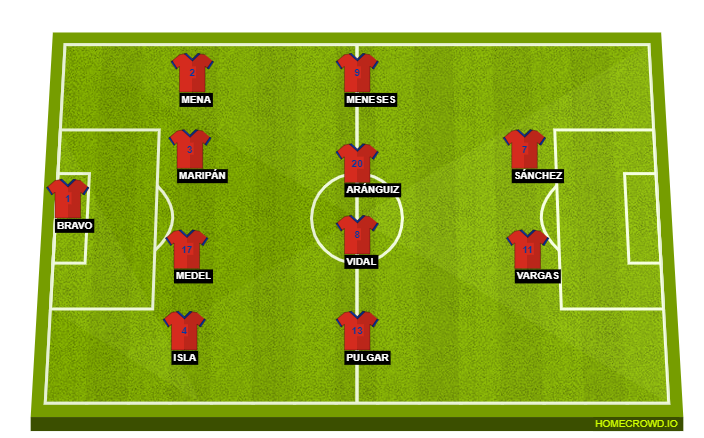 Who else but the diminutive genius? Lionel Messi has been in phenomenal touch since the turn of the year and after the heartbreak with Barcelona in La Liga, he will be raring to get going at the 2021 Copa America. Yet to taste success at the international level, Messi will be desperate to get the proverbial monkey off his back.

Their only real competition appears to be in the form of the other traditional South American powerhouse, Brazil, and Messi will be aware that he will need to be at his very best before the inevitable meeting with the Selecao. Therefore, starting strong is imperative and a solid showing against Chile will set Messi and Argentina up well for the rest of the tournament.

Argentina seem to be holding all the aces heading into their Copa America opener against Chile. However, having said that, this game is likely to be bereft of goals, with neither side likely to overpower their opposition defensive units to begin with. In the end, though, the Lionel Messi factor will be undeniable and that is why The Hard Tackle predicts a 1-0 win for Argentina.