England will hope to kick-start their UEFA Euro 2020 campaign on a strong note when they welcome Croatia to Wembley in a Group D clash on Sunday.

The UEFA Euro 2020 is underway, with Italy kicking things off with a win over Turkey on Friday in the opener. The action starts to become frantic now in the group stage, with multiple matches on show every day. The opening game on Sunday will reignite a recent rivalry, as England play hosts to Croatia at Wembley in the lunch-time kick-off.

England have become an extremely consistent team under the tutelage of Gareth Southgate, losing just 10 times in 54 games to date. However, there is always a sense that the Three Lions can do so much more, and they can be quite one dimensional in their attacking plays. Nevertheless, England come into UEFA Euro 2020 on the back of a solid run of form, winning each of their last six games, conceding just once.

On the other hand, Croatia are set to enter a transition period soon, with the generation of players who took them to the FIFA World Cup 2018 final reaching the end of the line. Next year’s World Cup could be the final tournament for the group, but the effects of age have already started to show in their results, with the Vatreni winning just two of their last nine fixtures.

England were 2-1 victors the last time they locked horns with Croatia, in the first edition of the UEFA Nations League, with Harry Kane scoring the winner in the come-from-behind win. Ahead of the latest meeting between the two sides, The Hard Tackle takes a closer look at the encounter.

Gareth Southgate had a problem of plenty to deal with when it came to picking his final squad for UEFA Euro 2020. And surely enough, there are quite a few unlucky players who have missed the cut, with Jesse Lingard, James Ward-Prowse and Ollie Watkins being a few who stand out.

In addition, the England boss has also lost the services of Trent Alexander-Arnold, who sustained a thigh injury earlier this month. Ben White has been chosen to replace the 22-year-old, with Southgate choosing to have a beefed-up defensive unit at his disposal. Speaking of injuries, the England manager is also sweating over the fitness of two key players.

Who's going on the back of your #ThreeLions shirt?

Harry Maguire has recently resumed full training, but the match might have come too soon for him, considering he has been away from the field for the better part of the last month. The other major doubt is Jordan Henderson, who did feature in the friendly against Romania but looked well short on fitness levels.

Neither player is expected to start against Croatia, despite the game being a potential top-of-the-table clash. In the absence of Maguire, Southgate has a major tactical dilemma, as England could be vulnerable at the back. While he could revert to the 3-5-2 formation, he favoured at the 2018 FIFA World Cup, the fact that he has hardly utilised it in the three years since means England could stick to the 4-2-3-1.

Therefore, John Stones is likely to have Tyrone Mings as his central defensive partner, with Kyle Walker and Ben Chilwell being the two full-backs for England. In goal, there is no looking past Jordan Pickford, who tends to reserve his best football for the national side.

Up ahead in midfield, Kalvin Phillips is a certainty to pair up with Declan Rice in the double pivot in the absence of Henderson, with the 25-year-old pulling the strings from the middle of the park. The third midfielder will be Mason Mount, who will provide the creative impetus. Finally, in attack, Southgate is essentially like a child in a candy store, with the choicest of options to pick from.

Harry Kane, though, is a certainty in the final third, with the England captain leading the line versus Croatia. Raheem Sterling has been the go-to man for Southgate irrespective of his form and ought to take his place on the right-wing, while Marcus Rashford ought to be stationed on the left flank ahead of Phil Foden, Jadon Sancho and Jack Grealish, who ought to appear off the bench in the second half. 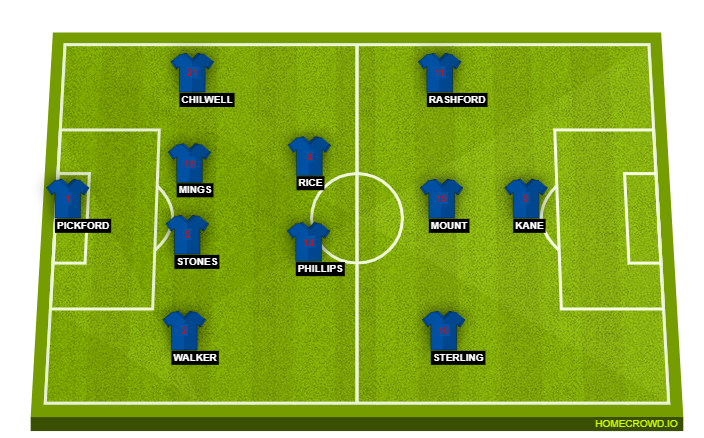 Unlike his counterpart in the England dugout, Zlatko Dalic hardly had any difficulties picking his final squad for UEFA Euro 2020, with Marin Pongracic the only notable absentee. Otherwise, there are very few alterations to the squad at the 2018 FIFA World Cup, with Ivan Rakitic the only major change for Croatia after his retirement from international football.

However, Dalic, like Southgate, is sweating over the fitness of a key defender, with Dejan Lovren recovering from a minor injury. The 31-year-old is unlikely to be fit enough to take the field against England, meaning Duje Caleta-Car will pair up with vice-captain Domagoj Vida at the heart of Croatia’s defence.

Out wide, there is no looking past Sime Vrsaljko and Borna Barisic as the two full-backs, with Dominik Livakovic expected to be the man between the sticks. Up ahead in midfield, Marcelo Brozovic will be the key player for Croatia, looking to cut off the supply line for Harry Kane.

Brozovic ought to have Matteo Kovacic for company in the double pivot, with the 27-year-old likely to have overcome his UEFA Champions League hangover after Chelsea’s win over Manchester City last month. Kovacic will provide the forward thrust from the middle of the park as well as defensive assistance to Brozovic when off the ball.

With Kovacic stationed in the double pivot, Luka Modric will have the freedom to express himself and set up the chances for the attacking trio by reprising the no. 10 role. Modric will play off the central striker, who ought to be Andrej Kramaric, with Ivan Perisic and Ante Rebic being the two wide men for Croatia. 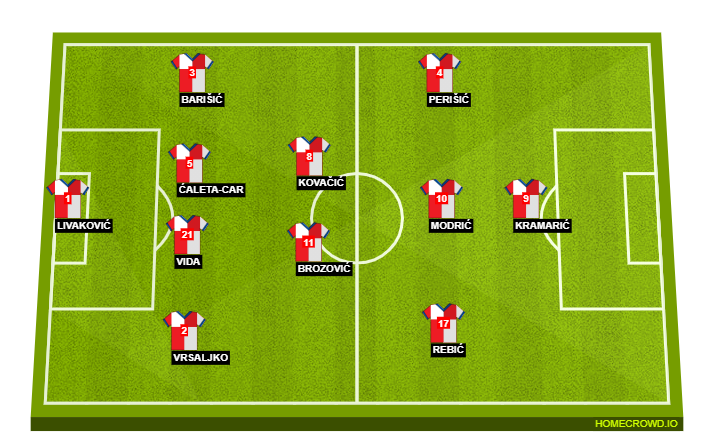 Will the England captain be on the money against Croatia? (Photo by Matthias Hangst/Getty Images)

Who else but the all-round genius that is Harry Kane? The 27-year-old once again enters a major international competition on the back of a productive campaign with Tottenham. He will be hungry to win the Golden Boot at UEFA Euro 2020, just as he did in the Premier League this past season, as well as the 2018 FIFA World Cup.

In order to do so, the England captain will need to be on the money from the get-go, and a suspect Croatia defence could well give him a chance to get going in a strong fashion. With Mason Mount and Marcus Rashford expected to create a bountiful of chances for him, one can expect Kane to kick off the Euro with a bang unless this man has something to say about it.

Marcelo Brozovic might not be marking Kane directly on Sunday. However, the experienced midfielder will still be critical in ensuring the England captain is left frustrated for much of the 90 minutes. After all, it is more important to cut off the supply line for Kane than to mark him out of the game, as his brilliant movement can stretch out a centre-back.

To that end, Brozovic will need to keep a check on Mason Mount’s output, which will then isolate the attacking trio in theory. Therefore, the 28-year-old faces a true test of his ability in what will be a key battle for him and Croatia on Sunday.

Can Marcelo Brozovic take some of the load off of captain Luka Modric? (Photo by Matthias Hangst/Getty Images)

Croatia have handed England some bitter blows over the past decade and a half or so. After all, it was the defeat to the Vatreni that condemned the Three Lions to miss the ticket to UEFA Euro 2008. And who can forget England’s defeat to Croatia in the FIFA World Cup 2018 semi-final.

This time around, though, things are a little different, with England jam-packed with match-winners while Croatia have been struggling quite a bit of late. With players like Phil Foden, Jadon Sancho and Jack Grealish likely to be introduced off the bench, it is hard to place your bets against Gareth Southgate’s charges.

So, all things considered, it looks like England are in a strong position to win their opening game at a Euro for the very first time, while Croatia’s run of three successive Matchday 1 victories is set to come to an end. With that in mind, The Hard Tackle predicts a 2-0 win for the hosts, in what will be a confidence-boosting result for them.