Wales and Switzerland will kick off their respective UEFA Euro 2020 campaigns when they face off at the Olympic Stadium in Baku on Saturday.

The long-awaited UEFA Euro 2020 is finally here, and the group stage kicks off on Friday in Rome, where Turkey will face off against Italy. The second Matchday 1 Group A fixture will pit Wales against Switzerland, with the two teams locking horns at the Olympic Stadium in Baku on Saturday.

Wales qualified for UEFA Euro 2020 by the skin of their teeth after what was a sub-par campaign in the Qualifiers. The Dragons finished second in their qualification group, with Slovakia and Hungary only narrowly missing the automatic qualifying spot. However, heading into the group stage, their preparations have been far from ideal, with manager Ryan Giggs not taking charge of the team amid a trial for assault charges.

In his stead, Rob Page is in temporary charge of Wales, who have failed to win both their games this month and desperately need to turn their form around. On the other hand, Switzerland made it to the European Championships after topping Group D in the UEFA Euro 2020 Qualifiers ahead of Denmark and the Republic of Ireland.

A broadly consistent team under the tutelage of Vladimir Petkovic, the Rossocrociati have been in and around the top ten of the world rankings for much of his reign. And Switzerland appear to be in good touch heading into the group stage, having won each of their last six games, with their most recent encounter being a 7-0 rout of Liechtenstein.

Wales were 2-0 victors the last time they clashed with Switzerland, in a UEFA Euro 2012 Qualifiers fixture, with Aaron Ramsey and Gareth Bale on target for the Dragons. Ahead of the latest meeting between the two sides, The Hard Tackle takes a closer look at the UEFA Euro 2020 encounter.

Robert Page has not chopped and changed a lot from the squad selected in March for the last international break. Instead, the Wales caretaker manager has chosen to keep faith in his regulars, while Aaron Ramsey, who missed out in March due to injury, is a part of the roster.

However, Page has been forced to make one change to his squad, with James Lawrence pulling out with an unspecified injury. In his stead, Wales have drafted Tom Lockyer in the defensive unit. As for the notable absentees, Tom Lawrence, Rabbi Matondo and Hal Robson-Kanu are among those missing out for Wales.

James Lawrence has been forced to withdraw from the squad due to injury and has been replaced by Tom Lockyer.

Page has altered between a back three and back four over the course of his reign as the interim Wales boss. However, on Saturday, it is likely that he will choose to essentially mirror Switzerland’s setup, with Wales being set up in a 3-4-3 formation.

Danny Ward ought to get the nod in goal ahead of Wayne Hennessey, with Chris Mepham, Joe Rodon and Ben Davies forming the three-man central defensive unit. The three centre-backs will look to remain compact at the back, cutting off the space for the Switzerland forwards to work around.

Up ahead in midfield, Aaron Ramsey will hold the key in providing the creative impetus, with Joe Allen sitting deep and holding the fort. Out wide, Connor Roberts and Neco Williams ought to get the nod to be the two wing-backs, with the duo providing the width higher up the pitch. During the defensive phases, though, they will drop deep to create a back five.

Finally, the Wales attack ought to comprise of Daniel James, the in-form Harry Wilson and captain Gareth Bale. Wilson will reprise the false nine role, with Bale and James being the two wide men, both of whom will aim to veer infield to create overloads and put the pressure on the three Swiss central defenders. 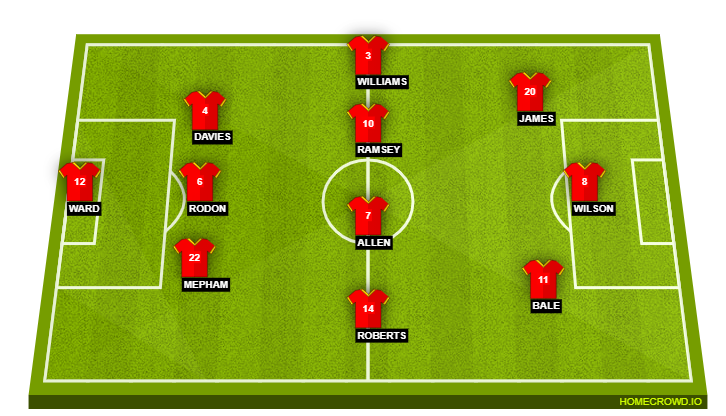 Like his counterpart in Wales’ dugout, Vladimir Petkovic has stuck to his guns, choosing to retain the players he has banked on for much of his reign as the Switzerland head coach. However, three players have been cut from the initial group that was picked as the preliminary squad.

Gregor Kobel, Dan Ndoye and Andi Zeqiri are those who miss out for Switzerland, while Michael Lang is the other notable absentee. On the tactical side of things, Petkovic has flitted between the variations of the 3-5-2 and the 3-4-3 during his time as the Switzerland boss, and against Wales, he should favour a 3-4-1-2 formation that he has preferred in recent games.

Yann Sommer will take his place between the sticks, with the three-man central defensive unit of Fabian Schar, Manuel Akanji and Nico Elvedi providing cover for him. Kevin Mbabu and Ricardo Rodriguez should be the two wing-backs, with the duo’s deliveries carrying a lot of threat, especially with two hefty strikers set to be stationed in the Wales box.

Captain Granit Xhaka, meanwhile, will need to be at his very best if the dangerous Aaron Ramsey is to be kept in check. Along with Remo Freuler, Xhaka will look to keep things tight in the middle of the park while also looking to initiate swift transitions to bring Xherdan Shaqiri into play.

Shaqiri has not played a lot of club football heading into UEFA Euro 2020, but his creative prowess still holds Switzerland in good stead. Finally, the strike partnership will be formed by Haris Seferovic and Mario Gavranovic, who has been in good touch heading into the group stage at UEFA Euro 2020. 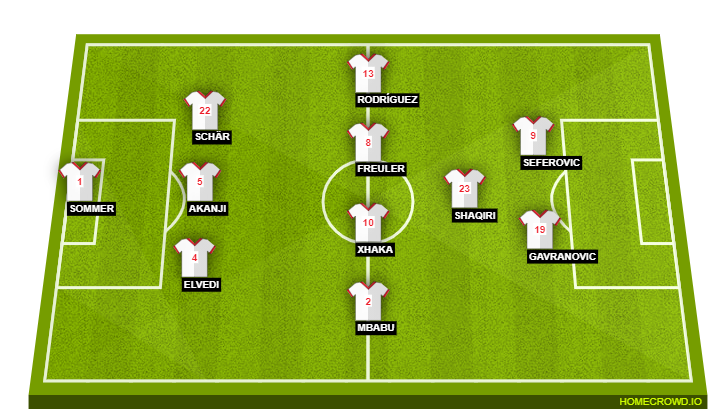 Will Bale make a mark on the big stage once again? (Photo by Paul Ellis/AFP via Getty Images)

Who else but captain fantastic Gareth Bale. The 31-year-old might or might not have the brightest of futures at club level, but he always tends to bring out the best version of himself when he takes the field with Wales.

With the heroes of UEFA Euro 2016 not quite being at the same level they were at half a decade ago, Robert Page will look towards Bale to bring out the big guns. If he does manage to be at his best, then Switzerland will have quite an uphill task to keep a check on Wales’ powerhouse forward.

If Switzerland are to deny Bale a lot of free space, from where he can wreak havoc, Granit Xhaka will be the go-to man for Vladimir Petkovic. While the 28-year-old will not directly mark Bale in the game, he will be in charge of keeping his team organised during the defensive phases, which will, in turn, frustrate the Wales skipper into delving into desperate measures.

At the same time, Xhaka will also hold the key in providing the forward during transitions while his prowess from range ought to keep Danny Ward on his toes constantly. A big match for the Switzerland captain, who will need to be at his all-round best to get his side over the line.

This is one of those games that will be too close to call. The two teams will essentially be battling Turkey for the second spot in a tight Group A, especially if Italy continue their irresistible run of form. Therefore, the game should be full of fireworks, with both Wales and Switzerland leaving it all on the pitch to get their campaign started with a bang.

Despite their indifferent form, Wales are quite a solid team and will not give the ball away cheaply too many times, if at all. However, the two Swiss wing-backs could cause Wales a world of trouble from the flanks, bringing the two strikers into play. On the opposite end, Gareth Bale will have a lot to say, but not enough to get his side over the line. With that in mind, The Hard Tackle predicts a 2-1 win for Switzerland.