Belgium will be aiming to wrap up their preparations for UEFA Euro 2020 when they welcome Croatia to the King Baudouin Stadium on Sunday.

The UEFA Euro 2020 is nearly upon us, with less than a week remaining for the group stage to kick off at long last. Before then, though, there is some business to be conducted, with the teams playing their final friendlies heading into the midweek. On Sunday, top-ranked Belgium will finish up their preparations, when they play hosts to Croatia at the King Baudouin Stadium.

Belgium have continued to go from strength to strength under the tutelage of Roberto Martinez, with hardly any team able to get anything off them in the last three years. However, going into the Euros, the golden generation will be desperate to break their duck, although their preparations have not started in the best possible way, after having been held to a 1-1 draw by Greece this week.

Croatia, on the other hand, have gone somewhat downhill since reaching the FIFA World Cup final in 2018. With their best players reaching the final stages of their respective careers, the Vatreni are clearly entering a period of transition, with next year’s World Cup likely to be the final tournament for the likes of Luka Modric and Ivan Rakitic. Like Belgium, Croatia played out a draw this week – a 1-1 stalemate against Armenia.

Belgium were 2-1 victors the last time they faced off against Croatia, with Romelu Lukaku scoring a match-winning hat-trick. Ahead of the latest meeting between the two sides, The Hard Tackle takes a closer look at the encounter.

There are no major changes on the team news front from the game against Greece last time out, with only the standby players starting to filter out slowly. Belgium boss Roberto Martinez, though, continues to have to make do without midfield powerhouses Kevin De Bruyne and Axel Witsel.

De Bruyne is still recovering from the facial fractures he sustained in the UEFA Champions League final last month and appears unlikely to be available for the first game of Belgium’s UEFA Euro 2020 campaign. Witsel, on the other hand, will only start training just ahead of the Euros and will be touch and go for the Red Devils’ opener.

In addition, Eden Hazard is not fit enough to start against Croatia this weekend, although Roberto Martinez did sound hopeful during his pre-match press conference when pressed on the prospect of the 30-year-old making an appearance off the bench. Hazard should, therefore, make a cameo in the latter stages of the game to build up his sharpness.

In the Belgium captain’s stead, Leandro Trossard ought to get a chance to impress from the left wing, with Dries Mertens expected to be deployed on the right flank. As ever, Romelu Lukaku will lead the line for Belgium against Croatia, with the 28-year-old even donning the armband for the hosts in the absence of Hazard and De Bruyne.

Youri Tielemans will be back in the starting lineup, taking charge of providing the creative impetus in midfield. The 24-year-old’s playmaking abilities should provide the spark that was missing to a little extent last time out, with Leander Dendoncker making way in the middle of the park. Out wide, Timothy Castagne and Yannick Carrasco ought to be installed as the two wing-backs.

As for the defence, Martinez had already confirmed in his press conference ahead of the Greece tie that Thomas Vermaelen and Jan Vertonghen would feature in defence against Croatia, with the duo starting alongside Toby Alderweireld in the three-man central defensive unit. In goal, there is no looking past Thibaut Courtois. 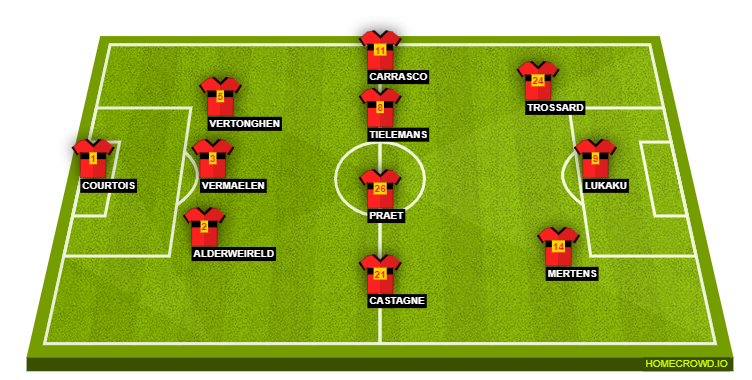 Zlatko Dalic does not have any key players missing from the squad that he has picked as Croatia make their preparations for UEFA Euro 2020. The only notable absentee is Marin Pongracic, who misses the ticket for the finals.

The game against Belgium, meanwhile, will give Dalic a chance to test some of the players who did not start last time out versus Armenia. Some of these players include Josip Juranovic, Dejan Lovren and Mario Pasalic.

Pasalic will play off of central striker Andrej Kramaric, who will spearhead the attack for Croatia against Belgium. Ivan Perisic and Josip Brekalo ought to be the two wide men once again, while Marcelo Brozovic will sit alongside captain Luka Modric in the midfield double pivot. Mateo Kovacic ought to make an appearance off the bench as he continues to assimilate with the squad.

At the back, Lovren ought to pair up with Domagoj Vida, with the two vice-captains forming the central defensive partnership. Juranovic will take up the right-back slot, with Borna Barisic starting on the left side of Croatia’s defence. Finally, Dominik Livakovic will take his place between the sticks against Belgium. 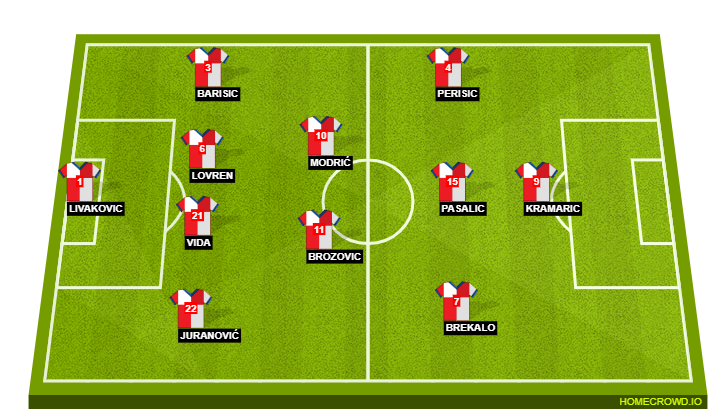 While many will wait with bated breath for the appearance of Eden Hazard in the final stages of the game, it will also be interesting to see how Luka Modric fares. The veteran midfielder has been showing signs of age catching up to him and as he comes off a taxing 2020/21 season with Real Madrid, energy management will be crucial.

The Croatia captain continues to be a standout performer for his national side and will likely be their talisman at UEFA Euro 2020 as well. A solid display against Belgium will go a long way in helping him not just get his sharpness in check but also possibly galvanize Croatia ahead of what could be a tricky group stage against England, Scotland and Czech Republic.

This ought to be a close one, as Belgium did look a bit off the pace against Greece. In Croatia, the Red Devils will have another tricky opponent, although the Vatreni have been quite suspect at the back in recent times. On top of that, Belgium are as formidable as they come in home conditions, all of which point towards a narrow win over Croatia on Sunday.