Spain and Portugal will aim to get into the groove ahead of UEFA Euro 2020 when they clash at the Wanda Metropolitano in Madrid on Friday.

We are just over a week away from the curtain raiser at the UEFA Euro 2020, and all the 24 teams participating in this summer’s European extravaganza are making their final preparations for the tournament. The marquee friendly this week will pit Iberian neighbours Spain and Portugal against each other at the Wanda Metropolitano on Friday.

Spain have done fairly well since their ouster in the Round of 16 at the 2018 FIFA World Cup. La Roja have only been defeated thrice in the last three years, with the team making some decent progress under Luis Enrique – and briefly under Roberto Moreno as well. However, there have been a few forgettable results since the resumption of international football, with Spain failing to beat Switzerland, Greece and Ukraine.

Portugal, on the other hand, are a part of the group of death at UEFA Euro 2020 and will need to be at their very best to ensure a successful defence of their crown. The Seleccao’s form since the resumption of international football has been typically solid, even though they have not been scoring bagful of goals, with just one defeat in 11.

Spain and Portugal last locked horns in Lisbon last year in a friendly, which ended in a goalless draw, and ahead of the latest meeting between the two sides, The Hard Tackle takes a closer look at the encounter.

The big shocker for Spain heading into the UEFA Euro 2020 is the omission of captain Sergio Ramos from the final squad. The veteran defender, who has struggled with injuries for the better part of the calendar year, has failed to prove his fitness and will, therefore, not be a part of Luis Enrique’s squad.

The other notable absentees for Spain, meanwhile, are Marco Asensio, Sergi Roberto and Iago Aspas, while Ansu Fati is recovering from a long-term knee injury. As for the surprise selections, Adama Traore has been recalled to the squad and will provide the X-factor, while Aymeric Laporte has been called up straightaway after changing allegiances from France to Spain.

Laporte ought to make his debut against Portugal, with Diego Llorente likely to be his partner at the heart of Spain’s defence. Out wide, Jordi Alba and Marcos Llorente should be the two full-backs for the hosts, with Cesar Azpilicueta only recently joining up with the squad after being a part of the triumphant Chelsea side in the UEFA Champions League final.

Up ahead in midfield, Sergio Busquets and Koke will provide the leadership in the team in the absence of Ramos, with the duo expected to feature regularly over the course of the coming month. The third man in midfield is likely to be Pedri, who will get a chance to impress ahead of Thiago Alcantara and Fabian Ruiz.

Finally, in attack, all three spots could be up for grabs heading into UEFA Euro 2020. As for the game against Portugal, Gerard Moreno could lead the line for Spain, with Ferran Torres and Mikel Oyarzabal starting alongside him in the final third. Alvaro Morata, Dani Olmo, Adama Traore and Pablo Sarabia will, therefore, be the backup options. 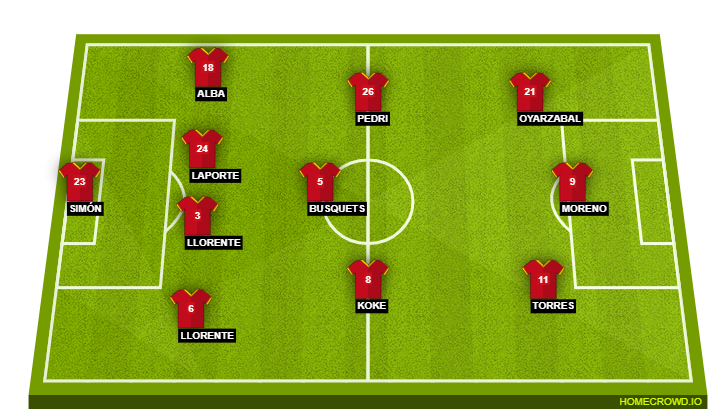 Unlike his counterpart in the Spain dugout, Fernando Santos has hardly sprung a surprise with his decisions on the squad selection front. The only major absentee for Portugal is Pedro Neto, who is recovering from an injury, while Nuno Mendes has been favoured ahead of Mario Rui at left-back.

Mendes, though, will only be a backup option for Raphael Guerreiro, but is likely to feature from the off against Spain, in what will be a chance to impress. On the right flank, Nelson Semedo is a certainty, with the Manchester City contingent unlikely to start. As a result, the likes of Ruben Dias, Joao Cancelo and Bernardo Silva will only be on the bench on Friday.

Therefore, at the heart of Portugal’s defence, Pepe and the in-form Jose Fonte ought to pair up, with Anthony Lopes likely to get the nod between the sticks for the visitors. Up ahead in midfield, the absence of Bernardo Silva – and possibly Bruno Fernandes – means Sergio Oliveira gets an opportunity to make his mark for Portugal.

Finally, in attack, the key decision will centre around the involvement of Andre Silva. Judging by his form this term, coupled with the inconsistencies plaguing Joao Felix, 25-year-old striker should be spearheading the Portugal attack, with Diogo Jota and captain Cristiano Ronaldo partnering up in the final third. 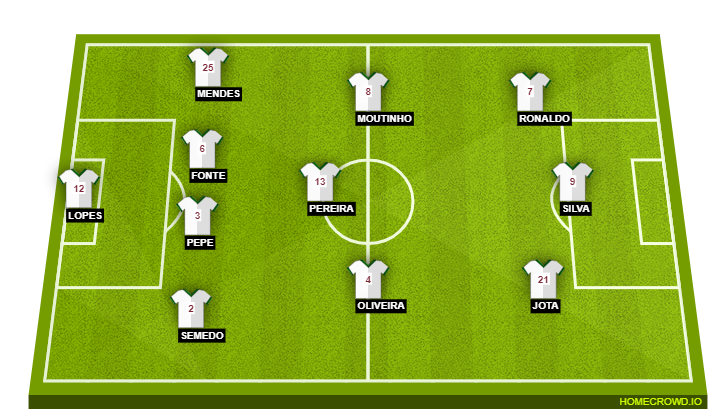 While Cristoano Ronaldo will be the main attraction in this match, there are a few others who will have the chance to make an impression on their respective managers. One such player is Manchester City’s Spanish forward Ferran Torres.

The young winger is coming off the back of a solid 2020/21 campaign wherein he played a key role in the late push to clinch the Premier League title. Now, the focus turns towards UEFA Euro 2020, with Torres one of those desperately vying for place in the attacking unit. Will he make a splash on Friday?

Spain and Portugal are usually extremely difficult to separate whenever they clash with each other. Friday should be no different as both Luis Enrique and Fernando Santos work towards finalising their preferred eleven for UEFA Euro 2020. The Hard Tackle predicts a keenly contested affair that should end in a 1-1 draw.