France will begin their preparations for UEFA Euro 2020 when they welcome Wales to the Allianz Riviera in Nice on Wednesday.

The UEFA Euro 2020 is nearly here. But before then, the participants will get warmed up with a couple of friendlies each. Defending world champions France will be in action on Wednesday night, when they play hosts to Wales at the Allianz Riviera in Nice.

France have been in a solid run of form since the resumption of international football last year in September. In fact, Les Bleus have lost just one of the 11 games that they have played in this period, which was a friendly against Finland, meaning they are unbeaten in 17 competitive outings, which bodes well for Didier Deschamps & co. heading into UEFA Euro 2020.

Wales, on the other hand, are also set to be a part of the European Championships this summer. However, unlike France, the Dragons have had a lot of uncertainty and instability surrounding them due to the fact that manager Ryan Giggs is facing a trial over allegations of assault. Under the tutelage of Robert Page, though, Wales have still done fairly well, winning four of the six games.

France ran out 2-0 winners the last time they locked horns with Wales, with Antoine Griezmann and Olivier Giroud on target for Les Bleus. Ahead of the latest meeting between the two sides, The Hard Tackle takes a closer look at the encounter.

Didier Deschamps has not made many major alterations to the squad he picked in the previous international break in March, with Ferland Mendy the only major absentee from that group. In addition, Houssem Aouar, Eduardo Camavinga and Nabil Fekir are among the notable omissions, with Aouar and Camavinga being picked for France’s Under-21 side.

The big news, though, is the return of Karim Benzema, who is back in the France squad for the first time in five years, in a decision that has divided opinions but ought to improve Les Bleus, as far as the performance levels are concerned. Benzema ought to get a chance to make an impression right away, and he will lead the line for France against Wales.

Much of the rest of the starting lineup, though, should feature players that are unlikely to start on a regular basis at the Euros. Having said that, Antoine Griezmann is expected to feature and will play off of Benzema, as the duo look to strike up a chemistry ahead of the big competition.

However, the likes of Kylian Mbappe, Paul Pogba and Raphael Varane are among those who ought to be held back as they look to retain their fitness levels after a season that saw them all being hampered by a few injuries. In Mbappe’s stead, Ousmane Dembele will get a chance to impress while Thomas Lemar is expected to be the first-choice on the left wing.

As for the midfield, Moussa Sissoko and Adrien Rabiot will likely form a more defensive-minded double pivot, with N’Golo Kante being rested after being involved in the UEFA Champion League final this past weekend. As for defence, Leo Dubois, Jules Kounde, Clement Lenglet and Lucas Digne should all feature, with Mike Maignan taking his place in goal for France. 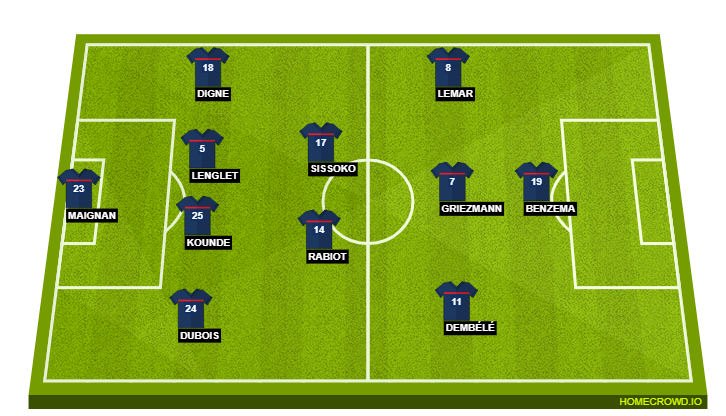 Like his counterpart in the France dugout, Robert Page has not chopped and changed a lot. Instead, the Wales caretaker boss has chosen to keep faith in his regulars. Aaron Ramsey, who missed out in March due to injury, returns to the roster.

Page, though, has been forced into one change to his squad, with James Lawrence pulling out with an unspecified injury. In his stead, Wales have drafted in Tom Lockyer, who takes his place in the defensive unit. As for the notable absentees, Tom Lawrence, Rabbi Matondo and Hal Robson-Kanu are among those missing out.

James Lawrence has been forced to withdraw from the squad due to injury and has been replaced by Tom Lockyer.

Meanwhile, Lockyer ought to be named in the starting lineup straightaway, taking his place in the three-man central defensive unit, with Wales set to line up in a 3-4-3 formation. The 26-year-old should have Joe Rodon and Chris Mepham for company at the back, with Danny Ward likely to be stationed between the sticks.

Up ahead in midfield, the onus will be on Ramsey to provide the creative impetus, while Joe Morrell will aim to hold the fort and keep a check on Antoine Griezmann. Chris Gunter and Neco Williams will likely be the two wing-backs, with Ben Davies being preserved for the Euros.

The key man for Wales will invariably be Gareth Bale, who will look to continue the fine run of form with which he ended the season for Tottenham Hotspur. The Wales captain will be direct in his approach play from the right flank, with Daniel James starting on the left wing, while Kieffer Moore will likely lead the line for Wales against France. 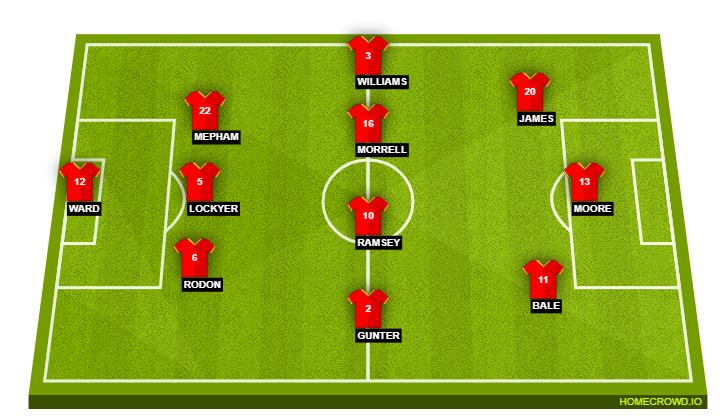 The major talking point pertaining to squads picked for the UEFA Euro 2020 has inevitably been the selection of Karim Benzema. Exiled for the better part of the past half-a-decade, the veteran striker is finally back in the France group and is now set to be a key player for Les Bleus this summer.

While debates over the moral implications of the selection are likely to linger for some time, there is no denying the fact that Benzema should improve the France squad significantly. After all, he has been one of the best players in Europe for the last three years and adds goals that none of the other strikers can provide consistently.

Now, is the time for him to gel in with the rest of his teammates, making the two friendlies key contests for him. Can Benzema get settled in properly before possibly leading the line for France with aplomb? Only time will tell that.

We are going with a 1-0 France win here, but the match will be anything but close. While Gareth Bale will pose a threat to a relatively young defensive line, the returning Karim Benzema will be the game changer here, along with Antoine Griezmann, who ought to revel in a central role as he so often does for France. Wales, though, do not concede many, which is why we predict a 1-0 win for the hosts.