The Coupe UEFA will be up for grabs when Villarreal and Manchester United meet in the UEFA Europa League final in Gdansk on Wednesday.

The 2020/21 season is reaching its end, with the focus set to switch to the UEFA Euro 2020 soon. Before that, though, there is some serious business to be conducted and this midweek, Villarreal and Manchester United will lock horns in the UEFA Europa League final in Gdansk, with both sides looking for their first trophy of the season.

Villarreal have been a part of the UEFA Europa League since the group stages, topping Group I to seal a berth in the Round of 32. In the knockout stages, the Yellow Submarine eased past Red Bull Salzburg, Dynamo Kyiv and Dinamo Zagreb in the first three rounds before grabbing a hard-fought 2-1 aggregate win over Arsenal in the semi-finals to set up the finale date with Manchester United.

Speaking of, the Red Devils dropped down to the Europa League after finishing third in the UEFA Champions League Group H, losing three of their final four games. Manchester United, though, have been imperious in the second-tier competition, beating Real Sociedad, AC Milan, Granada and AS Roma to reach the final.

As for recent form, both sides head into the final with a similar run, having won just two of their last five matches, although Manchester United could afford to take a step back in the Premier League after having already secured a second-placed finish. Villarreal, though, ended up missing out on a top six spot after going down 2-1 to Real Madrid this past weekend.

Villarreal and Manchester United have clashed four times previously, with each of the fixtures incredibly ending in a goalless draw. Ahead of the latest meeting between the two sides, The Hard Tackle takes a closer look at the encounter.

For what is a very, very, very special trip. 🤩 #UELFinal#ItsOurTime pic.twitter.com/R9E3MGvPPL

Unai Emery does not have many pressing injury concerns hampering his preparations ahead of the UEFA Europa League final against Manchester United. In Gdansk on Wednesday, the Villarreal boss is only likely to be bereft of the services of one first-team player.

Juan Foyth is facing a race against time to be declared fit to take on Manchester United, but could miss out, with captain Mario Gaspar starting in his stead as the right-back. However, it looks like Samu Chukwueze, who has been linked with Manchester United lately, is set to be fit enough to make the matchday squad.

Chukwueze, with his burst of pace and creative nous, will be the X-Factor for Villarreal and will look to put pressure on Luke Shaw. On the left flank, Manu Trigueros is a certainty, with Dani Parejo being the key man in midfield for the Spanish outfit due to his tenacity and big game acumen.

Parejo ought to have Etienne Capoue as his partner in the middle of the park, with the Frenchman set to start after missing the semi-final second leg against Arsenal due to suspension. Meanwhile, there are two key decisions that Emery has to make on either end of the pitch.

Firstly, the Villarreal boss has to decide between Paco Alcacer and Carlos Bacca as to who partners top scorer Gerard Moreno upfront, with the former likely to get the nod. The other big decision will be the choice of goalkeeper, with first-choice shot stopper Sergio Asenjo likely to pip Geronimo Rulli between the sticks.

Finally, in defence, the key man will be Pau Torres, who is another target for Manchester United, with the Spanish international being tasked with the responsibility of keeping a check on Edinson Cavani. Torres will have Raul Albiol for company at the heart of the Villarreal backline, with Alfonso Pedraza the left-back. 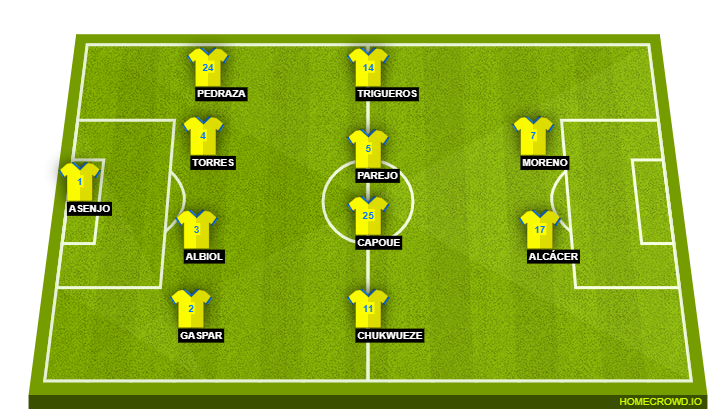 Like his counterpart in the Villarreal dugout, Ole Gunnar Solskjaer has been sweating over the fitness of a key player ahead of the trip to Gdansk. On Wednesday, the Manchester United manager will have to make do without as many as three first-team players.

Anthony Martial and Phil Jones continue to recover from their respective fitness issues and are not a part of the travelling squad. One player who did make the cut is captain Harry Maguire, who has been missing in action since sustaining an ankle injury earlier this week against Aston Villa.

However, Maguire missed the training session on Tuesday and is set to watch on from the sidelines when Manchester United take the field against Villarreal, with Bruno Fernandes expected to don the captain’s armband in his stead.

Maguire just heading down the tunnel. What a shame. pic.twitter.com/6uqcY7eqlF

Fernandes will be the creator-in-chief for Manchester United, pulling the strings higher up the pitch along with Paul Pogba, who has produced some clutch contributions this term. Pogba, though, could drop into the midfield, where he will likely pair up with Scott McTominay in the double pivot.

Pogba’s role as a deeper lying midfielder essentially means that both Mason Greenwood and Edinson Cavani will start. Cavani’s place in the side was pretty much certain after he was involved in seven of the eight goals that Manchester United scored over two legs against AS Roma. Versus Villarreal, Cavani will lead the line for Manchester United, with Greenwood and Marcus Rashford being the two wide men.

At the back, Eric Bailly will be the only player retaining his spot from the 2-1 win over Wolves this past weekend, with Victor Lindelof his partner at the heart of the Manchester United defence.

Out wide, Aaron Wan-Bissaka and Luke Shaw are certainties while in goal, Solskjaer has a big decision to make. Dean Henderson and David de Gea are battling to feature as the last man to thwart the Villarreal attackers. 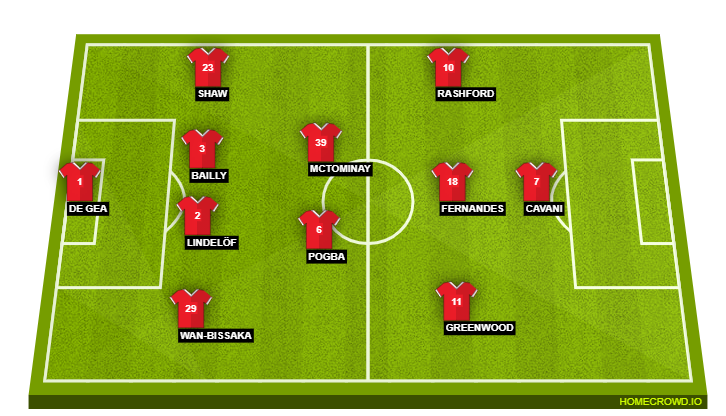 There will be quite a few top-notch players on show in the UEFA Europa League final. From Bruno Fernandes to Paul Pogba and Mason Greenwood at Manchester United, to Samu Chukwueze and Pau Torres in the Villarreal camp. However, it is Edinson Cavani who takes the cake in this section.

The veteran Uruguayan striker has come into his own since arriving at Old Trafford on a Bosman move last summer, chipping in with some key contributions. His most crucial contribution came in the semi-finals against AS Roma, having been directly involved in seven of the right goals scored by Manchester United over two legs.

And, Cavani will need to be at his very best once again if Manchester United are to get the better of a Villarreal side that might not give an inch all that much. With the 2020/21 season reaching its end and with Manchester United actively pursuing Harry Kane, Cavani will also hope to show that he has a whole lot to offer right now.

This fixture has historically solely produced goalless draws. However, with an elusive trophy up for grabs, expect both sides to go for it after making a tentative start to the game. The absence of Harry Maguire will be telling for Manchester United, meaning Gerard Moreno, Carlos Bacca and Paco Alcacer will be in business all game long.

However, the Red Devils could partly defend by keeping hold of the ball for stretched periods, with Edinson Cavani and Mason Greenwood likely to come good in the final third. With that in mind, The Hard Tackle predicts a big win for Manchester United, with Ole Gunnar Solskjaer & co. prevailing 3-1 in Gdansk to end the 2020/21 season on a high.