Chelsea will be hoping to consolidate their place on the table and seal a top four finish when they take on Aston Villa at Villa Park on Sunday.

After nearly eight months of gruelling action, in what has been the most intense Premier League season, the 2020/21 campaign comes to an end with Gameweek 38. The final two qualifiers for the UEFA Champions League are yet to be identified and Chelsea will hope to be one of the two teams to clinch the remaining spots in the top four, when they lock horns with Aston Villa at Villa Park.

Aston Villa do not have anything let to play for this season, as they are certain to finish 11th. As far as their performance over the course of the season is concerned, the Villans have been a marked improvement on the team that nearly got relegated last season. This time around, Dean Smith & co. have been fairly solid while constantly improving their output in the final third as well, which does reflect in their final position.

Chelsea, on the other hand, have endured a roller-coaster of a Premier League campaign, having gone from being table-toppers and possible title contenders to fighting for a place in the top four. The Blues, though, have been one of the most solid sides under the tutelage of Thomas Tuchel and have well and truly earned a top four finish, although they still need a win to guarantee the same.

The reverse fixture, played at Stamford Bridge back in December, saw Aston Villa come back from a goal down to hold Chelsea to a 1-1 draw. Ahead of the latest meeting between the two sides, The Hard Tackle takes a closer look at the encounter.

"Their families won't have seen them play at Villa Park before, so there will certainly be a motivation for all my players." 💯 #AVLCHE

Dean Smith has one fresh roster issue to contend with ahead of the visit of Chelsea. On Sunday, the Aston Villa manager will have to make do without as many as four first-team players, with Ross Barkley the latest absentee, as he is ineligible to face parent club Chelsea due to the terms of his loan deal with the Villans.

The major absentee for the hosts, though, is Matty Cash, who is recovering from a hamstring injury that has cut his season short. Also missing for Aston Villa are Morgan Sanson and Trezeguet, both of whom are currently recovering from their respective knee issues.

The absence of Cash means Smith can either name Ahmed Elmohamady as the right-back or continue with the makeshift option in Ezri Konsa. Konsa should indeed continue on the right flank, with Kortney Hause and Tyrone Mings pairing up at the heart of the Aston Villa defence, while Matt Targett is a certainty at left-back. In goal, there is no looking past Emiliano Martinez.

Up ahead in midfield, Douglas Luiz and John McGinn, who have come in for praise from Smith, will continue in their dynamic midfield tandem. The duo will not only look to stifle Mason Mount when Chelsea push forward with their moves but also provide the swift ball progression during transitions.

The key man in attack for Aston Villa will invariably be captain Jack Grealish, who will provide the creative impetus higher up the pitch, while Anwar El Ghazi and Bertrand Traore will be more direct in their approach play. Finally, Ollie Watkins will lead the line for the hosts against Chelsea, with the Englishman being a poacher in the box. 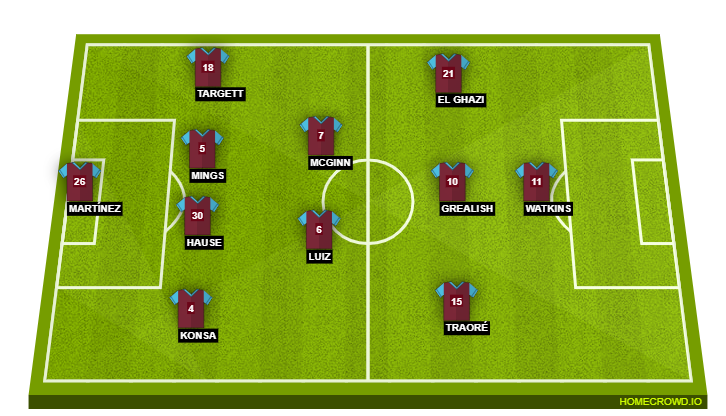 Unlike his counterpart in the Aston Villa dugout, Thomas Tuchel has been handed quite a boost ahead of the trip to Villa Park. On Sunday, the Chelsea boss could well have a full strength squad at his disposal, with three erstwhile absentees being in contention to feature.

Andreas Christensen is definitely available after recovering from a hamstring injury that he had picked up against Manchester City earlier this month. Tuchel also added during his pre-match press conference that N’Golo Kante and Kai Havertz could be up for selection on Sunday, although the duo could well be preserved for the UEFA Champions League final next week.

Kante’s absence from the starting lineup would mean that Mateo Kovacic will be making a crucial appearance in the midfield double pivot, where he ought to have Jorginho for company. Another key decision should see Reece James and Chelsea captain Cesar Azpilicueta swap places.

James played as part of the three-man central defensive unit in the last two games to deal with the pace of Jamie Vardy and managed to impress as well. However, against Aston Villa, James will be back in his more natural haven at right wing-back, and he will look to whip in some dangerous deliveries from his flank. On the left wing, there is no looking past Ben Chilwell.

Azpilicueta, meanwhile, will be a part of the back-three that will also feature Thiago Silva and Antonio Rudiger, meaning Christensen will also be preserved for the Champions League final while Edouard Mendy will feature between the sticks for Chelsea.

Finally, in attack, the potential absence of Havertz means Timo Werner will spearhead the Chelsea unit in the final third, with Mason Mount and Christian Pulisic likely to get the nod as the two attacking midfielders in behind the Germany forward. 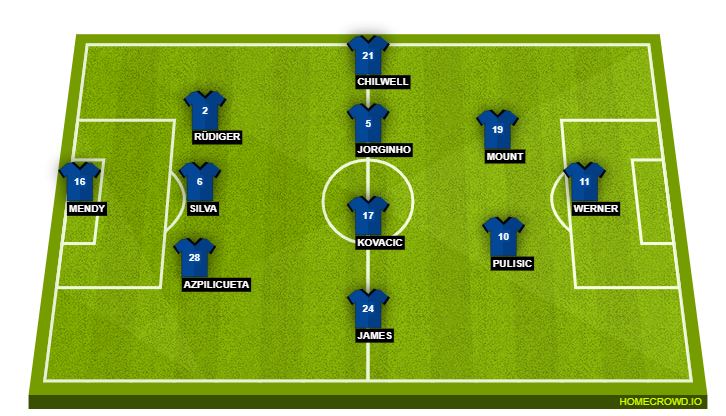 In a squad that is as filled to the brim as Chelsea’s is, the competition for places is naturally quite fierce. That especially holds true for the attacking department, with Christian Pulisic, Timo Werner, Hakim Ziyech, Callum Hudson-Odoi and Kai Havertz practically competing for two spots.

With the UEFA Champions League final against Manchester City on the horizon, it is important that any of these players who get a chance make it a point to make an impression. That is where Pulisic comes in, with the American being in the most privileged position to do so. If he can inspire Chelsea to a crucial win, the second spot behind the central striker could well be his. A big game, therefore, for Pulisic.

This is a potential banana skin game for Chelsea, who face an Aston Villa side that has troubled most big teams this season. With Jack Grealish getting back to his best, the Chelsea defence could be put to the sword as well, while Ollie Watkins could be in business as well in the Blues’ box.

On the opposite end, Mason Mount can be expected to make a splash once again, but Christian Pulisic could end up squandering his chance. In the end, there might not be too much to separate the two sides, with Emiliano Martinez producing an inspired showing in goal. With that in mind, The Hard Tackle predicts a 1-1 draw, meaning Chelsea will then be hoping for Tottenham to beat Leicester City.