A spot in the Championship playoff final will be up for grabs when Swansea City welcome Barnsley to the Liberty Stadium on Saturday.

The 2020/21 season is nearing its end and with it, we are set to learn the third team to be promoted to the Premier League in a week’s time. But first, there is an urgent matter of completing the Championship playoff semi-finals. Brentford will take on Bournemouth in the first fixture, with the day’s action set to be rounded off at the Liberty Stadium, where Swansea City face Barnsley.

Swansea City have made constant improvements since a sub-part 2018/19 campaign that saw them finish 10th. The Swans reached the Championship playoff final last season and are in line to do at least a repeat of that this term. Steve Cooper & co. boasted a strong record at home in the league campaign, raking in 47 points from 23 outings at home.

Barnsley, on the other hand, reached the Championship playoff semi-finals by finishing 5th in the league. After finishing 21st in the table last season, the Tykes have made fabulous progress this term, but come into this game on the back of a three-game winless run.

The first leg, played at the Oakwell Stadium earlier this week, saw Swansea City eke out a narrow 1-0 win over Barnsley, thanks to Andre Ayew. Ahead of the latest meeting between the two sides, The Hard Tackle takes a closer look at the encounter.

All focus on tomorrow 🔋

Steve Cooper does not have any fresh injury concerns hampering his preparations ahead of the visit of Barnsley. On Saturday, the Swansea City manager will only be bereft of the services of three first-team players, with Steven Benda (ankle), Tivonge Rushesha (ACL) and Jordan Morris (ACL) being the ones on the sidelines.

Freddie Woodman, currently on loan from Newcastle United, will be the man in goal for Swansea City, who will line up in a 4-3-3 formation against Barnsley. Ben Cabango and Marc Guehi will pair up at the heart of the Swansea defence, with Kyle Naughton and Jake Bidwell being the two full-backs.

Up ahead in midfield, the onus will be on Matt Grimes to keep things tight in the middle of the park, with Jay Fulton and Conor Hourihane providing defensive support to the Swansea captain. The duo will also be key in providing the forward thrust during the transitions.

Andre Ayew will be the key man in attack for Swansea, bringing the powerhouse factor in the final third. Ayew will start on the right wing for the hosts, with Jamal Lowe a certainty on the left flank. Finally, Liam Cullen will lead the line for the Swans against Barnsley. 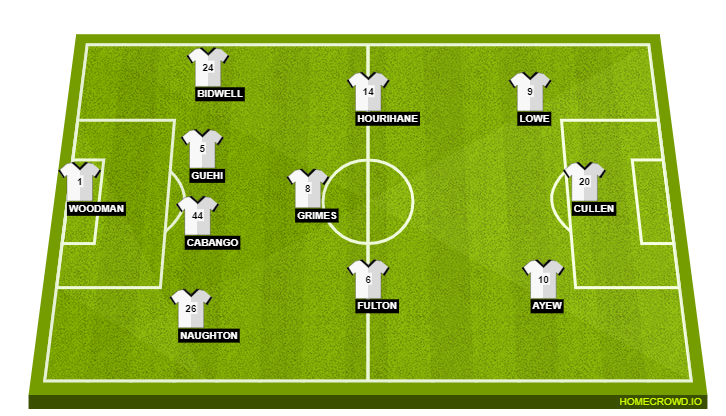 Like his counterpart in the Swansea City dugout, Valerian Ismael barely has any pressing issues to deal with ahead of the trip to the Liberty Stadium. On Saturday, the Barnsley manager will only have to make do without Ben Williams, who is recovering from a long-term knee injury.

Brad Collins is the automatic pick between the sticks for Barnsley, who will be set up in a 3-4-3 formation against Swansea on Saturday. Toby Sibbick has been remodeled as an auxiliary centre-back and will be stationed on the right side of the three-man central defensive unit, which will also comprise of Michal Helik and Mads Andersen.

Up ahead in midfield, captain Alex Mowatt will aim to keep a lid on the output of Conor Hourihane while partner Romal Palmer will also look to shore up the defensive side of things. Callum Brittain and Callum Styles will be the two wing-backs, who will be tasked with providing the width in the final third, while also dropping deep to create a back five during the defensive phases.

Finally, in attack, Daryl Dike, who has been linked with some of the biggest Premier League clubs, will lead the line for Barnsley against Swansea. The 20-year-old will receive support from Carlton Morris and Cauley Woodrow in the final third, with the trio largely remaining central to heap the pressure on the Swansea centre-backs. 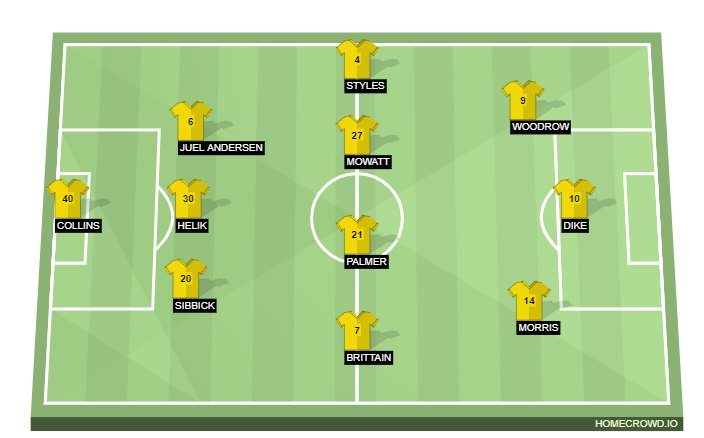 Daryl Dike was an apt candidate for this section, but Andre Ayew is our pick following yet another impressive showing for Swansea City. The challenge now is to reproduce the goods in the final third and inspire the Swans to the Championship playoff final.

With some of his fellow attackers not quite up to scratch at times, it will once again be up to the 31-year-old to be at his very best in the Barnsley box. Pining for a return to the Premier League, Ayew seems to have the right kind of motivation to make his mark on the game. Will he be at his very best on the day?

This one is quite close to call. Swansea City might have edged Barnsley in the first week, but they were thoroughly outplayed at times. Having said that, the Tykes seem to have some sort of a mental block against their hosts and that should once again prove to be the case at the Liberty Stadium, although this time around, a 1-1 draw appears to be on the cards.