A place in the Championship playoff final will be on the line when Brentford welcome Bournemouth to the Brentford Community Stadium on Saturday.

The 2020/21 season reaches its end soon and with it, the promotion and relegation picture is set to become crystal clear over the coming week or so. In England, the Championship playoff semi-finals will be completed this Saturday and the first one will witness Brentford play hosts to Bournemouth at the Brentford Community Stadium, with very little separating the two sides.

Brentford had been in fine form heading into the Championship playoffs, having ended the league campaign on a 12-game unbeaten run. That, coupled with an eye-catching style of play meant the Bees were the favourites to secure the third promotion spot ahead of their clash with Bournemouth.

Speaking of, the Cherries seemed to be set to achieve automatic promotion back to the Premier League just a season after being relegated. However, Jonathan Woodgate & co. have stumbled in the second half of the season before the league campaign on a run of three defeats in a row. But, with Reading a fair bit behind them, Bournemouth were safely in sixth spot to seal a playoff slot.

The first leg, played at Dean Court earlier this week, saw Bournemouth eke out a narrow 1-0 win over Brentford, with Arnaut Danjuma Groeneveld scoring the winner. Ahead of the latest meeting between the two sides, The Hard Tackle takes a closer look at the encounter.

Thomas Frank does not have many pressing concerns hampering his preparations ahead of the visit of Bournemouth. On Saturday, the Brentford manager will only be bereft of the services of two first-team players, with the major absentee being Josh Dasilva (hip), while Sandon Baptiste (knee) misses out as well.

The good news from the last game, though, has been the return of Henrik Dalsgaard and Rico Henry, who were both back on Monday against Bournemouth. David Raya will take his rightful place in goal for Brentford, who will line up in a slightly altered 3-4-2-1 formation on Saturday.

The key tactical battle will be between the three centre-backs and the Bournemouth forwards, with David Brooks and Arnaut Danjuma Groeneveld being the danger men for the visitors. Therefore, the onus will be on captain Pontus Jansson to keep the defensive unit organised and disciplined, with Christian Norgaard and Ethan Pinnock being his partners at the back.

Up ahead in midfield, Vitaly Janelt and Mathias Jensen will hold the fort for Brentford, allowing the attacking trio more freedom to express themselves as a result. Mads Rasmussen should hold on to his spot as the right wing-back, with Bryan Mbuemo likely to come in on the left flank, acting primarily as a winger.

The creative impetus, though, will rest on the shoulders of Tariqe Fosu-Henry, who will receive ample support from Sergi Canos, while Championship Golden Boot winner Ivan Toney will lead the line for Brentford against Bournemouth. 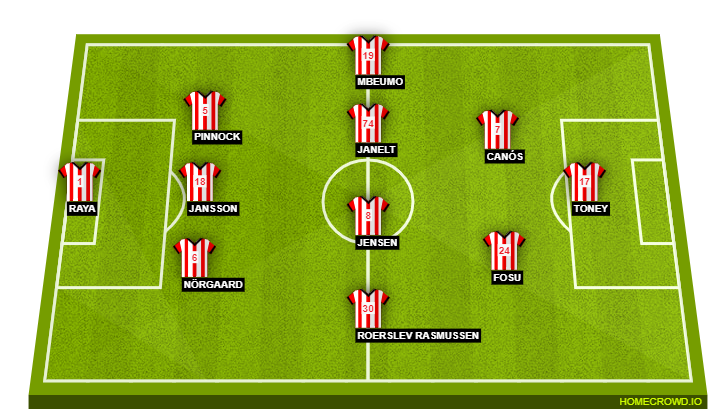 Unlike his counterpart in the Brentford dugout, Jonathan Woodgate has a couple of fresh fitness issues to deal with ahead of the trip to the Brentford Community Stadium. While Lewis Cook (knee) and Junior Stanislas (hamstring) remain on the sidelines, the Bournemouth manager is also sweating over the fitness of two key players.

Captain Steve Cook sustained a minor knee injury while Ben Pearson also picked up a knock, with both players categorised as “50-50” by Woodgate during his pre-match press conference. With that in mind, it could be likely that both players miss out against Brentford.

Taking Cook’s place at the heart of the Bournemouth defence will likely be Chris Mepham, with Cameron Carter-Vickers being his partner at the back. Adam Smith and Martin Kelly ought to be the two full-backs, with Asmir Begovic, the Player of the Year for Bournemouth, an automatic pick in goal.

Up ahead in midfield, if Pearson is unable to prove his fitness, Jack Wilshere will be the man to start in the double pivot alongside Jefferson Lerma. While Lerma will shore up the defensive side of things and provide cover to the backline, Wilshere will provide the forward impetus with his ball progression.

Philip Billing will be the third man in midfield, with Bournemouth taking the shape of a 4-3-3 in the defensive phases, which will see the 24-year-old drop deep but charge forward during transition periods. As iterated, David Brooks and Arnaut Danjuma Groeneveld will hold the key in the final third for Bournemouth, whose attack will be spearheaded by Dominic Solanke against Brentford. 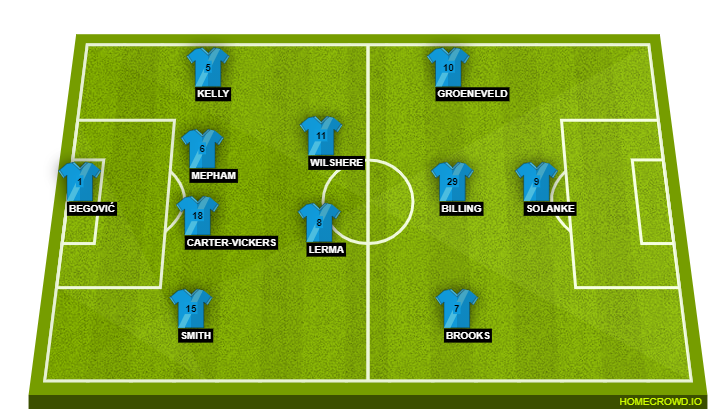 There are several candidates to feature in this section, with David Brooks, Chris Mepham, Arnaut Danjuma Groeneveld and Asmir Begovic being key players for Bournemouth, while Pontus Jansson and Bryan Mbuemo are ones to look out for at Brentford. However, Ivan Toney takes the cake this time around, considering the importance of goals on Saturday.

Toney ended up winning the Championship Golden Boot this season and there are big things ahead for the 25-year-old. After, Arsenal have been linked with the Brentford striker, who has been in a league of his own at times. However, can he deliver the goods when it matters the most? A big game beckons Toney and Brentford.

Brentford have not exactly been prolific as a unit in recent times, having more than goal per game at home since February. That bodes well for Bournemouth, who will need to be at their resolute best at the back on Saturday if they are to seal their place in the Championship playoff final.

While Ivan Toney should possibly be on target for the hosts, the rest of his teammates might end up being underwhelming again, while David Brooks could be the man to make the difference for the visitors. With that in mind, The Hard Tackle predicts a 1-1 draw that helps Bournemouth progress to the final hurdle in order to seal a return to the Premier League.