Everton will be desperate to keep their fading UEFA Europa League hopes alive when they welcome Wolves to Goodison Park on Wednesday.

The 2020/21 Premier League season is in its final stretch, with Gameweek 37 underway currently. Six matches will be on show on Wednesday, with the action kicking off at Goodison Park, where Everton will play hosts to Wolverhampton Wanderers, eager to keep their fading hopes of making it to the UEFA Europa League alive.

Everton have embarked on an upward trajectory under the tutelage of Carlo Ancelotti and have produced some impressive displays this season. However, ever so often the Toffees have been susceptible to the odd morbid showing, as was evident this past weekend against Sheffield United, who handed the Toffees a shock 1-0 defeat.

Wolverhampton Wanderers, on the other hand, have endured a 2020/21 campaign to forget for the most part. Crippled by crucial roster issues at various stages of the season, Wolves are set to finish outside the top half for the first time since returning to the Premier League and do not have much to play for following their 2-0 loss to Tottenham Hotspur on the weekend.

The reverse fixture, played at the Molineux back in January, saw Everton eke out a narrow 2-1 win over Wolves, with Michael Keane scoring the winner. Ahead of the latest meeting between the two sides, The Hard Tackle takes a closer look at the encounter.

🔙 | “We have Yerry Mina and Joshua King back.”@MrAncelotti provides the latest team news ahead of #EVEWOL… pic.twitter.com/qJdU6yyANs

Carlo Ancelotti has been handed a double boost on the team news front ahead of the visit of Wolverhampton Wanderers. On Tuesday, the Everton manager will only be bereft of the services of one first-team player, with Jean-Philippe Gbamin the only absentee, due to a knee injury.

The good news, meanwhile, comes in the form of the availability of Yerry Mina and Joshua King. While neither player is expected to start, their return bodes well for Ancelotti and his selection choices at this juncture of the season.

Jordan Pickford picks himself in goal for Everton, who will be set up in a 4-2-3-1 formation against Wolves. At the heart of the Everton defence, Michael Keane and Ben Godfrey ought to pair up, with Lucas Digne and captain Seamus Coleman starting as the two full-backs.

Up ahead in midfield, Abdoulaye Doucoure and Allan will form a solid double pivot that will aim to keep a lid on the output of their Wolves counterpart. The creative onus, meanwhile, will rest on the shoulders of James Rodriguez and Gylfi Sigurdsson, with Richarlison and Dominic Calvert-Lewin taking up the scoring positions for the most part in and around the Wolves box. 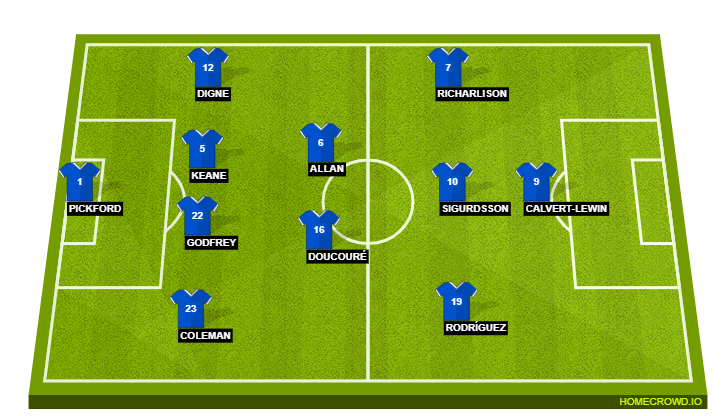 Unlike his counterpart in the Everton dugout, Nuno Espirito Santo has a number of pressing issues to deal with ahead of the trip to Goodison Park. On Wednesday, the Wolverhampton Wanderers boss will have to make do without as many as five first-team players due to various injuries.

As confirmed by Nuno, Raul Jimenez might still not be ready to feature even though he has started training with the squad. The rest of the absentees are Jonny (knee), Owen Otasowie (knock), Pedro Neto (knee) and Daniel Podence (groin), with none of the players expected to return ahead of the end of the season.

Rui Patricio is expected to take his place between the sticks, with Wolves lining up in a 4-2-3-1 formation that will mirror the Everton setup to a great extent. At the heart of the Wolves defence, there is no looking past Romain Saiss and captain Conor Coady, with Nelson Semedo and Rayan Ait-Nouri being the two full-backs.

Up ahead in midfield, Leander Dendoncker could start alongside Ruben Neves, with Joao Moutinho possibly making way. The onus of providing the forward thrust, though, will fall on Adama Traore, with Vitinha and Morgan Gibbs-White being the other two forwards part of the support cast for Fabio Silva, who will lead the line for Wolves against Everton. 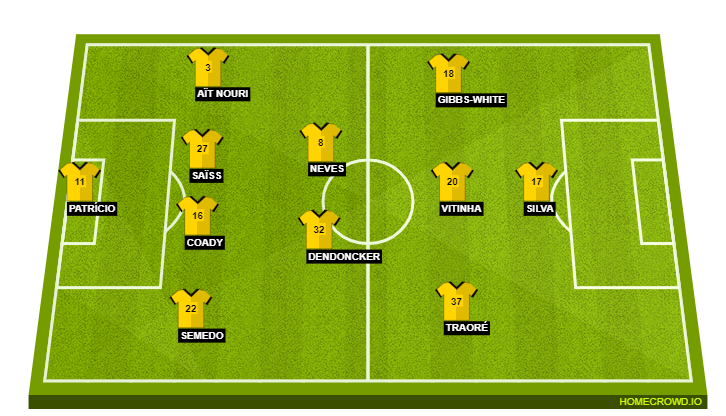 After a brilliant start to the season, Calvert-Lewin has gone off the boil in the last few months, with goals coming few and far between for him. However, the English striker has no room left to slip up as the time nears for the England squad to be announced for the European Championship.

With competition for places being fierce, Calvert-Lewin has to do whatever he can to make a late impression on Gareth Southgate and seal his ticket for the finals. If he does manage to deliver the goods, chances are he will have inspired Everton to a crucial win that helps them achieve their European aspirations as well. A big game, then, for the star striker.

This is one of those games that does not have a lot of goals in it. While Wolves tend to frustrate their opponents with some stubborn defending, Everton have improved at the back as well. On top of that, neither side is particularly impressive going forward, meaning chances will come at a premium. However, Everton might just nick this one by a slender margin and The Hard Tackle predicts a 1-0 win for the hosts.