Manchester United will be aiming to get back to winning ways when they welcome Fulham to Old Trafford on Tuesday.

Just two more rounds of fixtures remain for the 2020/21 Premier League season to come to an end. The penultimate matchday begins this midweek, with the action starting at Old Trafford, where Manchester United will play hosts to Fulham, in a game that will witness the return of fans to the stadium.

Manchester United have taken positive steps towards establishing themselves as proper contenders for the Premier League title. They might be falling well short of neighbours and newly-crowned champions Manchester City, but the signs of improvement are clear. The Red Devils, though, come into this game on the back of successive home defeats this past week.

Fulham, on the other hand, have been one of the more resilient teams in the Premier League this season. At the same time, though, the Cottagers have been extremely goal-shy for the most part, which has, in turn, contributed to their relegation back to the Championship. Scott Parker & co. have also been in a bit of a rut lately, with their last win coming back in early March.

The reverse fixture, played at Craven Cottage back in January, saw Manchester United come from a goal down to beat Fulham 2-1. Ahead of the latest meeting between the two sides, The Hard Tackle takes a closer look at the encounter.

Ole Gunnar Solskjaer has been handed a twin boost on the team news front ahead of the visit of Fulham. On Tuesday, the Manchester United boss will only have to make do without a couple of first-team players.

The major absentee is once again Harry Maguire, with the Manchester United captain only likely to be available ahead of the UEFA Europa League final next week. The good news, though, comes in the form of the return of Daniel James and Anthony Martial, both of whom are in contention to feature.

Neither James nor Martial, though, is likely to start, with the attacking quartet pretty much picking itself. Considering this game will witness the return of fans at Old Trafford, Solsjaer is likely to hand a start to Edinson Cavani again, with the veteran striker experiencing a semblance of the atmosphere at the stadium for the first time.

Mason Greenwood and Marcus Rashford ought to be the two wide men, with Bruno Fernandes reprising his usual no. 10 role. Rashford’s return on the left wing means Paul Pogba will drop into the midfield double pivot, with Fred likely to make way, withScott McTominay being his partner in the middle of the park.

Finally, in defence, the key decision is pertaining to Eric Bailly and whether he is preferred over Axel Tuanzebe again. The Ivorian should get the nod to pair up with Victor Lindelof at the heart of Manchester United’s backline, with Luke Shaw and Aaron Wan-Bissaka being the two full-backs. In goal, there is no looking past Dean Henderson, even though he was not exactly impressive last time out against Liverpool. 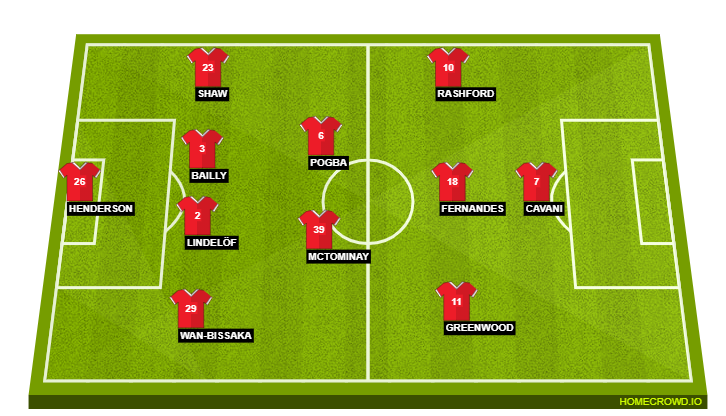 Like his counterpart in the Manchester United dugout, Scott Parker is set to welcome back a first-team player to the fold when Fulham make the trip to Old Trafford. However, on Tuesday, the visitors will continue to be bereft of the services of three first-team players.

While Mario Lemina is back at Parker’s disposal after being ineligible to take on parent club Southampton this past weekend, the likes of Terence Kongolo (knee), Antonee Robinson (ankle) and captain Tom Cairney (knee) remain on the sidelines due to their respective injuries.

Parker has tinkered with the formations a fair bit in recent weeks and against Manchester United on Tuesday, the Fulham boss should field his side in a 4-4-2 setup, with Alphonse Areola an automatic pick between the sticks for the Cottagers.

Joachim Andersen, who has been linked with Manchester United among others, and Tosin Adarabioyo will likely combine at the heart of the Fulham defence, with Ola Aina and Kenny Tete being the two full-backs, who will largely stay pinned back instead of bombing forward to provide width.

Up ahead in midfield, Lemina ought to slot in alongside Harrison Reed, with the duo having the onus on them to keep a lid on Bruno Fernandes and his output. The two wide midfielders will likely be Bobby Decordova-Reid and Ademola Lookman, with the duo also staying compact during the defensive phases, when Fulham will defend with twin banks of four.

Finally, the strike partnership ought to be formed by Aleksandar Mitrovic and the impressive Fabio Carvalho, who will play off of the Serbian striker. The backup options for Fulham in the final third will be Josh Maja and Ivan Cavaleiro. 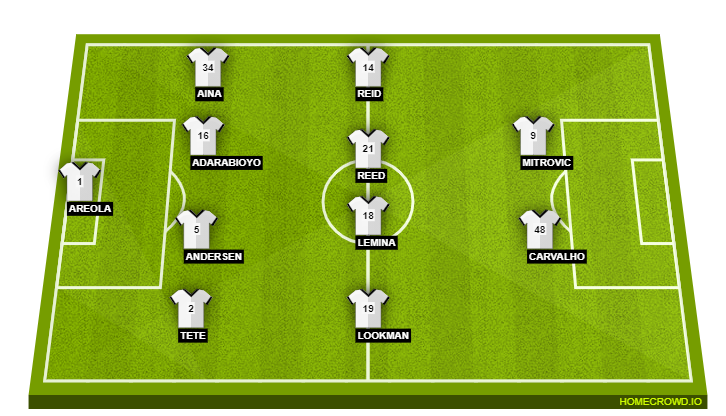 It has been a season that has promised a lot from Marcus Rashford, with the English international putting in the hard yards to fulfill the promise as well. However, Rashford has also had the tendency to disappoint at times with his output in front of goal, choosing to go for power instead of precision.

Nevertheless, the youngster is on the cusp of scoring 100th senior goal for club and country and what better way to get to the landmark than in front of a crowd at Old Trafford? A big game is on the horizon for Rashford and he will be eager to be back at his very best ahead of next week’s UEFA Europa League final.

As Fulham showed in the reverse fixture earlier in the year, they are not a side to be taken lightly by any means. And, with Harry Maguire still unavailable, Manchester United will be suspect at the back – something that the visitors will hope to pounce on.

Having said that, Scott Parker’s men are quite wasteful in the final third and despite a fair few shortcomings of the Manchester United defence, Fulham are unlikely to find a way past Dean Henderson.

At the opposite end, Marcus Rashford should complete his century of senior goals while Edinson Cavani could score in front of Old Trafford faithfuls for the first time. With that in mind, The Hard Tackle predicts a 2-0 win for Ole Gunnar Solskjaer & co.