Barcelona will be desperate to keep their fading La Liga title hopes alive when they welcome Celta Vigo to Camp Nou on Sunday.

The 2020/21 La Liga season is in its endgame, with the title race now essentially down to just two teams. Barcelona now remain mere outside contenders for the league triumph, but will hope to somehow remain in the hunt when they play hosts to Celta Vigo on Sunday evening.

Barcelona have endured a hit-and-miss 2020/21 campaign, having started off slowly before closing the gap to Atletico Madrid almost entirely. Along the way, the Blaugrana have played some of the most eye-catching football in La Liga, although in recent weeks, they have dropped the ball, having failed to win three of their last four games, meaning they trail the league leaders by four points.

Celta Vigo, on the other hand, have been much-improved in 2020/21 than they had been last term, having come close to clinching a top six finish which could have yielded them UEFA Europa League qualification. Nevertheless, finishing 8th will also be a decent achievement, with their recent form being splendid – four wins in four games.

The reverse fixture, played at Balaidos back in October, saw Barcelona run out 3-0 winners over Celta Vigo, with Ansu Fati and Lionel Messi on target. Ahead of the latest meeting between the two sides, The Hard Tackle takes a closer look at the encounter.

🗣 @RonaldKoeman: The important thing is to continue to believe and fight. We must win these two games.

Ronald Koeman has a couple of fresh roster issues hampering his preparations ahead of the visit of Celta Vigo. On Sunday, the Barcelona manager will be bereft of the services of as many as four first-team players.

The latest absentee is Frenkie de Jong, who is suspended due to an accumulation of yellow cards. In addition, Barcelona are also missing Sergi Roberto (knock), Philippe Coutinho (knee) and Ansu Fati (knee), each of whom have played their final game of the season.

The absence of de Jong, meanwhile, means Koeman could shuffle his formation around slightly, reverting to the 3-4-3, with Pedri and Sergio Busquets pairing up in the double pivot in the middle of the park. Meanwhile, with Roberto unavailable, Sergino Dest is a certainty as the right wing-back while Jordi Alba picks himself on the left flank.

The changed system brings Ousmane Dembele into the picture for good, with the Frenchman set to pair up with Antoine Griezmann and captain Lionel Messi in the final third. At the back, meanwhile, Ronald Araujo should get the nod over Oscar Mingueza, with Gerard Pique and Clement Lenglet being his central defensive partners. 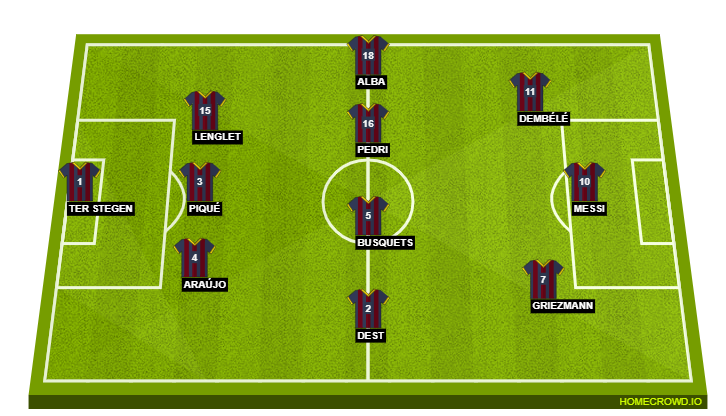 Like his counterpart in the Barcelona dugout, Eduardo Coudet has plenty of pressing injury issues to deal with ahead of the trip to Camp Nou. On Sunday, the Celta Vigo manager will have to make do without as many as nine first-team players, who have all missed the cut for the travelling squad.

Sergio Alvarez, Ruben Blanco, Renato Tapia, Jeison Murillo, Hugo Mallo, Ferreyra, Jose Fontan and Emre Mor are all out due to their respective injuries, while David Costas and Jorge Saenz have been excluded for unspecified reasons. However, in some good news, Nestor Araujo is available again after serving out his suspension last time out against Getafe.

Araujo should, therefore, return to the heart of the Celta Vigo defence, with Joseph Aidoo being his partner at the back. Out wide, Kevin Vazquez and Aaron Martin will be the two full-backs, with the duo having the onus on them to provide the width in the final third. In goal, there is no looking past Ivan Villar, in the absence of Alvarez and Blanco.

Meanwhile, Celta Vigo will once again be set up in a 4-1-3-2 formation that will see Fran Beltran sit at the base of the midfield in the absence of Tapia, hoping to keep a lid on Lionel Messi and Pedri’s output. He will receive defensive support from former Barcelona midfielder Denis Suarez, who will also provide the creative impetus higher up the pitch.

Brais Mendez will be the bundle of energy in the final third, with Nolito likely to be deployed on the left flank. Finally, the strike partnership will be former by Santi Mina and Iago Aspas, whose output in the final third will hold the key for Celta Vigo against Barcelona. 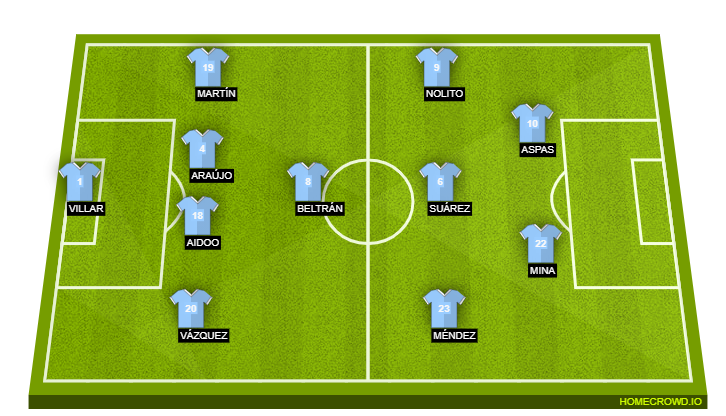 Who else but Lionel Messi? Whenever Barcelona have needed to pull the rabbit out of the hat, it is Messi who has been the magician for them. Yes, there have been moments when he has been contained by the opposition. However, more often than not, the Argentine wizard has pulled off the impossible, with Barcelona still heavily dependent on him.

Suffice to say, if the Blaugrana still harbour hopes of somehow turning things around in the title race, it is Messi who needs to inspire a big win over Celta Vigo on Sunday. Having also been one of their better players against Levante, the Barcelona captain will hope for more support from his teammates as well. Will Messi produce the goods, though?

Barcelona did all the hard work to catch up to Atletico Madrid, but have messed it all up at the most crucial juncture of the season. The final nail in their coffin, though, will not be a win for Atletico Madrid or Real Madrid, but another game wherein they drop points, this time against Celta Vigo.

Lionel Messi should be in his elements, but a vulnerable Barcelona defence will show its true colours yet again. With that in mind, The Hard Tackle predicts a 2-2 draw between Barcelona and Celta Vigo, in a result that officially ends the season for the Catalan giants.