AC Milan will be hoping to consolidate their place in the Serie A top four when they welcome Cagliari to San Siro on Sunday.

The penultimate round of fixtures is underway in the 2020/21 Serie A season and there remains no room for error for the top four hopefuls, with the race to secure a place in the UEFA Champions League intensifying. AC Milan will bring an end to Sunday’s action when they play hosts to Cagliari at San Siro.

AC Milan and their fans will remember 2020/21 as the season wherein they dropped the ball massively in the title race, eventually falling well short of newly-crowned champions Inter Milan. Such has been their downfall since the turn of the year that the Rossoneri are now having to battle for a top four finish, although their form in recent weeks has improved massively, as illustrated by the 7-0 rout of Torino.

Cagliari, on the other hand, are one of the form teams in Serie A right now, having slowly steered clear of the relegation battle. Having flirted with possible relegation all season long, Gli Isolani have woken up from their slumber in the past month or so, claiming 14 points from the available 18 in their last six league outings. As a result, Leonardo Semplici & co. are currently 16th, five clear of the drop zone.

The reverse fixture, played at the Sardegna Arena back in January, saw AC Milan eke out a 2-0 win over Cagliari, with Zlatan Ibrahimovic scoring a match-winning brace. Ahead of the latest meeting between the two sides, The Hard Tackle takes a closer look at the encounter.

Stefano Pioli has been handed a boost on the team news front ahead of the visit of Cagliari. On Sunday, the AC Milan manager will be bereft of the services of just one first-team player, with Zlatan Ibrahimovic having had his season ended prematurely by a knee injury.

In fact, the veteran Swedish striker will not be a part of the European Championship this summer, with the injury being a huge blow for him. The good news, though, comes in the form of the return of Alexis Saelemaekers, who is available again after having served his one-match ban last time out.

Saelemaekers should be reinstated to the starting lineup straightaway, taking his place on the right flank, as has been the case in recent times. Meanwhile, with Brahim Diaz stepping up superbly of late, it is likely that he will once again reprise the no. 10 role, while Hakan Calhanoglu will feature from the left flank, essentially having a free role, albeit with added defensive responsibility.

As for the central striker’s berth, Ibrahimovic’s void will once again be filled by Ante Rebic, who scored a hat-trick earlier this week against Torino, leading the line for AC Milan against Cagliari as well. Speaking of goalscorers in the most recent game, Theo Hernandez was in his elements last time out.

The Frenchman ought to retain his place on the left side of the AC Milan defence, with Davide Calabria starting on the right flank again. Simon Kjaer and Fikayo Tomori will form the central defensive partnership once again, meaning Alessio Romagnoli misses out. Finally, in goal, there is no looking past Gianluigi Donnarumma. 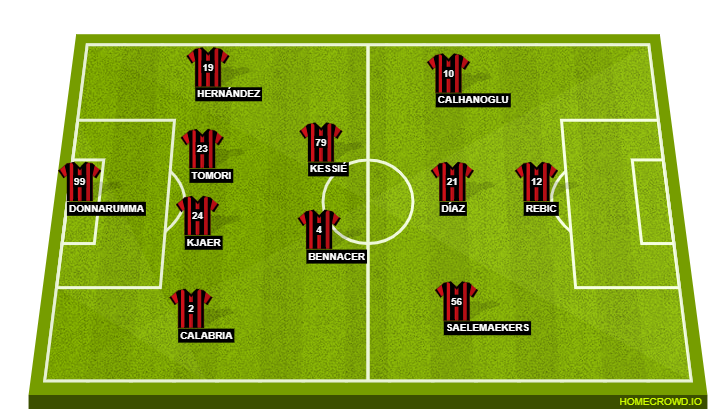 Like his counterpart in the AC Milan dugout, Leonardo Semplici has some pressing issues to deal with ahead of the trip to San Siro. On Sunday, the Cagliari manager will have to make do without as many as five first-team players.

Sebastian Walukiewicz (back), Arturo Calabresi (thigh), Marko Rog (ACL), Gaston Pereiro (COVID-19) and Riccardo Sottil (back) are all unavailable for the trip to take on AC Milan. Alessio Cragno is set to take his place between the sticks for the visitors.

In front of the 26-year-old, Cagliari will be set up in a 3-4-1-2 formation, with Diego Godin taking the responsibility of marshaling the central defensive unit. The veteran Uruguayan defender will have Luca Ceppitelli and Andrea Carboni for company at the back, while Nahitan Nandez and Charalampos Lykogiannis ought to be the two wing-backs.

The wing-back duo will have the responsibility of providing the width in the final third, while also giving support to the three centre-backs to create a back five during the defensive phases. As for the midfield unit, Razvan Marin and Alfred Duncan will hope to keep a lid on the output of Brahim Diaz and Hakan Calhanoglu.

The creative impetus, though, will be provided by Radja Nainggolan, who will aim to link up with the two strikers smartly. The aforementioned strike partnership ought to be formed by Joao Pedro and Leonardo Pavoletti, both of whom will hope to have their scoring boots on to test Gianluigi Donnarumma in the AC Milan goal. 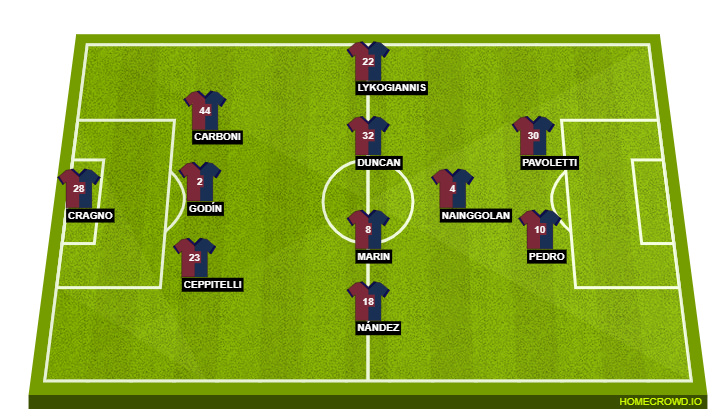 As the season reaches its end, AC Milan seem to be finding new heroes all across the pitch. There is Fikayo Tomori, who has settled in well and has moved on superbly form a couple of poor displays. In the final third, Brahim Diaz and Alexis Saelemaekers have stepped up lately, while Ante Rebic has also shown that he has what it takes to make a difference in the absence of Zlatan Ibrahimovic.

With Ibrahimovic done for the season, Rebic must continue from where he left off against Torino last time out and inspire AC Milan to another win. If the Rossoneri manage to grab all three points, their place in the UEFA Champions League next season will be all but confirmed. A big game beckons Rebic and Milan.

This is one of those potential banana skin matches for AC Milan. Cagliari may be a lowly 16th, but have shown a lot of inspiration to steer clear of the relegation zone in recent weeks. Now one of the form teams in Serie A, Gli Isolani are not a side to be taken lightly and will give Milan a run for their money.

The hosts, though, will be brimming with confidence after expertly dismantling Torino earlier this week. With that in mind, The Hard Tackle predicts a the Rossoneri to grab all three points once again, albeit at the end of a 3-2 win, meaning they will be clear of Juventus by three points following the Bianconeri’s win over Inter Milan on Saturday.