The top four race in the Premier League is heating up as we near the end of the season, with no team having any room left to slip up. On Sunday, three of the top four hopefuls will be in action, with Tottenham Hotspur having the chance to put pressure on the rest of their rivals first up, when they play hosts to Wolves at the Tottenham Hotspur Stadium.

2020/21 has been a tumultuous campaign for Tottenham, who have gone from potentially being title contenders in the first quarter of the Premier League season to being outside candidates to secure a top four finish. Along the way, Jose Mourinho has also been relieved of his duties, but that has galvanized Spurs, who did win their first two league games under Ryan Mason before being beaten 3-1 by Leeds United last weekend.

Wolverhampton Wanderers, like Tottenham, have endured a disappointing 2020/21 campaign. Having achieved a top half finish in each of their first two Premier League seasons upon returning from the Championship, Wolves have been underwhelming this term and are set to end up in their lowest finish since becoming a Premier League side again, though they have stepped up in recent weeks, with just one defeat in five.

The reverse fixture, played at the Molineux back in December, saw Wolves come back from a goal down to tie Tottenham down to a 1-1 draw. Ahead of the latest meeting between the two sides, The Hard Tackle takes a closer look at the encounter.

"Our target is to get as many points as possible."@RyanMason on Wolves and our remaining fixtures.

Ryan Mason does not have many pressing injury concerns hampering his preparations ahead of the visit of Wolves. On Sunday, the Tottenham Hotspur interim boss will be bereft of the services of just one first-team player, with Ben Davies out for the remainder of the season due to a calf injury.

In the absence of Davies, Sergio Reguilon will play each of the last three games of the season as the left-back for Tottenham, while on the opposite flank, Serge Aurier, who has recently been linked with Real Madrid, should get the nod over Matt Doherty for the right-back slot.

At the heart of the Tottenham defence, Toby Alderweireld and Eric Dier should pair up, with Hugo Lloris being the automatic pick in goal. Up ahead in midfield, Giovani Lo Celso is likely to be favoured to partner Pierre-Emile Hojbjerg in the double pivot, with the Argentine providing the forward thrust from the middle of the park.

Like Lo Celso, Dele Alli has been reinvigorated under the tutelage of Mason, with the Englishman expected to reprise the no. 10 role against Wolves. Gareth Bale has improved as well, and he will look to be direct in his approach from the right wing, allowing Aurier to overlap with pace. Son Heung-min and Harry Kane have been rare bright spots for Tottenham this term and are certain to start. 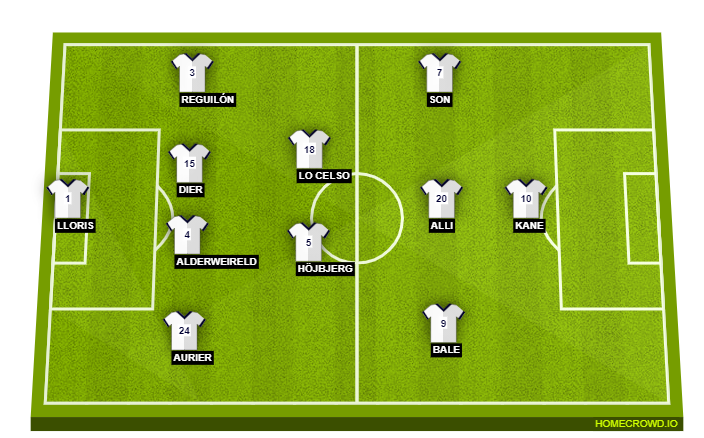 Unlike Ryan Mason in the Tottenham dugout, Nuno Espirito Santo has been handed a boost on the team news front ahead of the trip to the Tottenham Hotspur Stadium. On Sunday, the Wolves boss might only have to make do without three first-team players.

Willy Boly is available again after completing his recovery from COVID-19, Nuno confirmed during his pre-match press conference, and so is Marcal, who has recovered from a hip injury. The duo, though, are unlikely to be fit enough to start, as they continue to regain full fitness. That just leaves Wolves without long-term absentees Jonny (knee), Pedro Neto (knee) and Raul Jimenez (head).

Jimenez, though, is engaged in parts of training and is gradually inching closer to his return to peak fitness. Meanwhile, with Boly unlikely to be fit enough to start, Max Kilman will line up alongside Romain Saiss and captain Conor Coady in the three-man central defensive unit, which will provide cover to Rui Patricio in goal.

Up ahead in midfield, Morgan Gibbs-White was in inspired touch against Brighton & Hove Albion last weekend and should get the nod ahead of Leander Dendoncker. The 21-year-old will provide company to Ruben Neves and Joao Moutinho, with the Portuguese duo in-charge of wresting control of the game from Tottenham.

Gibbs-White will, therefore, take up advanced positions on the pitch for the most part, essentially forming a front trio alongside Fabio Silva, who has been linked with Real Madrid recently, and Adama Traore, who has stepped up in recent games for Wolves. Nelson Semedo and Rayan Ait-Nouri should be the two wing-backs, providing the width higher up the pitch against Tottenham. 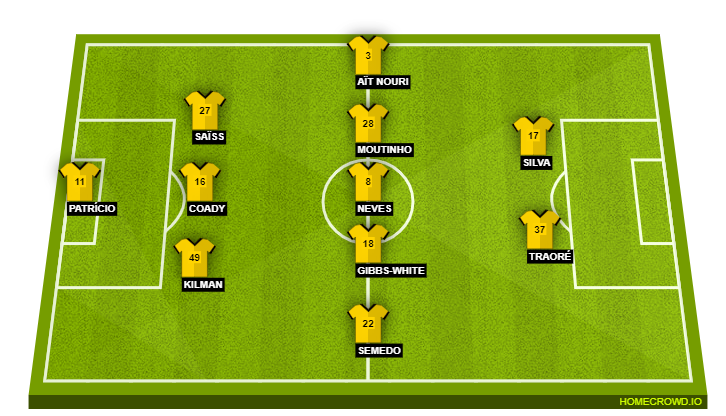 2020/21 has been the Harry Kane and Son Heung-min show as far as Tottenham Hotspur are concerned. Gareth Bale was expected to forge a formidable trifecta along with the star attacking duo, but has blown hot and cold at an alarming rate so far this term. This has been best evident in the past fortnight or so.

After scoring a hat-trick against Sheffield United, Bale was sub-par against Leeds United last week. And, as the season approaches its end, Bale absolutely has to end it on a high, considering his future is up in the air once again ahead of the summer transfer window. A big performance against Wolves will go a long way in correcting that, but will the Welshman deliver the goods?

Tottenham Hotspur have some tricky tests to end the season and it is not certain that they will even qualify for the UEFA Europa League, with a top four finish a distant dream now. Wolves have been a thorn in their sides, especially at home and they should give them a run for their money.

However, Gareth Bale should step up, while Son Heung-min will likely extend his fine run of form under Ryan Mason to deliver a crucial win by the odd goal. With that in mind, The Hard Tackle predicts a 2-1 win for Spurs, in what will be a big result for the north Londoners.