Newly-crowned Premier League champions Manchester City will be in celebratory mood when they take on Newcastle United at St. James’ Park on Friday.

The title race for the 2020/21 Premier League season is officially over following Leicester City’s 2-1 win over Manchester United earlier this week. Newly-crowned champions Manchester City kick things off in Gameweek 36, as they travel to St. James’ Park to lock horns with Newcastle United.

Newcastle United have been in resurgent mood in recent weeks. Having flirted with relegation not too long ago, the Magpies have pulled clear of the drop zone due to a run of form that has seen them lose just once in their last six games. Most recently, Steve Bruce & co. handed Leicester City a shock 4-2 defeat, a result that eventually went on to confirm their status mathematically.

Manchester City, on the other hand, have recovered from a horrendous start to the season to be crowned the Premier League champions for 2020/21. The Citizens were once as low as eighth in the standings, but have been nothing short of imperious in the second half of the season, one or two sub-par displays in the past month notwithstanding.

The reverse fixture, played at the Etihad back in December, saw Manchester City cruise to a 2-0 win over Newcastle United, with Ilkay Gundogan and Ferran Torres on target. Ahead of the latest meeting between the two sides, The Hard Tackle takes a closer look at the encounter.

"In hindsight I should have taken him off before but it's his other side [to his previous injury]. We expect it to be two or three weeks so it's nothing like the last one which is good news but still a shame he can't finish the season with us." pic.twitter.com/L5NmKD9Ytk

Steve Bruce has a fresh injury concern hampering his preparations ahead of the visit of Manchester City. On Friday, the Newcastle United manager will be bereft of the services of as many as seven first-team players.

The major absentee for the hosts is Callum Wilson, who sustained a season-ending hamstring injury. Apart from the English striker, Newcastle are also missing the likes of Karl Darlow (knee), Jamaal Lascelles (foot), Elliott Anderson (hip), Isaac Hayden (knee) and Ryan Fraser (groin) due to injuries while Fabian Schar continues to serve his suspension.

In the continued absence of Schar, Ciaran Clark ought to line up in the three-man central defensive unit, after Emil Krafth featured in his stead last time out against Leicester. Clark will partner Paul Dummett and Federico Fernandez at the back, with Martin Dubravka taking his place in goal.

Up ahead in midfield, Jonjo Shelvey will have the onus on him to keep a lid on Manchester City’s creative output, with Miguel Almiron and Joe Willock providing the forward thrust from the middle of the park. Out wide, Jacob Murphy and Matt Ritchie will be the two wing-backs, with Joelinton coming in for Wilson to form the strike partnership with Allan Saint-Maximin. 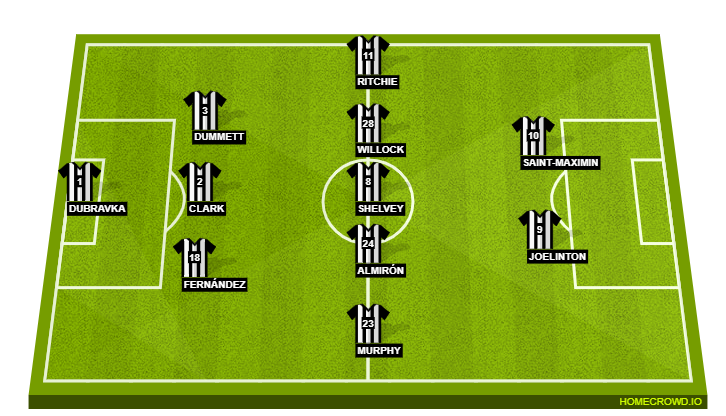 Like his counterpart in the Newcastle United dugout, Pep Guardiola has a pressing fitness issue to deal with ahead of the trip to St. James’ Park. On Friday, the Manchester City boss will have to make do without just one first-team player, but that player is one of his most important squad members.

Indeed, Kevin De Bruyne misses out for Manchester City due to a slight muscle issue that is set to keep him out for just the game against Newcastle United. However, there is some positive news as well, with John Stones available after having served his three-match suspension.

Stones should be reinstated at the heart of the Manchester City defence, where he should reunite with usual partner Ruben Dias. Kyle Walker and Oleksandr Zinchenko should be the two full-backs, with the former carrying a great deal of threat down the right flank. The defensive line should provide cover to Ederson Moraes between the sticks.

Up ahead in midfield, Rodri should sit at the base of the three-man unit, with Guardiola likely to revert to his preferred 4-3-3 formation after a few experiments lately. The Spaniard will have Ilkay Gundogan and Bernardo Silva for company in the middle of the park, with Sergio Aguero, Riyad Mahrez and Phil Foden forming a formidable attacking partnership. 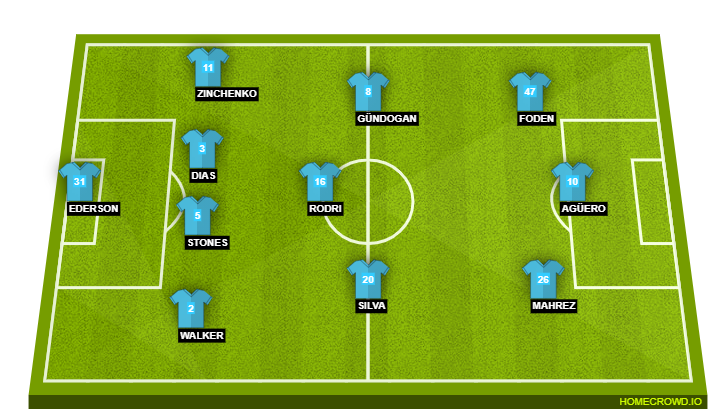 Whenever Manchester City feature, there are plenty of players who are worthy of making it to such a section. Sergio Aguero is playing his final few games for the Citizens, while Ilkay Gundogan and Phil Foden have been the go-to men for Pep Guardiola this season. However, keeping the UEFA Champions League final against Chelsea in mind, it is John Stones who takes the cake here.

The English defender has been a player reborn this season and with the biggest game of the season looming, the race to partner Ruben Dias at the heart of the defence is well and truly on, with Aymeric Laporte being the other contender. After Laporte’s indifferent showing against Chelsea last week, the onus is now on Stones to prove his credentials. Will he rediscover his best?

This is a potentially tricky fixture for Manchester City, considering Pep Guardiola has been shuffling his pack quite a bit lately. Indeed, Newcastle United have been quite spirited in recent weeks and the win over Leicester City last week showed that they can step up.

However, the Magpies have not won any of the nine Premier League matches that Callum Wilson has missed this season and the one on Friday will not be any different either, as they will lack that bite in the final third. With that in mind, The Hard Tackle predicts a 2-0 win for Pep Guardiola & co.