Real Madrid will be eager to return to winning ways and get their La Liga title bid back on track when they take on Granada at Los Carmenes on Thursday.

The 2020/21 season is in its endgame and in Spain, just two complete matchdays are left to be played once this midweek round of fixtures is done and dusted. The defending champions will be in action on Thursday night, as Real Madrid travel to Los Carmenes to lock horns with Granada.

Granada have once again impressed with their tenacious displays this season while also adding more goals to their game. Unlike last season, UEFA Europa League qualification might be beyond their means, but the Nazaries are still in a fine position to claim a top half finish. That being said, their recent run has been rather underwhelming, with a shock win over Barcelona being their only success in four La Liga outings.

Real Madrid, on the other hand, have been playing catch-up in the title race all through the season after slow start to their campaign. The reigning La Liga champions, though, have caught up well to local rivals Atletico Madrid, who are currently just two points ahead of them. However, Los Blancos have started slipping up at a crucial juncture, dropping points in three of their last five games.

The reverse fixture, played at Estadio Alfredo Di Stefano back in December, saw Real Madrid grab a hard-fought 2-0 win over Granada, with Casemiro and Karim Benzema on target. Ahead of the latest meeting between the two sides, The Hard Tackle takes a closer look at the encounter.

Diego Martinez has a number of fresh roster issues hampering his preparations ahead of the visit of Real Madrid. On Thursday, the Granada manager could be bereft of the services of as many as ten first-team players due to injuries, health scare or suspension.

The likes of Carlos Neva (hamstring), Neyder Lozano (head), Jesus Vallejo (knock), Luis Milla (hamstring) and Kenedy (ankle) were already on the sidelines, with Angel Montoro also missing out against Real Madrid after sustaining a hamstring injury last time out against Real Betis.

Yangel Herrera and Domingos Duarte, meanwhile, are minor doubts, while Roberto Soldado serves the second of his three-match ban. And, the latest absentee for Granada is captain Victor Diaz, who misses out versus Real Madrid after testing positive for the coronavirus.

Martinez is, therefore, down to his bare bones pretty much in every department except goalkeeping, with Aaron Escandell expected to get the nod between the sticks ahead of Rui Silva. In front of the 25-year-old, Granada will line up in a 4-2-3-1 formation.

The possible absence of Duarte and Real Madrid loanee Vallejo would mean Nehuen Perez is likely to line up alongside German Sanchez at the heart of the Granada defence. Out wide, Quini and Dimitri Foulquier will be the two full-backs for the hosts, who will largely stay pinned back but will  also carry a threat on the counters.

Up ahead in midfield, Herrera’s void ought to be filled by Yan Eteki, who will partner Maxime Gonalons in the double pivot, with the duo having the onus on them to keep a lid on Real Madrid’s creative output. Fede Vico will reprise the no. 10 role, providing the creative impetus higher up the pitch.

The rest of the lineup pretty much picks itself, with Darwin Machis and Antonio Puertas being the two wide men who will aim to veer infield and create space for the full-backs to operate, while Luis Suarez will lead the line for Granada against Real Madrid. 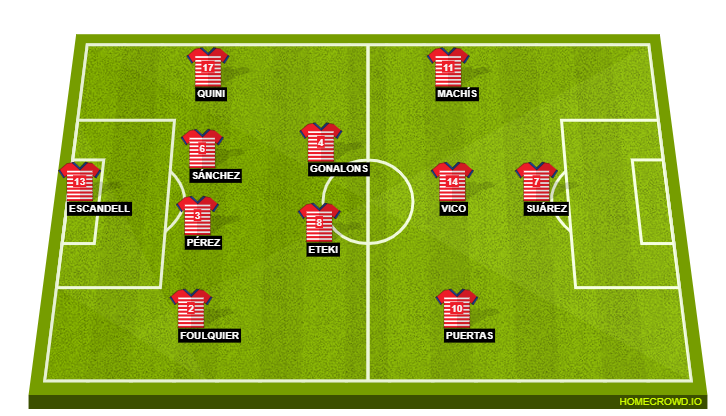 Like his counterpart in the Granada dugout, Zinedine Zidane has a couple of fresh concerns to deal with ahead of the trip to Los Carmenes. On Thursday, the Real Madrid manager will have to make do without as many as six first-team players, with defence, in particular, posing a great deal of issues.

In fact, Zidane has just one natural senior full-back at his disposal, with Alvaro Odriozola being fit and available despite sustaining a knock last time out against Sevilla. However, the likes of Ferland Mendy (shin), Marcelo (knock) and Dani Carvajal (hamstring) remain on the sidelines, as do Sergio Ramos (hamstring), Raphael Varane (muscle injury) and Lucas Vazquez (knee).

The availability of Odriozola is a major positive for Zidane, who will only have to dip his toes into the Castilla side to pick Miguel Gutierrez, who will start as the left-back. At the heart of the Real Madrid defence, there is no looking past Nacho and the ever-improving Eder Militao, with Thibaut Courtois a certainty in goal.

Up ahead in midfield, Luka Modric has been looking in need of a rest and should make way for Federico Valverde, who will provide defensive support to Casemiro while also giving the forward thrust from the middle of the park. The onus of creating the chances, meanwhile, will fall on Toni Kroos.

As for attack, Marco Asensio made a definitive impact off the bench against Sevilla and should be recalled to the starting lineup. The same goes for Eden Hazard, who will likely take his place on the left wing, with Karim Benzema spearheading the Real Madrid attack against Granada. 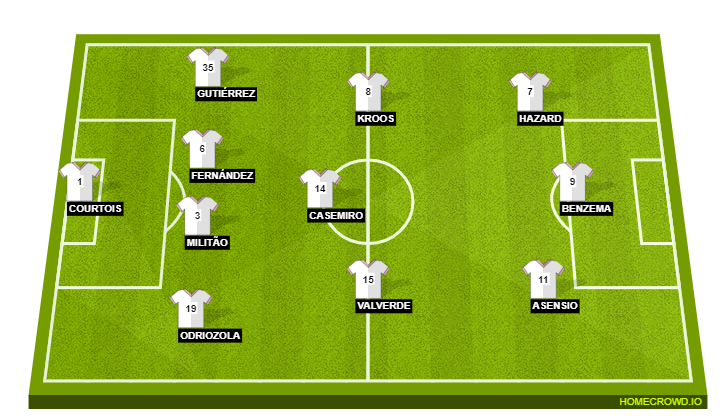 There are plenty of options for this section, with Federico Valverde among those facing a crunch fixture on a personal level, while Eder Militao and Nacho have a lot riding on them at the back. Karim Benzema is always under the spotlight when Real Madrid take the field, but it is Eden Hazard who is the player to watch in our preview.

This time last week, Hazard was in the eye of the storm for events in the aftermath of Real Madrid’s defeat to Chelsea. However, he has since hit back with a goal against Sevilla, even though he did not know much about that strike. Against Granada, though, Hazard will have the chance to make amends properly and an influential game should then pave the way for a big win.

Real Madrid are hobbling to the finish line of the 2020/21 season and it should be more of the same against Granada, who will likely fancy their chances of troubling a makeshift defence. Having said that, with Marco Asensio and Eden Hazard returning to the side with a point to prove, Los Blancos ought to get the better of their hosts and go back to Madrid with all three points.

With that in mind, The Hard Tackle predicts a 2-1 win for Zinedine Zidane & co. The result could even help Real Madrid climb to the top of the La Liga table, depending on the result of the game between Real Soceidad and leaders Atletico Madrid on Wednesday.