An age-old London rivalry will be renewed on Wednesday, when Chelsea welcome Arsenal to Stamford Bridge in a key game for both sides.

The action continues to come at a breakneck pace in leagues across Europe and the Premier League is no different, with the elongated Gameweek 35 continuing this midweek. On Wednesday, all eyes will be on a London derby, as Chelsea play hosts to Arsenal at Stamford Bridge, with both sides in need of a win to achieve their European objectives.

Chelsea have been a team transformed under the tutelage of Thomas Tuchel, having become the most solid team in Europe while also gradually starting to show quality in terms of their attacking ideas. This has been evident most recently in the Blues’ run to the UEFA Champions League final, while the come-from-behind 2-1 win over Manchester City this past weekend showed their growing fighting spirit.

Arsenal, on the other hand, continue to be mired in mediocrity, with the 2020/21 season set to end in trophyless fashion for them. The Gunners have, in fact, seemingly gone backwards under Mikel Arteta, often showing a lack of ideas on the pitch, with even UEFA Europa League qualification starting to look unlikely, although back-to-back wins in the league have left them just six points adrift of fifth-placed West Ham United.

The reverse fixture, played at the Emirates back in December, saw Arsenal run out 3-1 winners over Chelsea with Alexandre Lacazette, Bukayo Saka and Granit Xhaka on target while Tammy Abraham netted for the Blues. Ahead of the latest meeting between the two sides, The Hard Tackle takes a closer look at the encounter.

Thomas Tuchel has a fresh injury concern hampering his preparations ahead of the visit of Arsenal. On Wednesday, the Chelsea manager will have to make do without a couple of first-team players, with Mateo Kovacic still not fit enough to return from a hamstring injury, while Danish defender Andreas Christensen has picked up his own hamstring issue.

In Christensen’s absence, Kurt Zouma is set to return to the starting lineup, with Thiago Silva likely to be preserved for the FA Cup final this weekend. Zouma will take his place at the heart of Chelsea’s three-man central defensive unit, with Cesar Azpilicueta and Antonio Rudiger starting alongside him. In goal, there is no looking past Edouard Mendy.

Up ahead in midfield, Jorginho ought to be back in the starting lineup after being given a breather by Tuchel last time out against Manchester City. Billy Gilmour should come in for N’Golo Kante, who is another player who needs to be preserved for the cup final. As a result, Gilmour ought to get another chance to impress.

Marcos Alonso scored the match-winner against Manchester City but is likely to make way for Ben Chilwell at left wing-back, while Reece James is a certainty on the right flank. Finally, in attack, wholesale changes are expected, with Callum Hudson-Odoi, Mason Mount and Kai Havertz starting in place of Christian Pulisic, Hakim Ziyech and Timo Werner, who is due a rest. 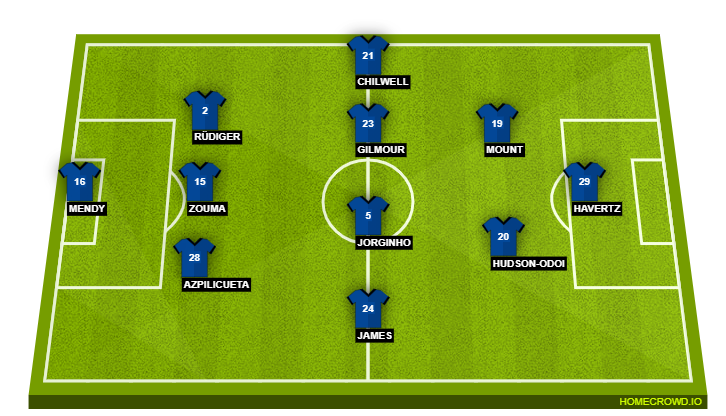 Like his counterpart in the Chelsea dugout, Mikel Arteta has a few pressing injury issues to contend with ahead of the short trip to Stamford Bridge. On Wednesday, the Arsenal boss could have to make do without as many as four first-team players.

Arteta is sweating over the fitness of Emile Smith Rowe, who sustained a knock last time out versus West Bromwich Albion. The young playmaker, though, should be fit enough to be involved, but David Luiz (hamstring) and Granit Xhaka (groin) are certain absentees while the game might have come too soon for Pablo Mari, who has only recently rejoined training.

Smith Rowe, meanwhile, is unlikely to start, with Martin Odegaard expected to be given the nod to reprise the no. 10 role. The Norwegian will likely be flanked by Nicolas Pepe and Pierre-Emerick Aubameyang, with Alexandre Lacazette leading the line for Arsenal against Chelsea.

In midfield, Mohamed Elneny could get a chance to impress, while Thomas Partey is a certainty alongside him in the double pivot, meaning Dani Ceballos misses out. At the back, with Mari still not fully fit, Rob Holding and Gabriel Magalhaes form the central defensive partnership, with Kieran Tierney and Calum Chambers being the two full-backs. In goal, Bernd Leno ought to pip Mat Ryan. 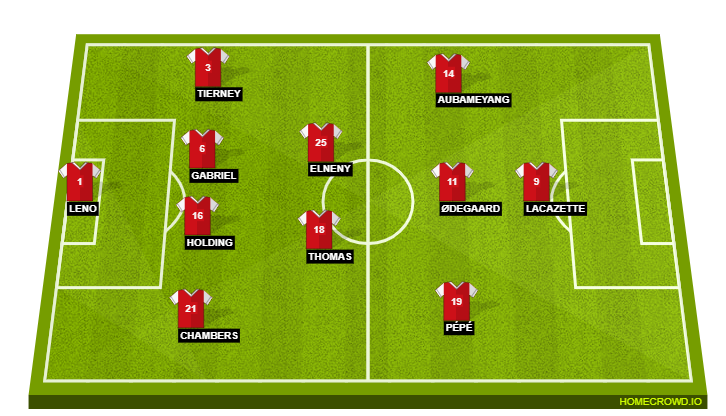 A tumultuous season is reaching its end for Arsenal and no player will be more glad to see the back of 2020/21 than Pierre-Emerick Aubameyang. There was so much hype generated by his contract renewal, and the Gunners really should have gone on to the next level with their captain flying high on confidence.

However, the exact opposite has proven to be the case, with Aubameyang being a shell of the domineering attacker he once was. The game against Chelsea, though, gives him an opportunity to not only end the season on a high but show that he can still cut it with the best of teams in the world. Will the Arsenal captain deliver the goods, though?

Arsenal might be in a positive moment after beating West Bromwich Albion, but in fairness, they were really outplayed by a Baggies side that was outdone by poor finishing. Chelsea, on the other hand, were at their resilient best when beating Manchester City and are in their best moment this season.

With that in mind, there really seems to be no way that Arsenal could get the better of Chelsea, who could be largely untroubled by their London rivals on Wednesday. The Hard Tackle, therefore, is going for a rather straightforward 2-0 win for Thomas Tuchel & co. this Wednesday.