The next turning point in the Serie A top four race will beckon us when Juventus welcome AC Milan to the Allianz Stadium on Sunday.

The games continue to come thick and fast all across Europe and in Serie A, Matchday 35 of the 2020/21 season is underway. As the top four race intensifies, Juventus and AC Milan will push for all three points to get closer to sealing a place in next season’s UEFA Champions League, when they lock horns at the Allianz Stadium on Sunday night.

Juventus have been dismal in the defence of their Serie A crown, which now rests on the head of Inter Milan, who have broken the Bianconeri’s hegemony over Italian football. The focus now shifts towards sealing a top four spot, with no room left for any slip-ups, especially following Napoli’s big win over Spezia on Saturday.

That result also means that AC Milan can ill afford to produce an umpteenth poor performance, having already gone from title contenders to top four hopefuls. The Rossoneri, though, have the best away record in Serie A this season, having won 13 of their 16 matches on the road so far, losing just twice, although they did get beaten in their last away game.

The reverse fixture, played at San Siro back in January, saw Juventus run out 3-1 winners over AC Milan, with Federico Chiesa scoring a match-winning brace. Ahead of the latest meeting between the two sides, The Hard Tackle takes a closer look at the encounter.

🎙 @Pirlo_official: "For tomorrow's match we will have all the players available. They have all trained well these past few days, so I will calmly be able to choose the best possible team. I'm expecting a good, open match."#JuveMilan #ForzaJuve

Andrea Pirlo does not have any fitness issues hampering his preparations ahead of the visit of AC Milan. On Sunday, the Juventus manager will have a full-strength squad at his disposal, he confirmed during his pre-match press conference.

Pirlo has also revealed a couple of starters, with Wojciech Szczesny set to take his place in goal. In front of the Polish keeper, Juventus will line up in their usual 4-4-2 formation, with Matthijs de Ligt and captain Giorgio Chiellini forming the central defensive partnership, while Danilo and Alex Sandro – facing an uncertain future at Juventus – being the two full-backs.

Up ahead in midfield, Adrien Rabiot is another confirmed starter, with the Frenchman hoping to make an impression in the dying stages of the season amid question marks over his future. Rabiot will pair up with Rodrigo Bentancur in the middle of the park, with the duo aiming to keep a lid on Hakan Calhanoglu.

Out wide, Federico Chiesa, who has been one of the best performers for Juventus this season, will likely return to the starting lineup, while on the right flank, there is no looking past Juan Cuadrado. Finally, the strike partnership will be formed by Alvaro Morata and the in-form Cristiano Ronaldo. 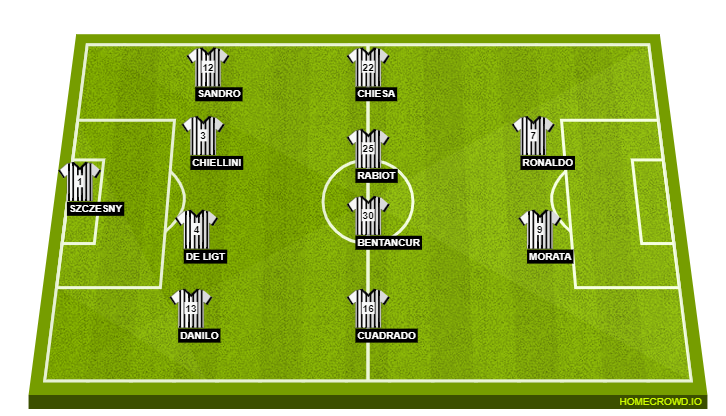 Unlike his counterpart in the Juventus dugout, Stefano Pioli does have one first-team player out on the sidelines, with Samu Castllejo missing out due to a suspension, accrued after an accumulation of yellow cards. Otherwise, the AC Milan manager has a fully-fit squad at his disposal.

Pioli should line AC Milan up in his usual 4-2-3-1 formation, with the onus on Hakan Calhanoglu to deliver the goods higher up the pitch while also carrying a great deal of threat from set-pieces. Zlatan Ibrahimovic is the automatic pick to lead the line against Juventus, while Ante Rebic and Alexis Saelemaekers being the two wide men who will be direct in their approach.

Midfield will hold the key if AC Milan are to get past Juventus and with that in mind, Ismael Bennacer needs to step up after having made some improvements last time out against Benevento. The Algerian midfielder will provide company to key star Franck Kessie in the double pivot.

At the back, Alessio Romagnoli ought to keep hold of his place in the side, with Simon Kjaer likely to be his partner at the heart of the AC Milan defence. Theo Hernandez and Davide Calabria will be the two full-backs, with Gianluigi Donnarumma taking his place between the sticks. 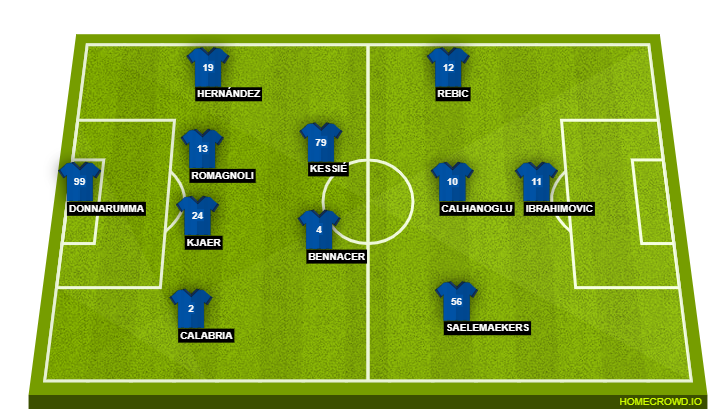 It has to be Cristiano Ronaldo. The Portuguese superstar has been the leading light for Juventus in a dismal campaign and was at hand to earn all three points last time out against Udinese. Ronaldo will now be intent on delivering the goods once again, which will not only help him get his side into the UEFA Champions League next season but also win the Capocannoniere.

With AC Milan stuttering quite a bit lately, Ronaldo will surely fancy his chances and if Juventus are to end the season on a high, he needs to be at his very best, considering just how dependent they are on him and his goals. Will the star forward be on target this Sunday?

Juventus have a fine record against AC Milan in recent years, particularly at home, where they seldom drop points. However, for all their frailties at San Siro, the Rossoneri are a tough nut to crack on the road for the most part and that should once again be the case on Sunday. The Hard Tackle, therefore, predicts a 1-1 draw between the two sides.