The battle for the European places continues with another key game in the Premier League on Sunday when West Ham United welcome Everton to the London Stadium.

The 2020/21 Premier League season is in its endgame, with just four round of fixtures remaining for the curtains to fall on the campaign. The race for the European places is more alive than ever before and one of the most pivotal games of the season will witness West Ham United play hosts to Everton at the London Stadium on Sunday evening.

West Ham United have enjoyed a fabulous 2020/21 campaign, having already raked in 19 more points than they had amassed in the entirety of last term. David Moyes has successfully wielded his magic wand and is personally back to his pomp after years of struggle. The Hammers are currently fifth on the table, three adrift of Chelsea ahead of the Blues’ game against Manchester City.

Everton, on the other hand, have made positives steps forward under the tutelage of Carlo Ancelotti but have also been susceptible to the odd listless performance. So, while the Toffees have shown a lot of potential to break into the top four, they are now lagging behind the ‘Big Six’ teams along with West Ham and Leicester City in the race to qualify for the UEFA Champions League.

The reverse fixture, played at Goodison Park back in January, saw West Ham eke out a narrow 1-0 win over Everton, courtesy a goal by Tomas Soucek. Ahead of the latest meeting between the two sides, The Hard Tackle takes a closer look at the encounter.

📋 TEAM NEWS@_DeclanRice: "We’re obviously closer to getting Declan back, because we’re another week down the line and we’re hoping that we can have him available. He’s back on the grass and closing in on it."#WHUEVE

David Moyes has been handed a boost on the team news front ahead of the visit of Everton. On Sunday, the West Ham United manager could have two first-team players back at his disposal, leaving only a couple of others remaining on the sidelines.

Mark Noble and Angelo Ogbonna are expected to be available for selection against Everton, though neither is likely to make the starting lineup. However, Moyes is still without key midfielder Declan Rice, who is being courted by the who’s who of English football, although he has returned to training and should be available next weekend. Arthur Masuaku (knee) remains sidelined.

In the absence of Rice, Manuel Lanzini ought to pair up with Tomas Soucek in the double pivot, with the Argentine reprising the deep-lying playmaker role. Soucek, on the other hand, will be the more defensive-minded of the two central midfielders.

The onus, though, will be on Jesse Lingard to once again produce the goods and end the season on a high, both on a personal level as well as for West Ham in general. Moyes will also be relieved to have Michail Antonio at his disposal, with the 31-year-old marking his return last time out with a match-winning brace against Burnley.

Lingard and Antonio will pose the greatest offensive threat for West Ham, and the Everton defence will need to be wary of their ghosting runs. The creative support will be provided by Jarrod Bowen and Said Benrahma, while Pablo Fornals will be a backup attacking option.

At the back, Craig Dawson and Issa Diop ought to pair up in West Ham’s central defensive unit, with Vladimir Coufal and Aaron Cresswell, who will also take a lot of set-pieces, being the two full-backs. Finally, in goal, there is no looking past Lukasz Fabianski. 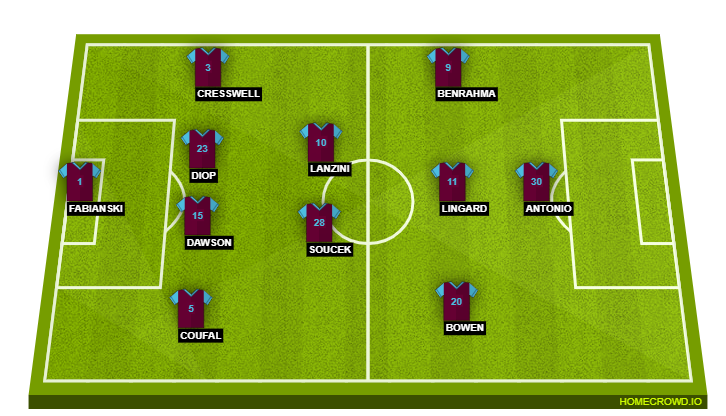 Like his counterpart in the West Ham United dugout, Carlo Ancelotti is set to greet the return of a first-team player ahead of the trip to the London Stadium, with Abdoulaye Doucoure back at his disposal. However, the Everton boss still has to make do without a couple of squad members.

The major absentee for the visitors is James Rodriguez, who is unavailable due to a calf strain that will keep him out until next week. The other player missing for Everton is Jean-Philippe Gbamin, who is out with another knee injury.

In the absence of Rodriguez, Gylfi Sigurdsson will have the responsibility on him to find teammates in pockets of space, while Richarlison’s movement will hold the key. Dominic Calvert-Lewin will spearhead the Everton attack against West Ham, with the English international posing a great deal of threat in the air as well.

Setting him up with countless deliveries should be Lucas Digne, who will also share set-piece duties with Sigurdsson. The other full-back for Everton ought to be captain Seamum Coleman, with Ben Godfrey and Michael Keane being the two centre-backs who will provide cover to Jordan Pickford in goal.

The onus, though, will be on the three central midfielders – Allan, Andre Gomes and the returning Doucoure – to keep a lid on the output of the West Ham forwards, particularly the nippy Jesse Lingard. Gomes and Doucoure will also be tasked with providing the forward thrust through the middle. 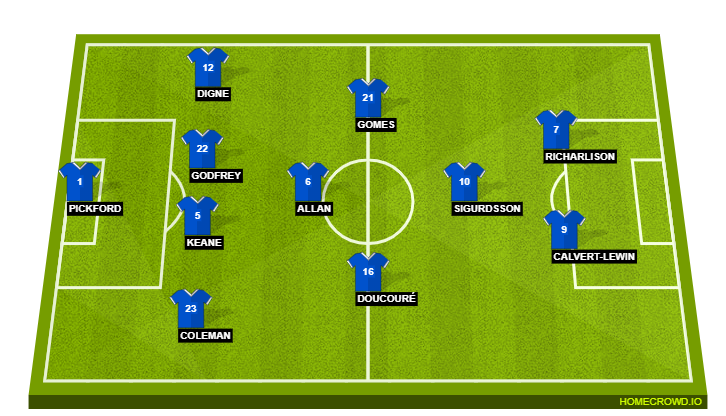 Who else but the big game changer for West Ham United in the second half of the season. Jesse Lingard has been a player reborn at the London Stadium, but it is not just on a personal level that he has been transformed, but he has also helped the Hammers in their top four charge.

In fact, such has been Lingard’s impact at West Ham, that he is already their joint-top scorer for the season despite only playing 12 games for them. Suffice to say, with the English international on top of his game, he will need to continue his good run if West Ham are to topple Chelsea – or even a stuttering Leicester City – in the top four race. Will Lingard deliver the goods?

Historically, David Moyes never loses to a team managed by Carlo Ancelotti, but Everton have a fabulous recent away record at the London Stadium. That being said, the Toffees’ past record on the road against West Ham United does not really hold a lot of weight consider the Hammers’ brilliant performances this campaign, although Everton have been no mug either.

However, the visitors are in the middle of a poor run, having won just one of their last seven games. Therefore, all signs point towards a West Ham win, although Everton should make it extremely difficult for their hosts to grab all three points. In the end, though, David Moyes & co. should do enough to claim a 2-1 win.