Leicester City will aim to consolidate third place in the Premier League table when they welcome Newcastle United to the King Power Stadium on Friday.

The 2020/21 Premier League season is in its final stretch, with Gameweek 35 beginning this week. Kicking things off for a second successive round of fixtures will be Leicester City, who will play hosts to Newcastle United at the King Power Stadium on Friday night.

Leicester City are slowly but surely edging towards avoiding the ignominy of last season, when they narrowly failed to qualify for the UEFA Champions League. This time around, the Foxes are quite comfortably ahead of West Ham United, who are five points adrift in fifth. Brendan Rodgers & co. have been in decent touch of late as well, having gone unbeaten in each of their last four games.

Newcastle United, on the other hand, have played with fire all through 2020/21, having won just nine of their 34 Premier League games this season. The Magpies, though, have lost just one of their last five games, which means they have opened up a nine-point gap to Fulham, who essentially need to win each of their last four games to have a chance of leapfrogging Steve Bruce’s men.

The reverse fixture, played at St. James’ Park back in January, saw Leicester eke out a narrow 2-1 win over Newcastle, with James Maddison and Youri Tielemans on target while Andy Carroll netted the late consolation goal. Ahead of the latest meeting between the two sides, The Hard Tackle takes a closer look at the encounter.

Brought to you by @FootballManager 👔💻 pic.twitter.com/INRj2bGjf9

Brendan Rodgers does not have any fresh injury concerns hampering his preparations ahead of the visit of Newcastle United. On Friday, the Leicester City manager will continue to be bereft of the services of just three first-team players.

James Justin (knee), Wes Morgan (back) and Harvey Barnes (knee) are all believed to have played their last game for the season and are out for the foreseeable future. Rodgers, though, was sweating over the fitness of Jonny Evans and Jamie Vardy, but the Leicester boss has confirmed that the duo are available to take on Newcastle.

Evans should, therefore, take his place in the three-man central defensive unit once again, with Wesley Fofana and Caglar Soyuncu set to be his partners. In goal, there is no looking past Kasper Schmeichel, who will don the captain’s armband for Leicester in Morgan’s absence.

In midfield, Wilfred Ndidi and Youri Tielemans pick themselves as a dynamic partnership, with the duo looking to keep things tight in the middle of the park while also set a quick tempo to the game. Out wide, though, a change is likely, with Ricardo Pereira expected to come in for Luke Thomas, who failed to impress last time out against Southampton.

Pereira’s return means Timothy Castagne will likely move to the left wing-back slot, with Pereira starting on the right flank. James Maddison is a certainty behind the two strikers – Vardy and the in-form Kelechi Iheanacho – with former Newcastle forward Ayoze Perez being an option off the bench. 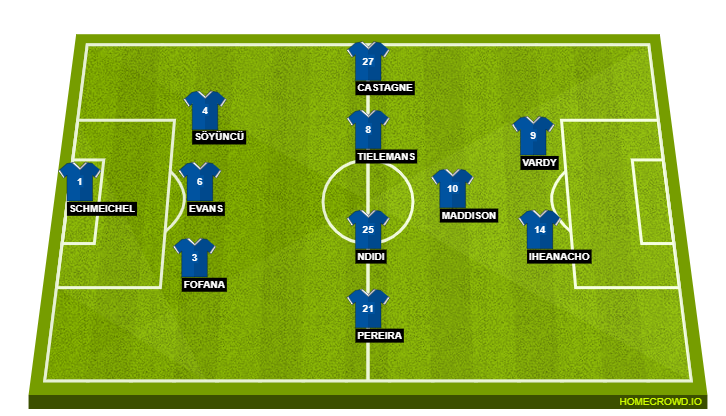 Unlike his counterpart in the Leicester City dugout, Steve Bruce has a brand new roster issue to deal with ahead of the trip to the King Power Stadium. On Friday, the Newcastle United boss will have to make do without as many as five first-team players.

The likes of Karl Darlow (knee), Jamaal Lascelles (foot), Elliot Anderson (hip) and Ryan Fraser (groin) were already on the sidelines, with the quartet now being joined by Fabian Schar, whose suspension is confirmed after Newcastle’s unsuccessful appeal against his red card against Arsenal last week.

Speaking of last week’s game, Joe Willock is once again available to feature after missing out versus his parent club. However, the English midfielder, who Newcastle are keen on signing permanently, is likely to start on the bench and become an impact substitute later in the game.

In his stead, Sean Longstaff should start alongside Jonjo Shelvey in the middle of the park, with Miguel Almiron providing the creative impetus and largely taking up advanced positions on the pitch. The strike partnership ought to be formed by Callum Wilson and Allan Saint-Maximin, who will often drift wide and then aim to take on the Leicester defenders with pace.

The width, though, will largely be provided by the two wing-backs – Jacob Murphy and Matt Ritchie – who have been in fine touch in recent weeks. At the back, Schar’s suspension means Federico Fernandez, Ciaran Clark and Paul Dummett will once again form the three-man central defensive unit, with Martin Dubravka taking station between the sticks. 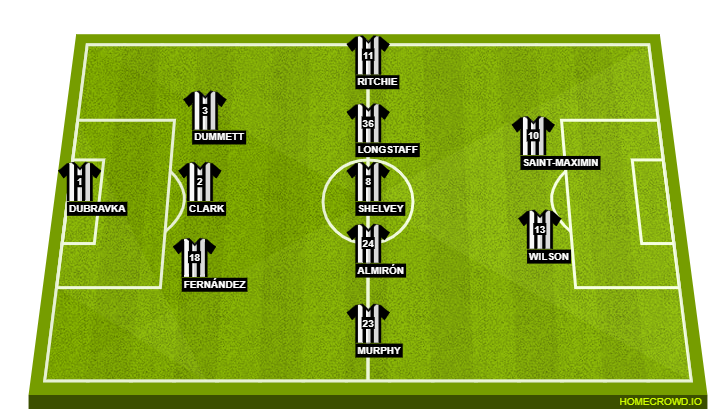 It has been a difficult return to action for James Maddison, who is yet to rediscover his best after recovering from a hip injury. Brendan Rodgers has alluded towards the same, saying the English international needs more game-time in order get his peak sharpness back. Well, then what better way to do so than one of Maddison’s favourite opponents.

So, after an indifferent outing last week against Southampton, Maddison will be eager to continue his fine run versus Newcastle United, having found the back of the net in each of his last three outings against them. More importantly, he will be aiming to rediscover his creative swagger, which in turn will help a lacklustre Jamie Vardy as well. An important fixture ahead of the FA Cup final.

This is another one of those potential banana skin fixtures for Leicester City at this late a stage in the season. Newcastle United have improved in recent weeks and will definitely pose a threat to the hosts, but the Magpies’ own frailties at the back will constantly keep them on the back-foot.

With Kelechi Iheanacho going from strength to strength and James Maddison making them his bunny, Newcastle could be in for a difficult outing. With that in mind, The Hard Tackle predicts a 3-1 win for Brendan Rodgers & co. in a result that will take them a step closer to clinching a top four finish.