Barcelona will be eager to keep pace with La Liga leaders Atletico Madrid when they take on Valencia at the Mestalla on Sunday.

The 2020/21 season is fast approaching its end and the La Liga title race has never been wide open. With Atletico Madrid, Real Madrid and Barcelona all slipping up this past week, Sevilla now have a glimmer of hope to clinch a shock triumph. On Sunday, Barcelona will have a chance to get their title push back on track when they lock horns with Valencia at the Mestalla.

Valencia have endured a tumultuous 2020/21 campaign, having continued to be marred by issues off the field. Los Che are highly likely to miss out on a top half finish, seeing as they are currently 14th and perilously close to the relegation zone. Their recent form has been quite atrocious as well, with Javi Gracia & co. failing to win their last five games in La Liga.

Barcelona, on the other hand, have largely been on a tear in domestic football since the turn of the year. Having clinched the Copa del Rey title last month, Ronald Koeman’s men have closed in on leaders Atletico Madrid in La Liga as well. However, two losses in their last four games has meant that the Blaugrana must win each of their remaining games to stand a chance of lifting the title.

The reverse fixture, played at Camp Nou back in December, saw Barcelona come from a goal down to play out a 2-2 draw with Valencia. Ahead of the latest meeting between the two sides, The Hard Tackle takes a closer look at the encounter.

🎙 Javi Gracia: "We need to face each game aware of the importance of every point" ➡️ https://t.co/rKQ8B86gk2#JuntsAnemAMUNT #PeopleVCF pic.twitter.com/xCMhJIYCCh

Javi Gracia does not have any fresh injury concerns hampering his preparations ahead of the visit of Barcelona. In fact, on Sunday, the Valencia manager will be able to boast of a full-strength squad, with Jasper Cillessen and Thierry Correia deemed to fit enough to be involved.

Correia ought to start as the right-back for the hosts, with Jose Gaya, who has been linked with Barcelona lately, taking his customary place on the left flank. At the heart of the Valencia defence, Gabriel Paulista ought to pair up with Hugo Guillamon, with Jaume Domenech taking his place in goal.

Up ahead in midfield, the onus will be on Carlos Soler to not just shore things up but also look to provide the creative impetus from central areas. Soler will receive defensive support form Uros Racic, with Daniel Wass and Denis Cheryshev being the two wide men.

Finally, the strike partnership for Valencia ought to feature Maxi Gomez alongside Goncalo Guedes, both of whom will need to step up inside the Barcelona box and look to pounce on Gerard Pique’s lack of pace. Kang-in Lee, Patrick Cutrone and Kevin Gameiro will be the other attacking options at Gracia’s disposal. 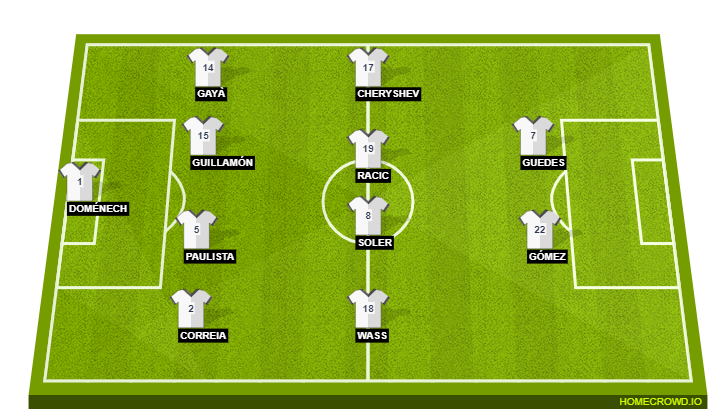 Unlike his counterpart in the Valencia dugout, Ronald Koeman does have a few players out on the sidelines ahead of the trip to the Mestalla. On Sunday, the Barcelona manager will have to make do without three first-team players, with Ansu Fati, Philippe Coutinho and Martin Braithwaite still on the sidelines and missing out on the travelling squad.

As has been the case almost exclusively in recent games, Koeman ought to line his side up in a 3-5-2 formation, with Marc-Andre ter Stegen a certainty in goal. In front of him, the three-man central defensive unit ought to see a change, with Clement Lenglet likely to come in for Samuel Umtiti to partner Simon Kjaer and captain Alessio Romagnoli at the back.

Up ahead in midfield, Pedri should return to the side after being given a breather earlier this week against Granada. The Spanish prodigy will likely replace Ilaix Moriba, with Sergio Busquets and Frenkie de Jong being his partners. And, along with de Jong, Pedri will provide the creative spark from the middle of the park.

The third and final change should come in the right wing-back slot, where Sergino Dest is certain to replace Sergi Roberto following the Spanish international’s disastrous performance earlier this week against Granada. Jordi Alba picks himself on the left flank while Lionel Messi and Antoine Griezmann are automatic choices in the strike partnership. 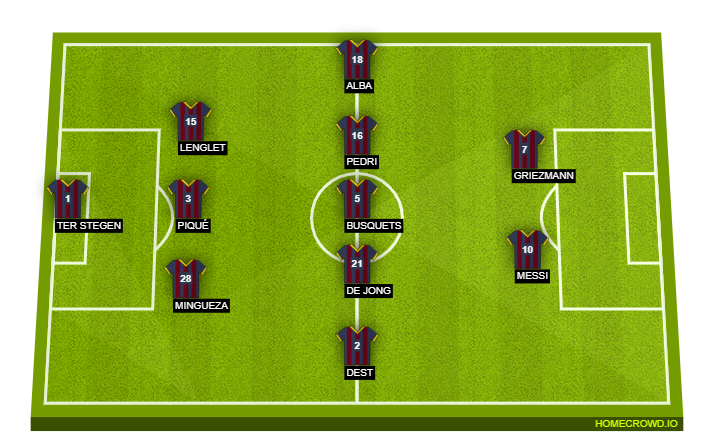 The selection in the Player to Watch section in this game has a lot to do with the long-term future of Barcelona than immediate. However, in the here and now, Sergino Dest now has the chance to nail down his spot in the side for good, following a dreadful showing by Sergi Roberto last time out.

The young defender has himself been blowing hot and cold lately and he will want to prove that he has what it takes to be the long-term solution for Barcelona. It all starts with the tricky fixture against Valencia, a game in which he will be put to the sword at times, but will also be presented with the opportunity to send in some dangerous deliveries. A big game beckons.

The scoreline we have predicted might indicate a straightforward evening for Barcelona, but it will be anything but. Valencia are in the middle of a solid home run in La Liga while the Blaugrana have failed to win any of their last three games at the Mestalla.

However, with Antoine Griezmann constantly improving and Lionel Messi being in excellent touch, Barcelona should have more than enough quality to get past Valencia with a couple of goals to boot. With that in mind, The Hard Tackle predicts a 2-0 win for Ronald Koeman & co.