Barcelona will be hoping to become the new La Liga table toppers when they welcome Granada to Camp Nou on Thursday.

The 2020/21 season is approaching its end, but there is still a lot of business to be conducted all across Europe in the climactic period of the campaign. In La Liga, Barcelona will have the chance to scale the top of the summit when they play hosts to Granada at Camp Nou on Thursday evening.

Barcelona have put a sluggish start to the season well behind them and have been playing some of the best football in Europe under the tutelage of Ronald Koeman. In fact, the Blaugrana have lost just one game since mid-December, with that sole defeat coming earlier this month in El Clasico against Real Madrid. This past weekend, Barcelona beat Villarreal 2-1.

Granada, on the other hand, have once again fared reasonably well in La Liga, although qualifying for the UEFA Europa League for a second successive season seems like a tricky prospect. The Nazaries have also not made the best of preparations for this midweek fixture, having been beaten 2-1 by Sevilla last time out.

This is the third instance of a clash between Barcelona and Granada this season, with the Ronald Koeman & co. winning both the fixtures – 4-0 in La Liga back in January and 5-3 in Copa del Rey in February. Ahead of the latest meeting between the two sides, The Hard Tackle takes a closer look at the encounter.

Ronald Koeman does not have any fresh injury concerns hampering his preparations ahead of the visit of Granada. On Thursday, the Barcelona manager will be bereft of the services of three first-team players.

Philippe Coutinho (knee), Martin Braithwaite (ankle) and Ansu Fati (knee) continue to remain on the sidelines and will play no part against Granada. However, Koeman has more than enough cover in his squad to make up for the absence of the aforementioned trio.

As has been the case in recent games, Barcelona should line up in a 3-5-2 formation in front of Marc-Andre ter Stegen, who is the undisputed choice in goal. The back-three is unlikely to be tinkered with either, with Oscar Mingueza, Gerard Pique and Clement Lenglet keeping hold of their places, as Ronald Araujo misses out.

As for the wing-back slots, Sergi Roberto could come in for Sergino Dest, but Jordi Alba is a certain starter on the left flank. In midfield, Koeman has not rotated his troops much, meaning Pedri ought to start alongside Sergio Busquets and Frenkie de Jong even though he has looked in need of a rest.

Finally, Lionel Messi and Antoine Griezmann should once again form the dynamic strike tandem, with Messi often dropping off and Griezmann taking up positions in and around the Granada box. Ousmane Dembele and Francisco Trincao will be the attacking backup options for Barcelona. 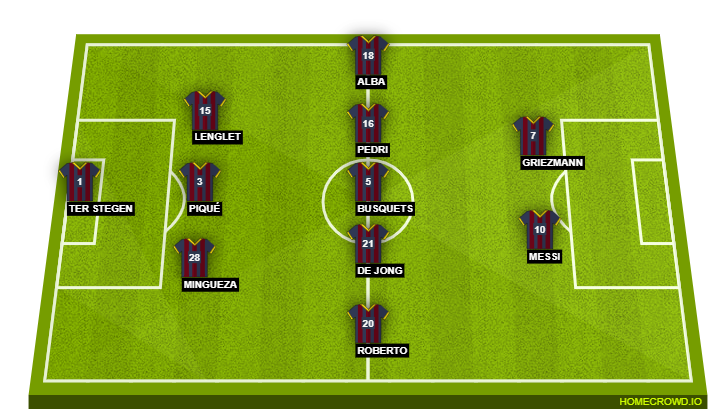 Unlike his counterpart in the Barcelona dugout, Diego Martinez has a number of pressing issues on the team news front ahead of the trip to Camp Nou. On Thursday, the Granada boss could have to make do without as many as six first-team players.

Having made use of a 3-4-2-1 formation last time out against Sevilla, Martinez ought to revert to his favoured 4-2-3-1 setup at Barcelona, with Aaron Escandell lining up between the sticks. Dimitri Folquier and Quini will be the two full-backs for the visitors while German Sanchez and Nehuen Perez will pair up at the heart of the Granada defence.

Up ahead in midfield, Yangel Herrera ought to partner up with Maxime Gonalons in the double pivot, with the duo having the responsibility of keeping a lid on Frenkie de Jong and Lionel Messi. Fede Vico will, meanwhile, reprise the no. 10 role, aiming to provide the creative impetus higher up the pitch.

Darwin Machis and Kenedy are likely to be the two wide men, who will largely look to cut infield and create overloads in the central areas whenever Granada hit Barcelona on the counter. Finally, Luis Suarez will lead the line for Granada on Thursday. 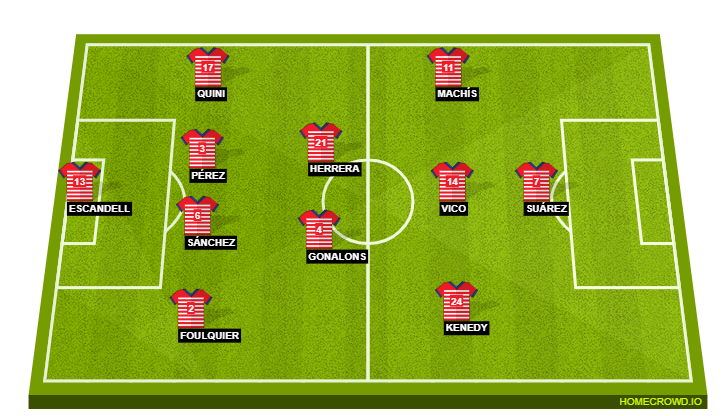 As Barcelona go for the La Liga title charge in the final month of the season, Ronald Koeman will need each of his key players to be at their very best. However, one player who has looked off his top levels in recent weeks is Pedri, who has appeared to be quite jaded at times.

Indeed, with the young Spaniard till in his teens, the sheer number of minutes he has amassed this season was bound to have its effect sooner or later. However, with the finish line in sight, Pedri will need to start stepping up again, seeing as Frenkie de Jong has had to do a lot of heavy lifting of late. A game against a nervy Granada side could be just the way for him to get back to his best. Will Pedri deliver the goods?

When Granada pay a visit to Barcelona at Camp Nou, the game ends in just one result – a win for the Blaugrana. The game on Thursday will not be any different, with Barcelona continuing their run of clean sheets at Camp Nou versus the Nazaries. The Hard Tackle predicts a straightforward 3-0 win for Ronald Koeman & co. in a result that will send them to the top of the table.