Manchester United will be hoping to keep their faint Premier League title hopes alive when they take on Leeds United at Elland Road on Sunday.

Leeds United have been an enigmatic team in the Premier League this season. The Whites have had the tendency to produce some listless performances, but they have also put together some top class performances against the best of teams. This has been best evident in the past fortnight or so, with Marcelo Bielsa & co. getting the better of Manchester City while holding Liverpool to a 1-1 draw.

Manchester United, on the other hand, have continued their upward trajectory under Ole Gunnar Solskjaer this season, once again going into the latter stages of cup competitions while gradually starting to establish themselves as genuine contenders for the Premier League title. Heading into this weekend, the Red Devils are unbeaten in 12 top-flight outings, with their most recent game ending in a 3-1 win over Burnley.

The reverse fixture, played at Old Trafford back in December, saw Manchester United cruise to a 6-2 win over Leeds. Ahead of the latest meeting between the two sides, The Hard Tackle takes a closer look at the Premier League encounter.

🎙️ Marcelo: "Raphinha, we're controlling his evolution on a daily basis, up until now he's not recovered sufficiently to be able to train." pic.twitter.com/09QM6LPJTX

Marcelo Bielsa has a number of pressing roster issues hampering his preparations ahead of the visit of Manchester United. On Sunday, the Leeds United manager will be bereft of the services of as many as four first-team players.

The major absentee for the hosts is Raphinha, who is unlikely to be fit enough to make his way back from a muscle injury that forced him to miss out against Liverpool as well. Apart from the Brazilian forward, who has coincidentally been linked with Manchester United, Rodrigo Moreno and Adam Forshaw are also out injured, while captain Liam Cooper serves the second of his three-match ban.

In Raphinha’s absence, Helder Costa ought to take up the right wing slot, with Jack Harrison certain to start on the left flank. The duo will provide the width higher up the pitch, but the onus of finding them in pockets of spaces will be on Stuart Dallas and Tyler Roberts, both of whom will also try their luck with some long range efforts while providing support to Patrick Bamford.

The key man in midfield, though, will be Kalvin Phillips, who will hope to keep Bruno Fernandes quiet for the most part, which will, in turn, boost Leeds’ chances of causing an upset. As for the defenders, Luke Ayling, Diego Llorente, Pascal Strujik and Ezgjan Alioski will complete the back four, with Illan Meslier picking himself in goal. 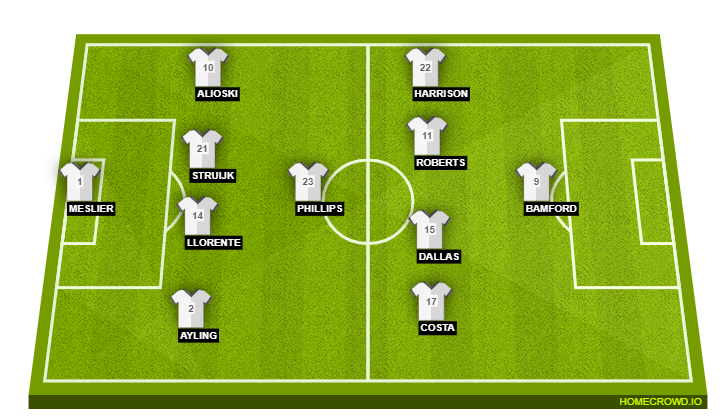 Unlike his counterpart in the Leeds United dugout, Ole Gunnar Solskjaer does not have many injury woes to contend with ahead of the trip to Elland Road. On Sunday, the Manchester United manager is only likely to have to make do without a couple of first-team players, with Phil Jones and Anthony Martial certain to miss out due to their respective knee injuries.

The main concern for Solskjaer heading into the game against Leeds, though, is the fitness of Marcus Rashford, who continues to struggle with a foot injury. Rashford, though, is likely to make himself available, with a start on the left flank likely.

On the right wing, Mason Greenwood is a certainty, with Edinson Cavani expected to lead the line for Manchester United. Bruno Fernandes, who has suffered a dip in form in recent weeks, will hope to pull the string effortlessly around the Leeds box, with Paul Pogba providing creative support. Pogba will start in the midfield double pivot, where he should have Scott McTominay for company.

The defensive line, though, ought to remain unchanged, with Luke Shaw once again playing a key role on both ends of the pitch. Aaron Wan-Bissaka is an automatic pick as the right-back, with Harry Maguire and Victor Lindelof pairing up at the heart of the Manchester United defence, while Dean Henderson ought to be favoured ahead of David de Gea in goal once again. 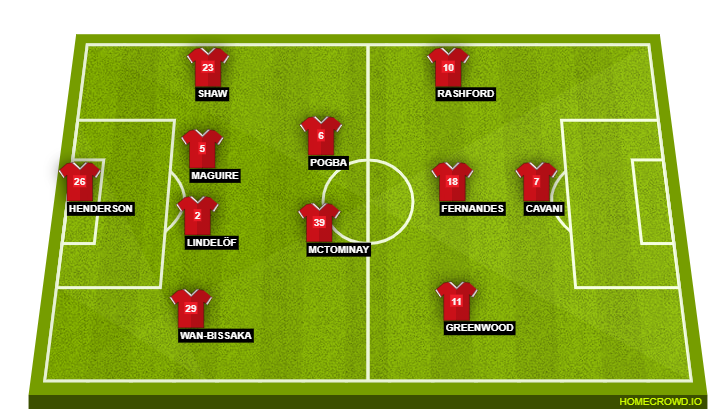 The man in form as far as Manchester United are concerned. After a sluggish start to the season, question marks were raised over his credibility. However, Ole Gunnar Solskjaer has managed the teenage prodigy quite well over the course of the season and the proof is surely in the pudding, with Greenwood scoring in each of the last three league games.

Greenwood’s form bodes well for Manchester United in general as well, especially at a time when Bruno Fernandes has been a bit indifferent and showing signs of fatigue. With Leeds United likely to crowd out the Manchester United talisman, the output of Greenwood from the right flank will surely derive the outcome of the game. Another important outing beckons.

Leeds United seem to have come a long way since their last meeting with Manchester United. Yes, their defence is still susceptible, but Marcelo Bielsa has shown that he has no qualms about setting his team up to absorb the pressure if the situation demands such an outlook, as was evident in the games against Manchester City and Liverpool.

However, in Mason Greenwood, Manchester United have the X-Factor to make a difference against a solid opposition. The English forward should indeed deliver the goods, which will, in turn, earn all three points for Manchester United. The Hard Tackle predicts a closely contested affair that should end in a 2-1 win for Solskjaer & co.