Leicester City will aim to consolidate third place in the Premier League when they welcome West Bromwich Albion to the King Power Stadium on Thursday.

The fallout from the ill-fated European Super League might still be taking centre-stage as far as the headlines are concerned, but on Thursday, two Premier League clubs who had no relation to the competition will lock horns, when Leicester City play hosts to West Bromwich Albion at the King Power Stadium.

Leicester City are starting to see the demons of last season resurface, with the Foxes beginning to slip-up during the run-in once again. Brendan Rodgers & co. have failed to win four of their last six Premier League games, which has not only seen them lose ground to Manchester United in second, but also enabled top four rivals, Chelsea and Liverpool to catch up.

Having said that, Leicester are likely to go into the game against West Bromwich Albion brimming with confidence following their 1-0 win over Southampton on the weekend, which sent them to the FA Cup final. Speaking of West Brom, the Baggies seem to have turned their form around in the past week or so, and how.

Sam Allardyce’s men remain second from bottom in the Premier League, with 17th-placed Burnley still quite a bit ahead of them (nine points, to be precise). However, a late resurgence could well be on the cards, considering West Brom have beaten Chelsea and Southampton in their last two games – games that have seen them score an impressive eight goals.

The reverse fixture, played on the opening weekend of the season at the Hawthorns, saw Leicester cruise to a 3-0 win over West Brom, thanks to a second half blitzkrieg. Ahead of the latest meeting between the two sides, The Hard Tackle takes a closer look at the encounter.

Looking ahead to #LeiWba ⚽️

"It’ll be a very dangerous game for us. Sam (Allardyce) will have been pleased coming out of the (transfer) window, getting the players he wants. He sets them up very well and they showed that against Southampton and Chelsea." pic.twitter.com/u5ENIw6Cyc

Brendan Rodgers does not have any fresh injury concerns hampering his preparations ahead of the visit of West Bromwich Albion. On Thursday, the Leicester City manager will be bereft of the services of three first-team players.

The major absentee for the Foxes is Harvey Barnes, who continues to recover from a knee injury. In addition to the English winger, Rodgers is also missing James Justin (knee) and Wes Morgan (back) from his squad ahead of his side’s latest fixture.

However, Ricardo Pereira could be available after recovering from a calf injury that he picked up in the FA Cup semi-final against Southampton. Rodgers did speak about the Portuguese full-back during his pre-match press conference, iterating that he is easing the defender back into the thick of the action.

With that in mind, it is likely that Marc Albrighton will start as the right wing-back in the 3-4-1-2 formation that Leicester will line up in against West Brom. On the left wing, Timothy Castagne is a certainty, while the wing-back duo will flank Wilfred Ndidi and Youri Tielemans.

Ndidi and Tielemans will have a key role to play in the build-up play, with the former also in-charge of winning the second balls. As for Albrighton and Castagne, they will provide the width going into the final third, seeing as Leicester do not have a natural winger in their system.

Speaking of matters in the final third, the in-form Kelechi Iheanacho will once again form the strike partnership alongside Jamie Vardy, with James Maddison playing off of them. At the back, Caglar Soyuncu, Jonny Evans and Wesley Fofana, who has recently been linked with Manchester United, should form the back three that will provide cover to Kasper Schmeichel. 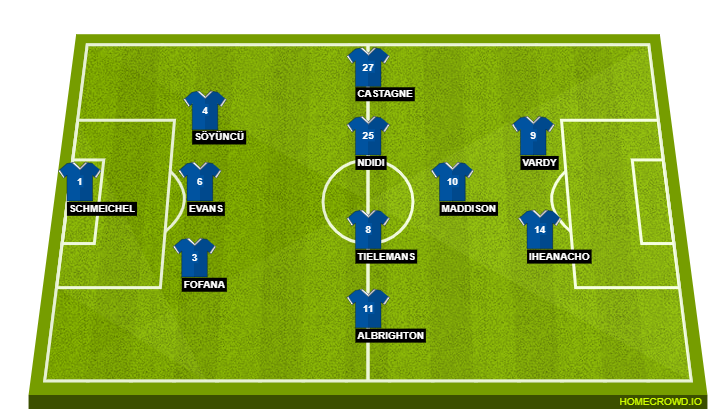 Like his counterpart in the Leicester City dugout, Sam Allardyce is not being bogged down by any new roster issue ahead of the trip to the King Power Stadium. On Thursday, the West Bromwich Albion boss will also have to make do without as many as three first-team players.

Branislav Ivanovic is a long-term absentee due to a thigh injury while Kieran Gibbs and Robert Snodgrass miss out due to knocks. The good news, though, comes in the form of Ainsley Maitland-Niles and Kyle Bartley being available, with the duo having recovered from their respective ankle and calf issues.

Sam Johnstone will take his place between the sticks for West Brom, who will line up in the 4-4-1-1 formation that worked wonders against Southampton last time out. With Sam Allardyce favouring a system with a back four, Dara O’Shea should form the central defensive partnership with Bartley, with Conor Townsend and Darnell Furlong being the two full-backs.

Up ahead in midfield, the onus will be on January arrivals Okay Yokuslu and Maitland-Niles, who has been linked with Leeds United lately, to keep things tight in the middle of the park while denying James Maddison and Youri Tielemans space and time to create the openings.

If they succeed in doing so, the wide duo of Matt Phillips and Callum Robinson will provide the width higher up the pitch, with the latter also looking to cut in an create overloads in the central areas, on a few occasions. The key man for West Brom, though, will be Matheus Pereira, who will hope to fashion the openings, while Mbaye Diagne will lead the line against Leicester. 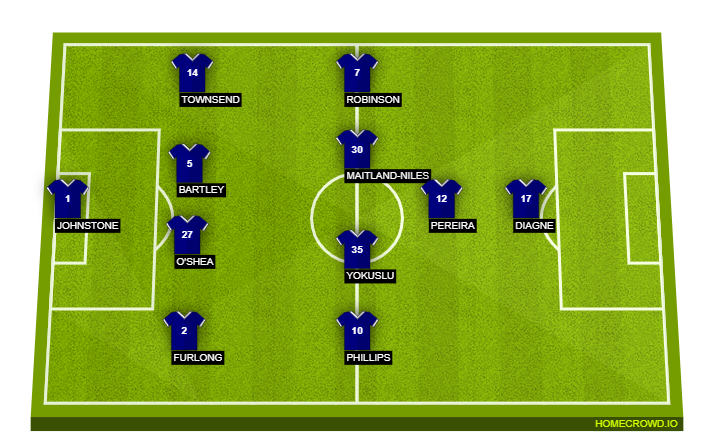 There are two players who are, by far and away, the most in-form players in the Premier League at the moment. One is Jesse Lingard, who has taken the division by storm since joining West Ham United from Manchester United on loan in January while the other is another player who has a history in Manchester, albeit on the blue side.

Kelechi Iheanacho is finally starting to realise the potential the first saw him being lauded as part of the first-team setup at Manchester City. Having since made a slow start to life at Leicester City, the 24-year-old has gone off the rails in recent weeks, scoreing seven goals in his last five outings in the Premier League, as many as in his previous 63 top-flight appearances.

In addition, his eight goals this season is his joint-highest in a single campaign in the competition (also 8 in 2015/16). Suffice to say, his exploits are starting to get noticed, with a number of top clubs after Iheanacho, The urgent matter at hand, though, is the game against West Brom, one that Leicester absolutely need to win. And, Iheanacho’s output will go a long way in determining the final result.

A few weeks ago, this game would have been branded as a guaranteed win for Leicester City. But, such is the beauty of the run-in that any result is possible when two teams take on each other. After all, who could have predicted West Bromwich Albion beating Chelsea, that too by a score of 5-2.

Leicester City, too, are starting to falter again, thereby making Thursday’s encounter a potential banana skin affair. However, the form of Kelechi Iheanacho means the Foxes should have just about enough quality to grab all three points here. With that in mind, The Hard Tackle predicts a 2-1 win for Brendan Rodgers & co.