Inter Milan will be hoping to take a step closer to winning the Serie A title when they take on Spezia at Stadio Alberto Picco on Wednesday.

The action is starting to come at a breakneck pace during the run-in of the 2020/21 season and in Italy, Matchday 32 is underway. League leaders Inter Milan will be among those closing out the action on Wednesday night, when they travel to Stadio Alberto Picco to lock horns with Spezia.

Spezia have held their own to a great extent in their maiden campaign in Serie A. While the Aquilotti have lost 15 of their 31 games till date this season, they are looking primed to stave off relegation, having amassed 32 points to sit 14th on the table, with 18th-placed Cagliari seven points adrift. Heading into the midweek fixture, though, Vincenzo Italiano & co. are coming off of a 4-1 thrashing at the hands of Bologna.

Inter Milan, on the other hand, were chasing AC Milan for the longest time, but have turned the screws ever so well since the turn of the year. With the Rossoneri slipping up week after week, Antonio Conte’s men have hardly put a foot wrong, which has helped them establish a handy lead atop the standings. Their 1-1 draw with Napoli this past weekend, though, reduced the gap to AC Milan to 9 points.

The reverse fixture, played at San Siro back in December, saw Inter Milan eke out a narrow 2-1 win over Spezia, with Achraf Hakimi and Romelu Lukaku on target for the Nerazzurri. Ahead of the latest meeting between the two sides, The Hard Tackle takes a closer look at the encounter.

Vincenzo Italiano does not have any pressing injury concerns to deal with ahead of the visit of Inter Milan. On Wednesday, the Spezia manager will be bereft of the services of just two key first-team players, with Federico Mattiello and Riccardo Saponara missing out for the hosts.

Ivan Provedel ought to get the nod over Jeroen Zoet in goal for Spezia, who will likely be set up in a 4-3-3 formation. At the heart of their defence, Julian Chabot should pair up with Ardian Ismajli, with Salva Ferrer and Riccardo Marchizza taking their places in the full-back positions.

Up ahead in midfield, the onus will be on Matteo Ricci to keep things tight in the middle of the park and negate the influence of Nicolo Barella. Nahuel Estevez and Giulio Maggiore will provide defensive support to Ricci, with the duo also being tasked with providing the creative impetus from the middle.

Finally, in attack, Roberto Piccoli is expected to lead the line for Spezia against Inter Milan, with Diego Farias and Emmanuel Gyasi being the two wide men for the hosts. 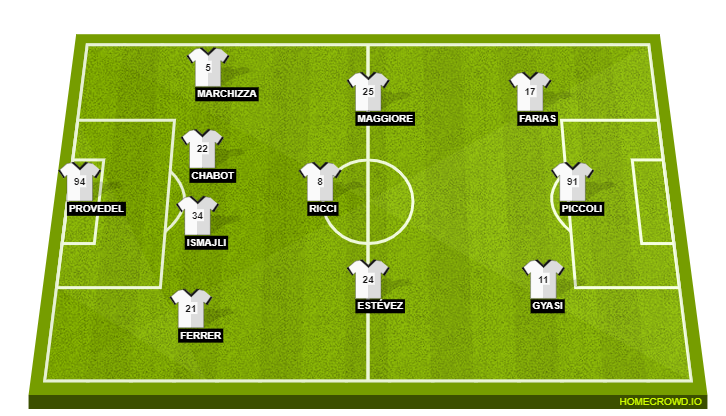 Like his counterpart in the Spezia dugout, Antonio Conte does not have any fresh roster issues hampering his preparations ahead of the trip to Stadio Alberto Picco. On Wednesday, the Inter Milan manager will continue to have to make do without two first-team players.

Aleksandar Kolarov (muscle injury) and Arturo Vidal (knee) remain the only absentees for Inter Milan heading into their midweek fixture. Meanwhile, considering the games are coming thick and fast, it looks likely that Conte could make a couple of alterations to his starting lineup.

Alexis Sanchez is one of the players expected to benefit from the rare rotation, coming in for Lautaro Martinez to partner Romelu Lukaku in the final third. The only other change should see Ivan Perisic start in place of Matteo Darmian in the left wing-back slot. On the opposite flank, there is no looking past Achraf Hakimi.

The midfielders, as always, will hold the key for Inter Milan, with Marcelo Brozovic holding the fort in the middle of the park, while Nicolo Barella and Christian Eriksen will provide the forward thrust. As for the defenders, Stefan de Vrij, Milan Skriniar and Alessandro Bastoni pick themselves, with captain Samir Handanovic a guaranteed starter between the sticks. 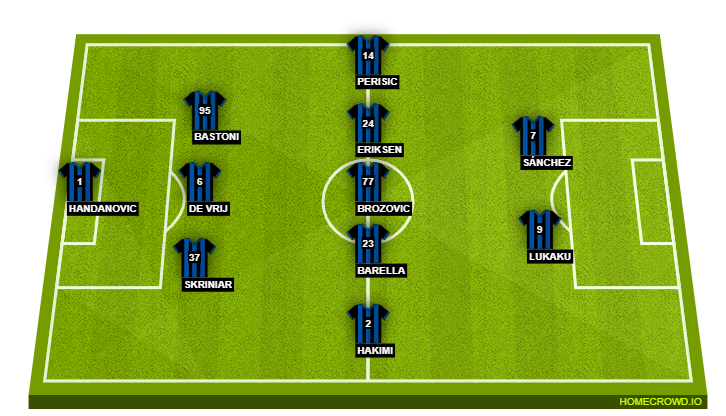 After what was a promising season on loan in 2019/20, Alexis Sanchez was expected to finally kick on, having ended his infamous stint with Manchester United. However, the Chilean has been left to be a bit-part player for Inter Milan this season, failing to usurp either Romelu Lukaku or Lautaro Martinez at any stage of the season.

On Wednesday, Sanchez could get a rare chance to impress and it will be imperative for him to take this opportunity with both hands. With the season reaching its conclusion in a few weeks, this is the chance for Sanchez to shine and make a case for himself before Antonio Conte lays down his plans for the 2021/22 campaign.

Inter Milan might be cruising towards the title, but they are doing it the ugly way. Their struggles should continue against Spezia on Wednesday, with the hosts making it difficult for the Nerazzurri to conjure up too many openings. In the end, though, the gulf in quality will be telling, with Romelu Lukaku likely to be a major factor in earning his side a win. The Hard Tackle predicts a 2-0 victory for Antonio Conte & co.