Manchester City will hope to get back to winning ways when they take on Aston Villa at Villa Park on Wednesday.

The European Super League might be over before it even started, but there are matters to be taken care of in the Premier League. Table toppers Manchester City will be in action on Wednesday night, when they travel to Villa Park to lock horns with Aston Villa.

Aston Villa have put the horrors of the 2019/20 season behind them, having steered well clear off the relegation zone right from the early stages of the ongoing campaign. However, in recent weeks, Dean Smith & co. have tailed off considerably, winning just two of their last eight games, in a run that has unsurprisingly coincided with Jack Grealish’s absence with a shin injury.

Manchester City, on the other hand, appear to be the champions in waiting despite slipping up a little in the past month. Their most recent fixture in the Premier League ended in a shock 2-1 defeat to Leeds United, while their quadruple hopes were dashed this past weekend after being ousted from the FA Cup by Chelsea.

The headlines pertaining to Manchester City heading into their next game, though, have all centred around the controversial European Super League, with the Citizens now pulling out of the infamous competition. This comes in the wake of some damning comments by manager Pep Guardiola.

The reverse fixture, played at the Etihad Stadium back in January, saw Manchester City run out 2-0 winners over Aston Villa, with Bernardo Silva and Ilkay Gundogan on target for the Citizens. Ahead of the latest meeting between the two sides, The Hard Tackle takes a closer look at the encounter.

Smith on Manchester City: "We have to work extremely hard to match them. They're very good with and without the football."#AVLMCI pic.twitter.com/LklD84mXBy

The major concern on the team news front pertaining to Aston Villa remains the absence of Jack Grealish. Apart from the English international, Morgan Sanson, Trezeguet and Wesley are all on the sidelines as well due to their respective knee injuries.

However, the absence of the Aston Villa captain is more telling than anyone else’s, considering the hosts have lost not only their creative spark but also one of the chief goal threats. Grealish will likely be sorely missed once again when Manchester City visit Villa Park.

In his stead, Anwar El Ghazi is a certainty on the left wing, with Bertrard Traore picking himself on the right flank. Ollie Watkins, linked with Liverpool this week, will lead the line for Aston Villa against Manchester City, hoping to score in three successive games for the first time this season.

Ross Barkley is expected to miss out again, with his time at Aston Villa coming to an end on a bit of a whimper. With Barkley unlikely to be picked, a midfield trio comprising of John McGinn, Douglas Luiz and Marvelous Nakamba automatically select themselves.

The onus, though, will be on the defenders to keep a formidable Manchester City attack at bay, with Tyrone Mings donning the leadership hat at the back. Mings will have Ezri Konsa for company at the heart of the Aston Villa defence, Out wide, Matt Targett and Matty Cash are guaranteed starters as is Emiliano Martinez in goal. 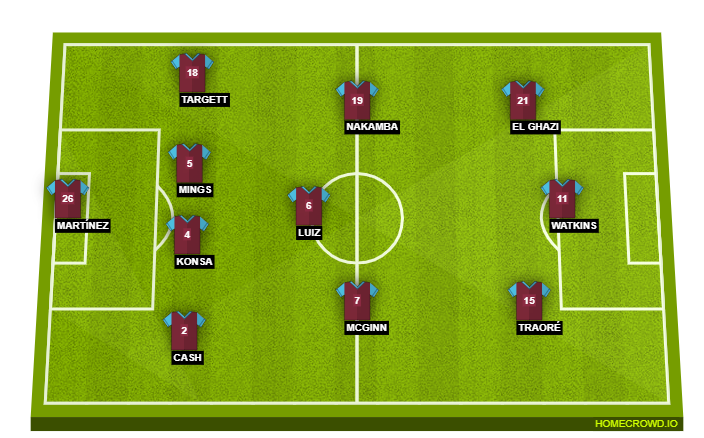 Unlike his counterpart in the Aston Villa dugout, Pep Guardiola has one fresh injury concern hampering his preparations ahead of the trip to Villa Park. Like Dean Smith, though, the Manchester City manager is missing one of most important players.

Kevin De Bruyne is unlikely to take part in the game against Aston Villa this midweek after picking up an injury on his right foot and ankle. With the focus being on getting prepared for the Carabao Cup final against Tottenham Hotspur later this week, De Bruyne will be preserved in all likelihood. The only other absentee for Manchester City is Sergio Aguero.

In Aguero’s absence, Gabriel Jesus ought to spearhead the Manchester City attack, with Phil Foden and Riyad Mahrez being the two wide men for the visitors. Meanwhile, with De Bruyne unavailable, Bernardo Silva ought to get the nod to feature in midfield, where he will likely have Rodri and Ilkay Gundogan for company.

As for the defence, Ruben Dias and John Stones should pair up at the heart of the Manchester City backline, with Kyle Walker a certainty in the right-back berth. On the left flank, Oleksandr Zinchenko is expected to get the nod, with the Ukrainian international impressing in recent outings. Finally, there is no looking past Ederson Moraes between the sticks. 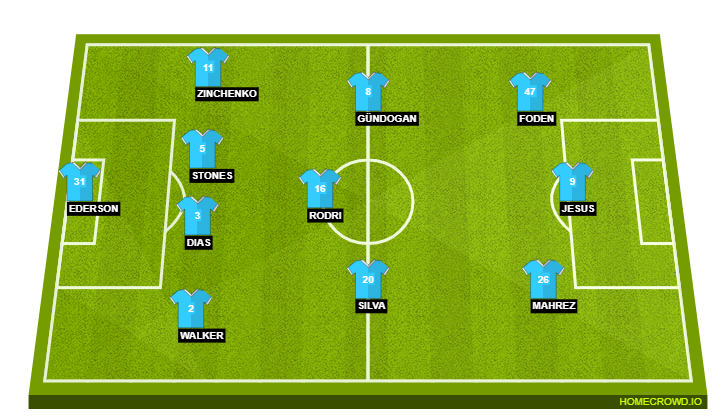 Much of what Manchester City produce is usually attributed to Kevin De Bruyne and his excellence in the middle of the park. However, with the Belgian playmaker unavailable to take on Aston Villa this weekend, Bernardo Silva will have the onus on him to take on the creative mantle.

The Portuguese international, while being supremely talented, has flattered to deceive at times over the course of his stint with Manchester City. The game against Aston Villa on Wednesday, though, could be his chance to set the record straight, as the Citizens aim for a quick turnaround after being beaten twice in their last three games. A big game beckons for Silva.

There are no two ways about it. Aston Villa are just not the same without Jack Grealish and unlike Leeds United nearly 10 days ago, the hosts do not quite have the cutting edge to get the better of Manchester City. Meanwhile, despite missing Kevin De Bruyne, City have enough quality to find the back of the net at least once. With that being said, The Hard Tackle predicts a 2-0 win for Pep Guardiola & co.