Liverpool will be eager to pounce on West Ham United’s slip-up when they take on Leeds United at Elland Road on Monday.

The elongated Gameweek 32 of the 2020/21 Premier League season continues past the weekend, with defending champions Liverpool set to take the field on Monday. The Reds will travel to West Yorkshire, where they will lock horns with Leeds United at Elland Road, hoping to return to the top four.

Leeds United have been the maverick team in the Premier League this season, carrying bundles of threat in the attacking phases of the game while constantly looking suspect at the back. However, it looks like the Whites are starting to turn a new leaf in the Premier League this term, after having produced a disciplined performance to beat Manchester City 2-1 last weekend.

Liverpool, on the other hand, are starting to show signs of recovery as the run-in period begins. Having been nothing short of dreadful upon the turn of the year, the Reds, whose title defence has unraveled spectacularly, Jurgen Klopp & co. have won each of their last three games in the top-flight to make a late tilt for the top four.

The reverse fixture, played at Anfield on the opening weekend of the season, was a captivating affair that saw Liverpool eke out a narrow 4-3 win over Leeds United. Ahead of the latest meeting between the two sides, The Hard Tackle takes a closer look at the encounter.

Marcelo Bielsa has greeted a mixed bag of updates on the team news front ahead of the visit of Liverpool. On Monday, the Leeds United manager could be bereft of the services of as many as four first-team players due to injury or suspension.

The big concern for Bielsa heading into the game pertains to Raphinha, who is struggling to recover from a thigh injury to make himself available for the game on Monday. A significant absentee for Leeds, meanwhile, is captain Liam Cooper, who serves the first of his three-match ban that begins against Liverpool following his dismissal versus Manchester City last week.

Two other players are certain to miss out, with Adam Forshaw (hip) and Rodrigo (knock) also on the sidelines. As for Raphinha, it is likely that he will make the starting lineup, with Helder Costa on standby in case he fails to be fit enough to start against Liverpool.

Speaking of Costa, he should make way for Jack Harrison on the left flank, with the Manchester City loanee available once again after being ineligible to face his parent club last week. Patrick Bamford will continue to lead the line for Leeds against Liverpool, with Stuart Dallas and Tyler Roberts playing off of him.

The key man for Leeds will be Kalvin Phillips, who will hope to keep things tight in the middle of the park while setting a quick tempo to the game. Meanwhile, at the heart of the Leeds defence, Robin Koch ought to replace Cooper, with Diego Llorente being his partner. Ezgjan Alioski and Luke Ayling will be the two full-backs, with Illan Meslier taking his place in goal. 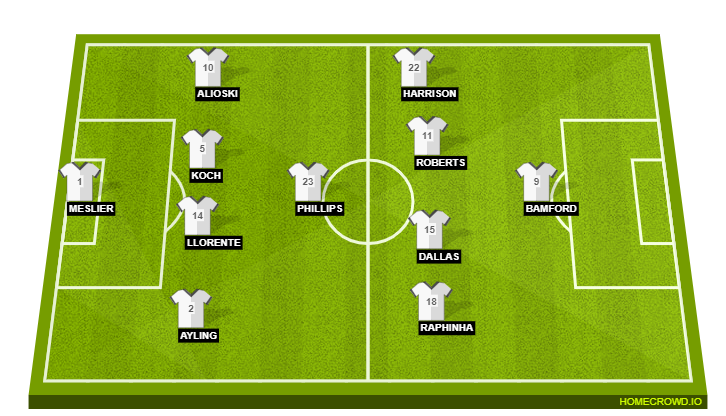 Unlike his counterpart in the Leeds United dugout, Jurgen Klopp does not have any fresh roster issue hampering his preparations ahead of the trip to Elland Road. On Monday, the Liverpool boss will continue to have to make do without six first-team players.

The likes of Virgil van Dijk (knee), Joel Matip (ankle), Joe Gomez (knee) and Jordan Henderson (hip) are long-term absentees. In addition, Divock Origi and Caoimhin Kelleher continue to recover from their respective injuries and are set to miss out again.

Not a lot of alterations are expected from Klopp, particularly at the back, with Alisson Becker the undisputed choice in goal. Trent Alexander-Arnold, Andrew Robertson, Nathaniel Phillips and Ozan Kabak are all likely to retain their spots in the Liverpool defence as well, with the quartet improving constantly.

The first significant change ought to come in midfield, where Thiago Alcantara should be recalled after being benched in each of the last three games. Thiago will come in for James Milner, with Fabinho and Georginio Wijnaldum continuing in the middle of the park.

Finally, in attack, Klopp will continue to grapple with the decision of picking between Mohamed Salah, Roberto Firmino, Sadio Mane and Diogo Jota. Jota is likely to miss out again, with Mane getting the nod over him, while Firmino and Salah are automatic picks. 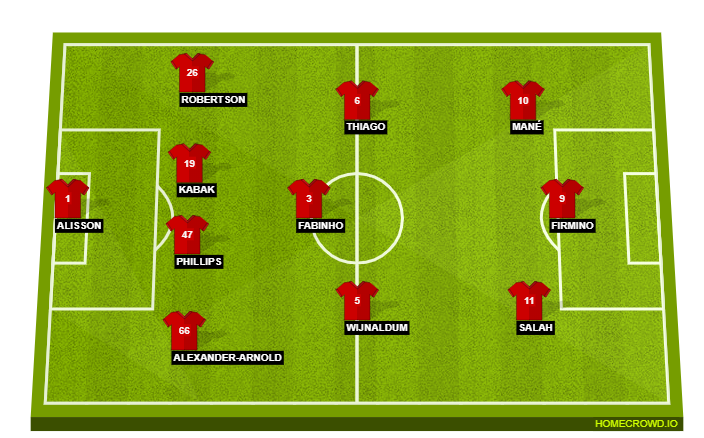 In what had already been a difficult maiden campaign with Liverpool for Thiago Alcantara, his predicament has been worsened by Jurgen Klopp in recent weeks. Omitted from the Liverpool starting lineup in each of the last three games, Thiago has been relegated to the bench, much to his frustration.

As the season approaches its end, it is now or never for the Spanish international, who has to turn things around swiftly, especially with a place in his national side also on the line. A big game for Thiago, against a team that could offer him some joy in the middle of the park.

Last week, Leeds United showed that they have what it takes to sit back and soak up the pressure, before hitting teams on the counter. It should be more of the same against Liverpool, but the Reds should find a way past the Whites backline, with Mohamed Salah, in particular, likely to have a field day on the pitch.

Having been ousted from the UEFA Champions League, a top four finish remains the only option for Liverpool to qualify for the competition next season. And, in the wake of West Ham United’s shock defeat to Newcastle United, the Reds should pounce. In the end, a closely-contested affair should ensue, but with Liverpool taking all three points with a 2-1 win over Leeds.