Juventus will be desperate to consolidate their place inside the top four when they take on Atalanta at the Gewiss Stadium on Sunday.

The Serie A is perhaps at its most important juncture at the moment, with Matchday 31 of the 2020/21 season serving some crucial match-ups. One such fixture will be played at the Gewiss Stadium on Sunday, when Atalanta will play hosts to Juventus, with both sides eager to strengthen their grip over a top four spot.

Atalanta took some time to get going in their 2020/21 Serie A campaign, with controversy involving former captain Alejandro Gomez also proving to be a major distraction. However, since the turn of the year, La Dea are averaging 2.27 points per game, their best rate under Gasperini in the second half of a Serie A campaign. What is not a surprise, though, is the fact that they are the most prolific team in the Italian top-flight.

Juventus, on the other hand, have experienced major teething problems under the tutelage of Andrea Pirlo. While there have been some promising signs with the former Italian international in-charge of the Bianconeri, the reigning Serie A champions have been largely underwhelming in key moments, all of which have meant that they are set to relinquish their long-held grip on the title to Inter Milan.

The reverse fixture, played at the Allianz Stadium back in December, saw Atalanta and Juventus play out a 1-1 draw. Ahead of the latest meeting between the two sides, The Hard Tackle takes a closer look at the encounter.

Gian Piero Gasperini has one fresh roster issue hampering his preparations ahead of the visit of Juventus. On Sunday, the Atalanta manager will be bereft of the services of just two first-team players, but both the squad members are key figures for him.

Hans Hateboer was already on the sidelines due to a foot injury, with the latest absentee being Cristian Romero, on-loan from Juventus, due to a one-match ban accrued after an accumulation of yellow cards. In the absence of Romero, who has recently been linked with a shock Barcelona move, Berat Djimsiti will be recalled to the starting lineup.

Djimsiti will join Jose Luis Palomino, Rafael Toloi and Robin Gosens in the Atalanta defence which will resemble a back four on paper but will transform into a back three during transitions, with Gosens practically being a wing-back. In goal, Pierluigi Gollini is a certainty.

Up ahead in midfield, Marten de Roon and Remo Freuler will be in-charge of keeping things tight and nipping the Juventus attacks in the bud. The duo will have Ruslan Malinovskyi for company in the middle of the park during the defensive phases, with the 27-year-old reprising the right wing-back role during transitions.

As for the attack, Luis Muriel and Duvan Zapata ought to form the strike partnership, with disgruntled striker Josip Ilicic set to miss out. Matteo Pessina will play off of the two in-form strikers, hoping to carve out the openings for the front-men to pounce on. 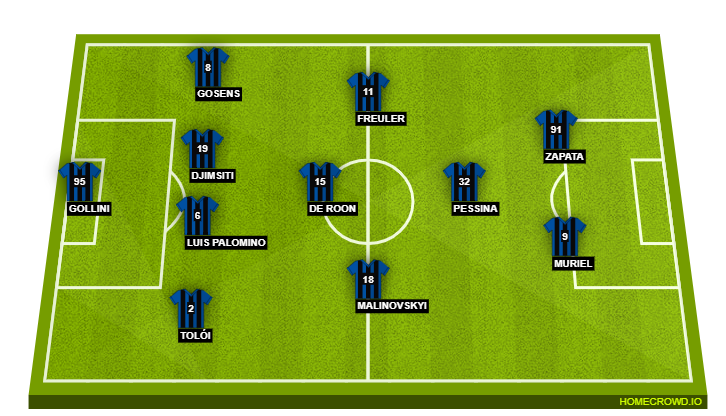 Like his counterpart in the Atalanta dugout, Andrea Pirlo has a fresh concern to deal with ahead of the trip to the Gewiss Stadium. On Sunday, the Juventus manager will have to make do without two first-team players, which includes his single-most important squad member.

Cristiano Ronaldo has been excluded from the travelling squad for the trip to Bergamo after picking up a thigh injury that is only likely to keep him sidelined for a few days. In addition to the Juventus talisman, Federico Bernardeschi is also unavailable after he tested positive for COVID-19.

The key decision will centre around the player who gets picked to replace Ronaldo, with Paulo Dybala likely to get the nod ahead of Dejan Kulusevski. Dybala will have Alvaro Morata as his strike partner, with Kulusevski being an option off the bench.

In midfield, the key player will once again be the in-form Federico Chiesa, who will pose a great deal of threat from the left flank while on the opposite side, Juan Cuadrado is likely to be deployed ahead of Weston McKennie. In the centre of the pitch, Rodrigo Bentancur and Adrien Rabiot, who has been linked with a possible summer exit, will pair up to form a solid double pivot.

Cuadrado’s presence on the right side of the Juventus midfield means Danilo will start as the right-back in a flat back four, with Alex Sandro returning on the left side of the Juventus defence. Meanwhile, Matthijs de Ligt will have Leonardo Bonucci as his partner in the central defensive partnership, with Wojciech Szczesny a guaranteed starter between the sticks. 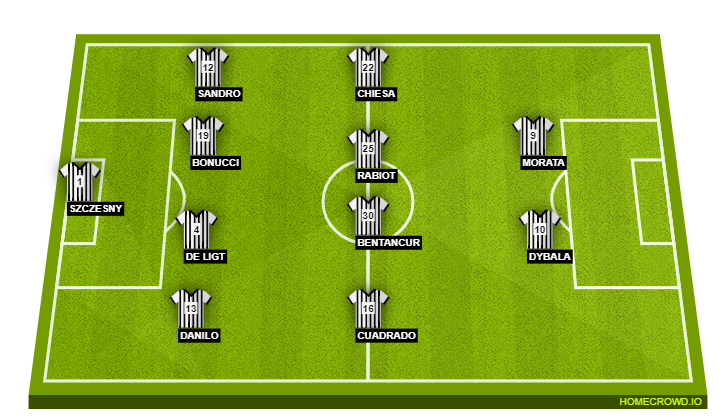 In a team that has blown hot and cold all through the season, one player who has been yearning for a chance after spending a long time on the sidelines is Paulo Dybala. The Argentine international, once a talisman for the Bianconeri, has seen his stock within the squad plummet in the last couple of years and had been battling for his place in the side before injury struck.

Now back to peak fitness, Cristiano Ronaldo’s injury has opened up a window of opportunity for Dybala, at a time when he has been linked with a move to Arsenal, Manchester United and several other clubs. And so, as the season draws to a close, it is make or break time for Dybala if he is to have a long-term future with Juventus. If he fails to deliver the goods, it will soon be time for him to pack his bags.

This should be one closely-contested affair between two sides that will be desperate for a win to cement their place inside the top four. With Napoli facing a daunting test against Inter Milan, this is the perfect opportunity for both Atalanta and Juventus to create some daylight between them and the Partenopei.

However, neither team can afford a loss, as that would also leave them at risk of falling out of the top four if Napoli manage to shock the Serie A leaders. Juventus usually tend to have the upper hand over Atalanta in Serie A, but La Dea are the form team in Serie A.

Furthermore, with Cristiano Ronaldo missing, this is the perfect time for Gian Piero Gasperini & co. to end their dry run versus the Bianconeri. With that in mind, The Hard Tackle predicts a 2-1 win for Atalanta, which puts Juventus in a precarious position in the top four race and Andrea Pirlo under further pressure.