AC Milan will be hoping to consolidate second place on the Serie A table when they welcome Genoa to San Siro on Sunday.

Just eight more rounds of fixtures remain for the 2020/21 Serie A to draw to a close. While Inter Milan seem to be running away with the title, the race for a top four finish is quite exciting and the leaders in that chase will be in action first up on Sunday, when AC Milan play hosts to Genoa at San Siro.

AC Milan have gone from being the pace setters in the first half of the Serie A season to one of the most underwhelming teams since the turn of the year. Their form and fortunes have plummeted so badly that the Rossoneri are not just 11 points behind leaders Inter Milan but are also looking over their shoulders now, with fifth-placed Napoli just four points adrift of them.

Genoa, on the other hand, have endured a roller-coaster of a ride in the ongoing season, having won just 7 of their 30 games till date. The same has been the case under Davide Ballardini, who oversaw 5 wins in his first 8 games upon replacing Rolando Maran but has seen Il Grifone record just the solitary victory in their last 9 outings. Relegation, though, is unlikely, with 18th-placed Cagliari 10 points behind.

The reverse fixture, played at the Luigi Ferraris Stadium back in December, saw AC Milan twice come from a goal down to hold Genoa to a 2-2 draw. Ahead of the latest meeting between the two sides, The Hard Tackle takes a closer look at the encounter.

Zlatan Ibrahimovic is unavailable to take on Genoa. (Photo by Marco Luzzani/Getty Images)

Stefano Pioli has greeted a mixed bag of updates on the team news front ahead of the visit of Genoa. On Sunday, the AC Milan manager will be bereft of the services of just two first-team players due to injury or suspension.

The good news comes in the form of Alessio Romagnoli’s return to training, with the AC Milan captain in contention to feature. The bad news, though, is the unavailability of star striker Zlatan Ibrahimovic, who is suspended after being sent off last time out. The veteran Swede has joined Davide Calabria on the sidelines, although the Italian defender has resumed running this week.

However, the game against Genoa has come too soon for Calabria, meaning Pierre Kalulu could start on the right side of the AC Milan defence, while Theo Hernandez is a certainty on the left flank. As for the central defensive partnership, Romagnoli is likely to miss out, with Simon Kjaer and Fikayo Tomori likely to continue at the heart of the backline.

Up ahead in midfield, Franck Kessie and Ismael Bennacer will have a key role to play if Milan are to grab a key win, with the duo not just being tasked with holding the fort in the middle of the park but also provide efficient ball progression. The creative onus, though, will be on Hakan Calhanoglu in the final third.

The Turkish playmaker will need to carve out the Genoa defence more often than he has been of late, with Ante Rebic and Alexis Saelemaekers providing the forward thrust in the final third. Finally, Rafael Leao will lead the line for Milan in the absence of Ibrahimovic. 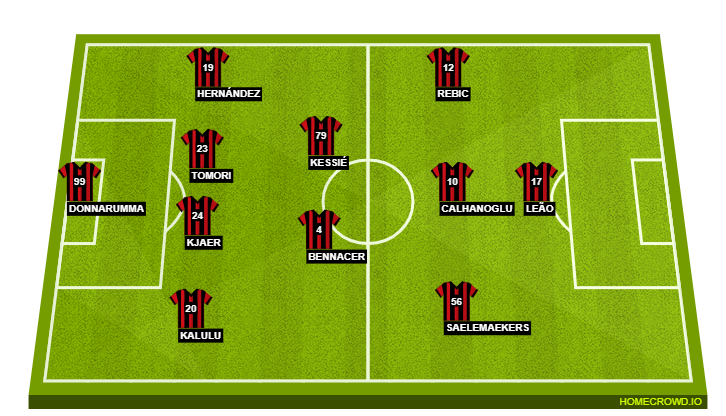 Like his counterpart in the AC Milan dugout, Davide Ballardini has fresh roster issues hampering his preparations ahead of the trip to San Siro. On Sunday, the Genoa manager will have to make do without as many as three first-team players.

As is the case with Stefano Pioli, one of the absentees for Il Grifone is courtesy a suspension, with Domenico Criscito serving a one-match ban due to an accumulation of yellow cards. Meanwhile, Luca Pellegrini and Davide Zappacosta are unavailable due to their respective hamstring injuries.

The absence of Zappacosta means Paolo Ghiglione will start in the left wing-back slot, with Davide Biraschi taking his place as the right wing-back for Genoa. The duo will flank Nicolo Rovella, Miha Zajc and Milan Badelj, with Rovella sitting at the base of the three-man midfield, while Badelj and Zajc will provide defensive support to the 19-year-old and look to push the visitors forward during transitions.

At the back, with Criscito and Pellegrini unavailable, Edoardo Goldaniga is set to get a chance to impress, with Ivan Radovanovic and Andrea Masiello joining him in the three-man central defensive unit. And, on the opposite end of the pitch, Goran Pandev will likely line up alongside Gianluca Scamacca to form the strike partnership. 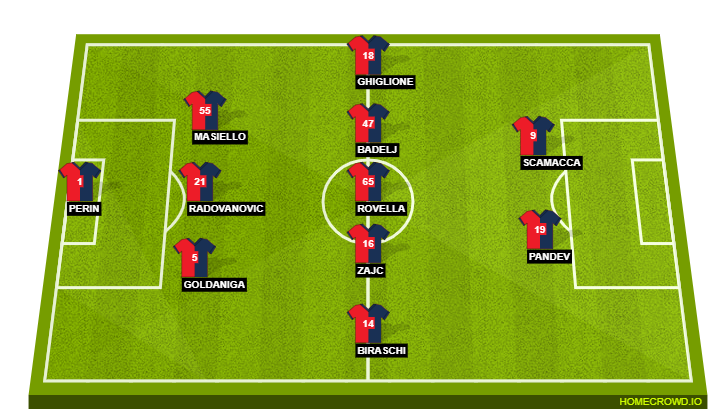 There are no two ways about it. AC Milan really need to be creating more chances in the final third to get back to rediscovering the team that was efficiently getting past most opponents in the first half of the season. Primarily in-charge in the creative department is Hakan Calhanoglu, who has to be pulling his socks up after a bit of a lull lately.

With Zlatan Ibrahimovic unavailable to take on Genoa, Calhanoglu will end up having even more responsibility in the final third. If he fails to rise to the occasion once again, AC Milan could well go on to endure yet another forgettable day on the field. If he does, though, it could be a cruise for the Rossoneri. A big game beckons Calhanoglu and AC Milan.

This might not be a game that troubles AC Milan too much, with the Rossoneri likely to grab an early lead against a Genoa side that will be missing a couple of key players. However, it is unlikely that the hosts will run away with the game, with Genoa getting a late goal to set up an exciting finale to the game. Stefano Pioli & co. should hold on for a narrow 2-1 win, though.