Everton and Tottenham Hotspur will be desperate to keep their fading top four hopes alive when they lock horns at Goodison Park on Friday.

The games continue to come thick and fast all across Europe and in England, Gameweek 32 of the 2021/22 Premier League season will kick off this week. First-up in the latest round of fixtures will be an intriguing match-up that will pit Everton against Tottenham Hotspur at Goodison Park on Friday night.

Everton have made definitive progress under the tutelage of Carlo Ancelotti and for large parts of the ongoing season, it looked like they could make a case for a top four finish. However, the Toffees have been quite inconsistent since the turn of the year, winning just five of their 14 Premier League games, and none of their last four. As a result, the Merseysiders have been sliding down the table and are currently 8th.

Tottenham are pretty much in the same boat as their hosts on Friday, having gone from leading the rest of the Premier League to becoming mere outside contenders for a top four finish. Ever since December, Jose Mourinho & co. have been nothing short of dismal, with Spurs winning just seven of their last 17 in the league, leaving them 7th in the standings, 6 points behind West Ham United in 4th.

Everton and Tottenham have already clashed with each other twice this season, with the Toffees winning both the games so far – 1-0 in the Premier League back in September, and 5-4 in the FA Cup fifth round. Ahead of the latest meeting between the two sides, The Hard Tackle takes a closer look at the encounter.

🔙 | "Available for the game are Pickford, Allan, King and Gomes.

"Next week we will have Calvert-Lewin, Mina, Delph and Bernard [back]."@MrAncelotti on the latest team news ahead of #EVETOT.

Carlo Ancelotti has greeted a mixed bag of updates on the team news front ahead of the visit of Tottenham Hotspur. While his squad’s frustrating injury woes have eased up a fair bit, on Friday, the Everton boss will continue to be bereft of the services of as many as six first-team players.

In some good news, though, the likes of Jordan Pickford, Allan, Andre Gomes and Joshua King are all back at the disposal of Ancelotti, who would be starting to get relieved over the status of the injuries in his squad. Pickford should be recalled to the starting lineup straightaway, with the Englishman taking his place in goal.

In front of Pickford, Everton ought to line up in a 3-4-1-2 formation, whose variants have been used a fair bit lately by Ancelotti.  The back three should see Mason Holgate line up alongside Ben Godfrey and Michael Keane, with the Englishman dropping back into defence due to the absence of Mina.

As for the midfield, the fit-again Allan should return straightaway, with the Brazilian pairing up with Tom Davies in the middle of the park, while Gylfi Sigurdsson will have the freedom to express himself higher up the pitch for the most part. Seamus Coleman and Lucas Digne will be the two wing-backs, with James Rodriguez and Richarlison forming the strike partnership that will have Rodriguez playing off of the Brazilian. 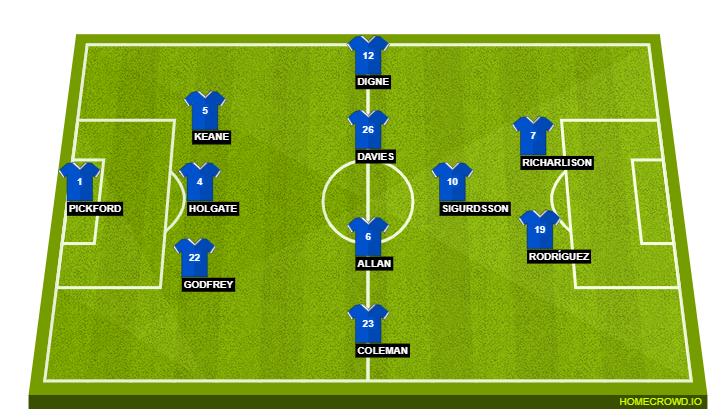 Unlike his counterpart in the Everton dugout, Jose Mourinho does not have several pressing issues hampering his preparations ahead of the trip to Goodison Park. On Friday, the Tottenham Hotspur manager will only have to make do without a couple of first-team players.

Full-backs Ben Davies and Matt Doherty remain on the sidelines, with a return date yet to be set for either player. In their continued absence, Serge Aurier and Sergio Reguilon will retain their places in the side as the full-back pairing.

The duo will flank Toby Alderweireld and Joe Rodon, with the former replacing Eric Dier at the heart of the Tottenham defence following his disastrous showing against Manchester United. In goal, there is no looking past captain Hugo Lloris.

Another change to the starting lineup will see Giovani Lo Celso drop down to the bench, freeing up Tanguy Ndombele to reprise the no. 10 role, which will see him be a sort of an enforcer higher up the pitch. Ndombele’s vacated spot in the double pivot will be occupied by Moussa Sissoko, who pairs up with Pierre-Emile Hojbjerg in the middle of the park.

As for the attack, Harry Kane and Son Heung-min are certainties for Tottenham in most games, with the star forward pairing likely to be accompanied by Lucas Moura, who has usurped Gareth Bale, Erik Lamela and Steven Bergwijn in the final third lately. 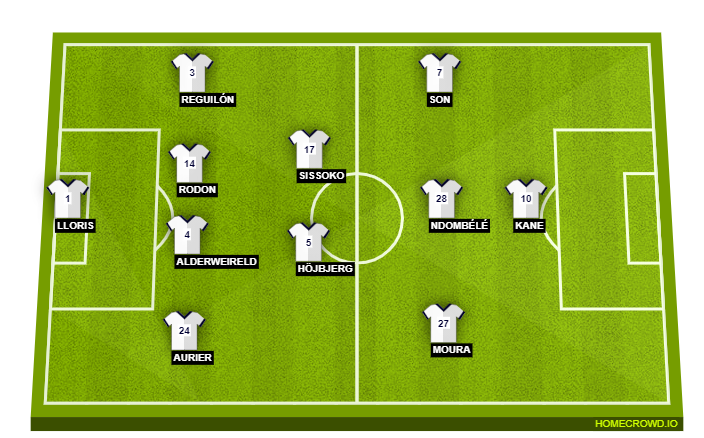 In the news for all the wrong reasons the last time Tottenham took the field, Son Heung-min kicked up a furious debate between Jose Mourinho and Ole Gunnar Solskjaer in the aftermath of Spurs’ game against Manchester United following his ridiculous decision to draw a foul from Scott McTominay in the first half.

Quite often a player who lets his game do the talking for him, Son will be eager to do just that when Tottenham face Everton next up. With the north Londoners’ top four hopes starting to fade, it is up to Son and Kane to rekindle that attacking spark to power their side back up the table, with the games starting to run out. It all starts with the outing at Goodison Park versus Everton.

This is a game that is unlikely to have a lot of goals in it, despite the last meeting between the two sides being a goal fest. For Everton, it will once again be the case of struggling in the absence of Dominic Calvert-Lewin, having won just 25 percent of their Premier League games without the English striker this season, compared to a 50 percent win rate when he has been involved.

As for Tottenham, they have scored just 15 goals in their 14 away league games since plundering 11 in their opening two on the road. It all points towards the game possibly having just the odd goal in it, with Spurs holding the advantage in the absence of Calvert-Lewin, with Son Heung-min and Harry Kane likely to combine for the match-winning strike for Jose Mourinho & co.