A place in the UEFA Champions League semi-finals will be up for grabs when Liverpool welcome Real Madrid to Anfield for the quarter-final second leg on Wednesday.

The curtains are set to fall on the Last Eight stage of the UEFA Champions League this week, with the remaining two second leg fixtures set to be played out on Wednesday. The marquee tie on the day is the meeting between Liverpool and Real Madrid, with the two clubs set to face off at Anfield this midweek.

Liverpool progressed to the quarter-finals by easing past RB Leipzig in the Round of 16, having won their group ahead of Atalanta, Ajax and Midtjylland. Real Madrid, too, managed to clinch their group, although they ran things much closer than the Reds before winning Group B. In the Last 16 stage, Los Blancos beat Atalanta 4-1 on aggregate before setting up the quarter-finals date with the Premier League champions.

Liverpool’s recent results, though, have not been too convincing, especially at home, with Jurgen Klopp’s men managing to win only two of the nine games they have played at Anfield since the turn of the year. Bizarrely enough, the fortress that was Anfield is now considered to be their big weakness, with the Reds having lost six successive home games in the Premier League before their 2-1 win over Aston Villa this past weekend.

Real Madrid, on the other hand, have been in fine touch for quite some time now, with their last defeat in any competition coming back in January. Since then, the Merengues have gone 13 games without being beaten, winning 11 of these fixtures, including a crucial 2-1 success against Barcelona this past Saturday, which has thrown the La Liga title race wide open.

The first leg, played at Estadio Alfredo Di Stefano last week, saw Real Madrid cruise to a 3-1 win over Liverpool, who did nick a crucial away goal. Ahead of the latest meeting between the two sides, The Hard Tackle takes a closer look at the encounter.

Jurgen Klopp does not have any fresh injury concerns hampering his preparations ahead of the visit of Real Madrid for the UEFA Champions League quarter-final second leg meeting. On Wednesday, the Liverpool manager will continue to be bereft of the services of as many as six first-team players.

Virgil van Dijk (knee), Joel Matip (ankle), Joe Gomez (knee) and captain Jordan Henderson (groin) are all long-term absentees for the Reds while Caoimhin Kelleher and Divock Origi continue to be on the sidelines with minor issues. Kelleher’s absence is hardly a concern as Alisson Becker picks himself in goal.

In front of the Brazilian, Liverpool should be set up in their usual 4-3-3 formation, with the defensive line continuing to remain unchanged. Ozan Kabak and Nathaniel Phillips will once again form the central defensive partnership, while Trent Alexander-Arnold and Andrew Robertson will be the two full-backs.

Georginio Wijnaldum has been sub-par for two successive games now and the Dutchman will hope to step up in midfield this week. Wijnaldum will likely have Thiago Alcantara and Fabinho for company in the middle of the park, with the former Real Madrid midfielder sitting at the base of the three-man unit.

Finally, in attack, the key decision will centre around the choice of Mohamed Salah’s partner. Klopp has chosen to rotate the likes of Roberto Firmino, Sadio Mane and Diogo Jota in recent weeks, and against Real Madrid, Jota could be the one to miss out in the final third for Liverpool. 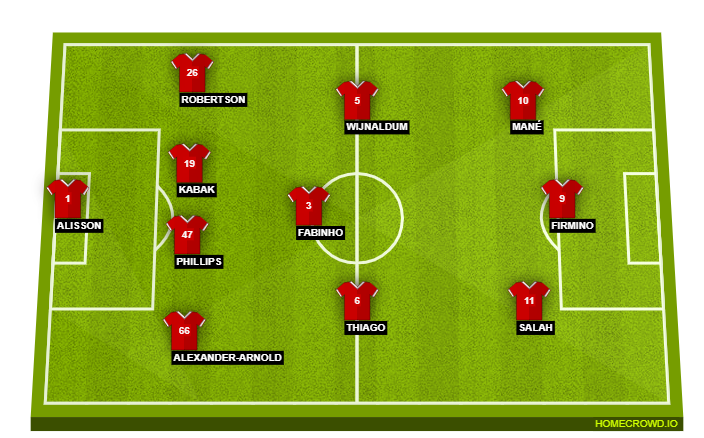 Like his counterpart in the Liverpool dugout, Zinedine Zidane has a plethora of pressing roster issues to contend with ahead of the UEFA Champions League quarter-final second leg tie. On Wednesday, the Real Madrid manager will have to make do without as many as five first-team players.

The latest absentee for Real Madrid is Lucas Vazquez, who sustained what has been deemed to be a season-ending knee injury against Barcelona. The Spaniard has joined the likes of Dani Carvajal, Raphael Varane, Eden Hazard and Sergio Ramos, who has now also tested positive for COVID-19, on the sidelines.

Carvajal and Hazard have rejoined training, but have not been deemed to be fit enough to be a part of the travelling squad for the Liverpool tie. The continued absence of Carvajal coupled with that of Vazquez means Alvaro Odriozola is set to get a rare chance to impress on the right side of the Real Madrid defence.

At the heart of Los Blancos’ backline, Nacho will once again have Eder Militao for company and the duo will hope to impress for yet another game. The defensive line will be completed by Ferland Mendy while Thibaut Courtois is the undisputed first-choice goalkeeper for Real Madrid.

Up ahead in midfield, with Federico Valverde struggling to overcome a foot injury entirely, it is likely that Zidane will revert to the system that was used last week, with Casemiro, Luka Modric and Toni Kroos forming the three-man unit in the centre of the park. Finally, the attacking trio of Marco Asensio, Karim Benzema and Vinicius Jr. is expected to be forged against Liverpool. 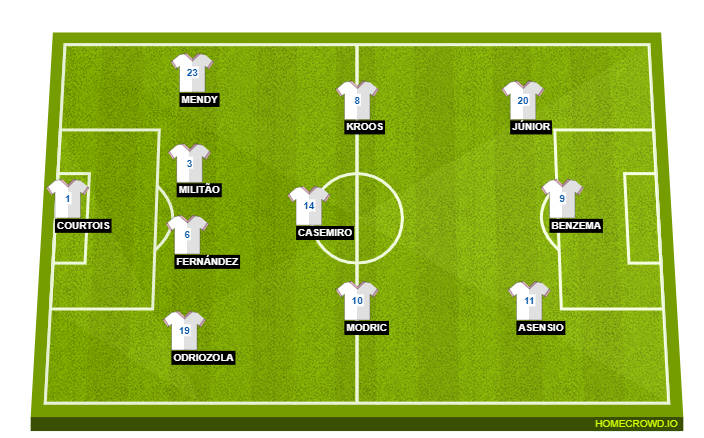 There were plenty of candidates for this section. After all, in what will be a star-studded affair, there cannot be just one player who is worth keeping an eye on. However, Mohamed Salah takes the cake due to the over-reliance of the Liverpool side on him, especially amid the struggles of Sadio Mane, who was horrendous against Real Madrid last week as well.

It has been suggested that Mane is not in the best frames of mind and amid such a predicament, the onus has to be on Salah to deliver the goods in the final third. The Egyptian forward will indeed be in need of the right kind of service from both the full-backs, but if he can rediscover his best levels and score for a fifth successive Champions League game, Liverpool will be in with a shot of winning it.

This one should be a closer contest than the one at the Alfredo Di Stefano Stadium last week. Liverpool showed signs of improvement after a horrible start this past weekend and will carry the momentum of their comeback win into the second leg tie.

However, with the Reds desperately pushing for goals, spaces will likely open up at the back, which should be duly pounced on by Real Madrid. With that in mind, while Liverpool should do enough to win the second leg 2-1, Los Blancos will progress to the UEFA Champions League semi-finals with a 4-3 aggregate scoreline.