The race for the top four will intensify when West Ham United welcome Leicester City to the London Stadium on Sunday.

The games continue to come thick and fast all across Europe, as we begin the run-in period of the season. In England, Gameweek 31 of the 2020/21 Premier League season is underway and on Sunday, four games will be on show, with the second fixture being played at the London Stadium, where West Ham United will play hosts to Leicester City.

West Ham United have been one of the surprise packages of the 2020/21 Premier League season, with David Moyes wielding his magic wand at the London Stadium. From flirting with relegation to a possible top four finish, it has been quite the turnaround for the Hammers, who currently have 52 points from their 30 outings and could return to the top four with a win on Sunday.

West Ham’s opponents, Leicester City, though, have been the second-best travellers in the Premier League this season, meaning the hosts’ job will not be easy. The Foxes seem to have learnt from the mistakes they made last season and are taking one step at a time to seal a top four berth. Currently, Brendan Rodgers & co. are third on the table, with 56 points to their name.

The reverse fixture, played at the King Power Stadium back in October, saw West Ham cruise to a 3-0 win over Leicester, with Michail Antonio, Pablo Fornals and Jarrod Bowen on target. Ahead of the latest meeting between the two sides, The Hard Tackle takes a closer look at the encounter.

Declan Rice will not be available for West Ham United against Leicester City. (Photo by Julian Finney/Getty Images)

David Moyes has a couple of pressing injury concerns hampering his preparations massively ahead of the visit of Leicester City. On Sunday, the West Ham United manager will be bereft of the services of as many as five first-team players.

The major absentees for West Ham are Declan Rice (knee) and Michail Antonio (thigh), with the duo out of action for the foreseeable future. Other than the aforementioned players, the likes of Darren Randolph (hip), Angelo Ogbonna (ankle) and Andriy Yarmolenko (knee) are also sidelined.

In goal, Lukasz Fabianski is a certainty and the Polish custodian will be protected by a West Ham side that will line up in a 3-4-2-1 formation against Leicester. The three-man central defensive unit will comprise of Issa Diop, Craig Dawson, who has joined West Ham permanently this week, and Aaron Cresswell. Cresswell will also have a role to play during set-piece situations.

Up ahead in midfield, Rice’s absence will be telling, but Tomas Soucek and Mark Noble ought to form the double pivot in his stead. Vladimir Coufal and Arthur Masuaku should be the two wing-backs, with Jesse Lingard, Jarrod Bowen and Pablo Fornals expected to be the attacking trifecta for West Ham against Leicester. 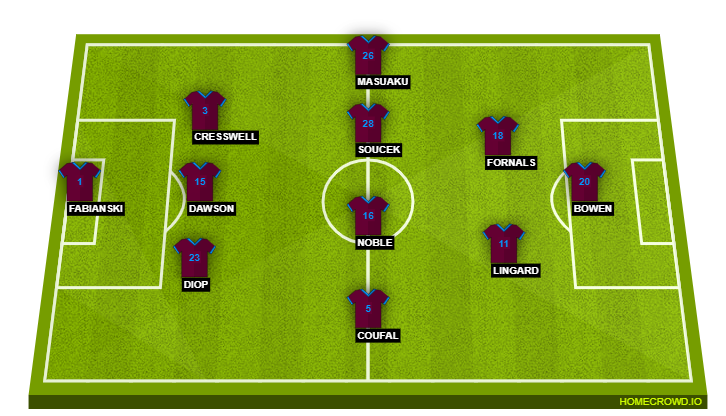 Unlike his counterpart in the West Ham United dugout, Brendan Rodgers does not have any fresh roster issues to contend with ahead of his side’s latest fixture. On Sunday, though, the Leicester City boss will also have to make do without five first-team players.

Caglar Soyuncu is the major absentee for Leicester, with the Turkish defender’s absence meaning Daniel Amartey starts in the back three alongside Jonny Evans and Wesley Fofana, with the trio providing cover to Kasper Schmeichel between the sticks.

Apart from Soyunce, the likes of Wes Morgan (back), James Justin (knee), Cengiz Under (thigh) and Harvey Barnes (knee) also remain unavailable. Barnes’s absence, in particular, has signalled a change in formation, with Leicester being set up in a 3-4-1-2 system by Rodgers lately.

The key players for Leicester against West Ham will be the three midfielders – Wilfred Ndidi, Youri Tielemans and James Maddison. While Ndidi will be the enforcer in the middle of the park, Tielemans will be the workhorse while Maddison will hope to pull the strings higher up the pitch.

Out wide, Timothy Castagne and Marc Albrighton almost pick themselves as the two wing-backs, although Ricardo Pereira is hoping for a start as well. Finally, Jamie Vardy and the in-form Kelechi Iheanacho will form the strike partnership, with the duo being fed by Maddison behind them. 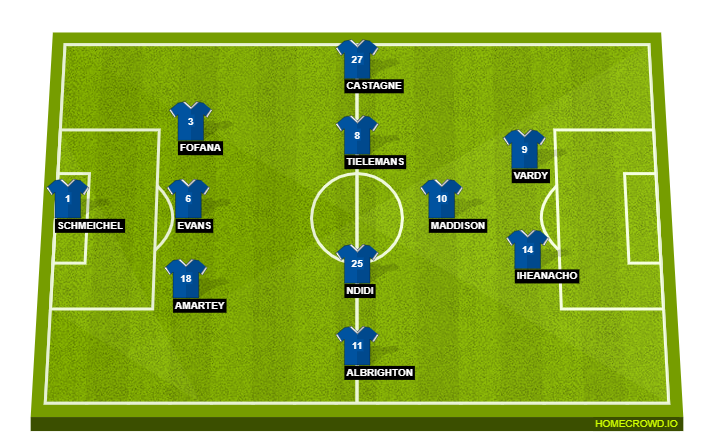 Who else but the man in form? Lingard has been absolutely phenomenal since joining West Ham United from Manchester United on loan this past winter. In 8 games for the Hammers till date, the 28-year-old has 6 goals and 4 assists to show for his efforts. So, it goes without saying that shutting off Lingard will be the biggest task for Leicester City on Sunday.

Ahead of the match-up this weekend, Lingard has called on his teammates to keep on performing to close the 2020/21 season on a strong note. How the rest of the West Ham players go about their task remains to be seen, but Lingard can be expected to be on the money once again.

This is one of the games that can be too close to call. West Ham United have been spectacular at home while Leicester City have been superb on their travels. With that in mind, this should be one keenly-contested affair. However, the absence of a physical presence in the form of Michail Antonio should be telling, with Kelechi Iheanacho delivering the goods on the opposite end to secure a narrow win for Leicester.