League leaders Inter Milan will aim to inch closer to clinching the Serie A title when they welcome Cagliari to San Siro on Sunday.

The decisive stage of the season is here, with the league tables across Europe starting to take their final shape. In Italy, Matchday 30 of the 2020/21 Serie A season is underway and on Sunday, Inter Milan will have the opportunity to take another step towards reclaiming the title when they play hosts to Cagliari at San Siro.

Inter Milan have been extremely consistent in the ongoing campaign, dropping points in just seven of their 29 Serie A games. The Nerazzurri have been nothing short of ruthless in the last few months, winning each of their last 10 league games. In fact, Antonio Conte’s men last suffered a defeat back at the onset of the year, and it is hardly surprising that they are 11 points clear atop the table.

Cagliari, on the other hand, have flirted with relegation all season long and are, in fact, languishing in the drop zone heading into this weekend’s round of fixtures. Gli Isolani are currently 18th in the standings, two points adrift of Torino, who have a game in hand. Their most recent run of form has hardly been inspiring, with Leonardo Semplici’s men failing to win any of their last four games.

The reverse fixture, played at Sardegna Arena back in December, saw Inter Milan come from a goal down to beat Cagliari 3-1. Ahead of the latest meeting between the two sides, The Hard Tackle takes a closer look at the encounter.

Antonio Conte has a fresh roster issue hampering his preparations ahead of the visit of Cagliari. On Sunday, the Inter Milan manager will be bereft of the services of three first-team players due to either an injury concern or suspension.

The latest absentee for the Nerazzurri is key midfielder Nicolo Barella. The former Cagliari midfielder is unavailable due to a suspension, accrued as a result of an accumulation of bookings. In addition, Aleksandar Kolarov and Ivan Perisic remain unavailable due to their respective muscle injuries.

Samir Handanovic is a certainty in goal, with Inter Milan set to line up in their usual 3-5-2 setup in front of the club captain. The three-man central defensive unit for Inter will comprise of Milan Skriniar, Stefan de Vrij and Alessandro Bastoni, who is back at Conte’s disposal after serving out a one-match ban earlier this week.

Up ahead in midfield, Barella’s vacant spot will be taken up by Marcelo Brozovic, who is available again after serving out his suspension last time out against Sassuolo. Brozovic’s return means Christian Eriksen can go back to reprising the box-to-box midfield role, with the Croat sitting at the base of the midfield unit, which will be completed by Roberto Gagliardini.

Out wide, Achraf Hakimi and Ashley Young are automatic picks as the two wing-backs, with the duo being tasked with providing the width higher up the pitch. Finally, the strike partnership will once again be formed by Romelu Lukaku and Lautaro Martinez, both of whom were on target in the last game. 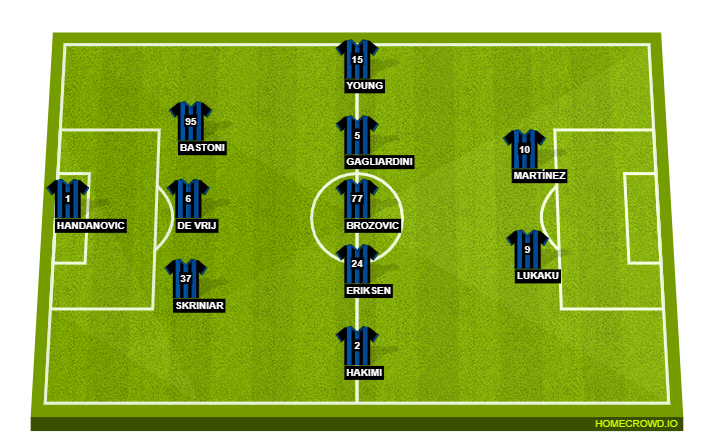 Unlike his counterpart in the Inter Milan dugout, Leonardo Semplici does not have fresh issues to contend with ahead of the trip to San Siro. In fact, the Cagliari manager has been handed a boost on the team news front, with Alessandro Tripaldelli passed fit to return.

The 22-year-old defender is a part of the travelling squad to take on Inter Milan, with just three first-team players missing for Cagliari this weekend. These aforementioned absentees are Alessio Cragno (coronavirus), Luca Ceppitelli (calf) and Riccardo Sottil (thigh), while Nahitan Nandez has overcome a thigh issue to make himself available.

Simone Aresti picks himself between the sticks in the absence of Cragno, with Cagliari being set up in a 3-5-2 formation that will largely mirror the system that Inter Milan will play with. The back three in front of Aresti will have Ragnar Klavan, Diego Godin and Daniele Rugani, while Gabriele Zappa and Charalampos Lykogiannis will be the two wing-backs.

The key man for Cagliari will be Radja Nainggolan, on loan from Inter Milan, with the 32-year-old set to sit deep and look to absorb the pressure that the hosts will aim to create centrally. The former Belgian international will have Razvan Marin and Alfred Duncan for company in the middle of the park. Meanwhile, Giovanni Simeone and captain Joao Pedro will form the strike partnership for the visitors. 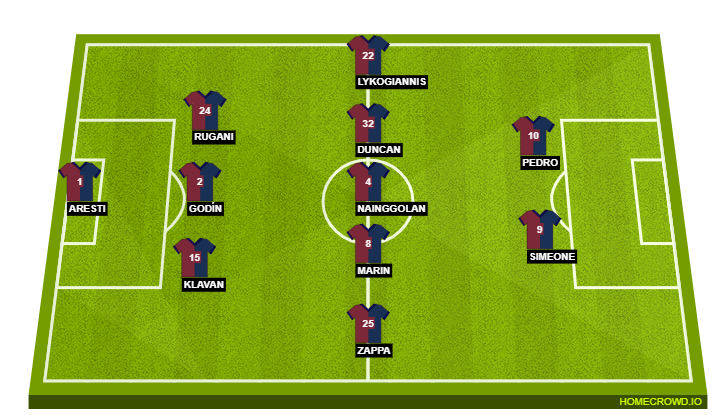 Inter Milan might have made winning a habit, but they have hardly been in rampaging mood in the final third of late. While Romelu Lukaku has been delivering the goods, the chances have not always been forthcoming at an acceptable rate. To address that issue, the midfield has to step up and that comes with Marcelo Brozovic.

Brozovic’s return is also a positive in the sense that Christian Eriksen will have more freedom to express himself in midfield, having played in a restricted manner against Sassuolo. On a personal level, though, the Croat will hope to progress the ball at a quick tempo, which, in turn, should open up the chances for Inter Milan at a better rate.

This is not exactly a potential banana-skin fixture for Inter Milan, even if our predicted scoreline suggests so. Instead, Inter Milan could struggle to be clinical against Cagliari, who should sit deep but still afford a few chances to their hosts. However, Romelu Lukaku, being in the kind of form he is in, should deliver the goods and grab all three points for the Nerazzurri.