Manchester City will hope to take a step closer to reclaiming the Premier League title when they welcome Leeds United to the Etihad on Saturday.

The games continue to come thick and fast all across Europe, as the season reaches its climactic period. In the Premier League, Gameweek 31 of the 2020/21 season is underway and on Saturday, three matches will be on show, with the proceedings kicking off at the Etihad, where Manchester City will play hosts to Leeds United.

Manchester City have been on a rampage over the last few months, having slowly caught up to the top dogs in the Premier League following a slow start to the season before becoming the runaway leaders in the competition. The Citizens, who come into this game on the back of a 2-1 win over Borussia Dortmund in the UEFA Champions League, have lost just one game since November.

Leeds United, on the other hand, have blown hot and cold all through the season, but look primed to retain their status in the Premier League for another season by finishing in the mid-table. Heading into this weekend, the Whites are 11th on the table, level on points with Arsenal, and have gone three games without being defeated.

The reverse fixture, played at Elland Road back in October, saw Leeds come from a goal down to hold Manchester City to a 1-1 draw. Ahead of the latest meeting between the two sides, The Hard Tackle takes a closer look at the encounter.

Pep Guardiola has a fully fit squad at his disposal. (Photo by Shaun Botterill/Getty Images)

Pep Guardiola does not have any fresh injury concerns hampering his preparations ahead of the visit of Leeds United. In fact, the Manchester City manager will have a full strength squad at his disposal on Saturday.

With the UEFA Champions League tie against Borussia Dortmund being evenly poised, it is likely that Guardiola will make a few changes in order to keep his troops fresh for the midweek fixture. With that in mind, Benjamin Mendy ought to return in the left-back slot, and will aim to impress once again.

Another change in defence should see Aymeric Laporte return, partnering Ruben Dias, while Kyle Walker will be stationed as the right-back. In the Manchester City goal, there is no looking past Ederson Moraes, who will be keen to keep yet another clean sheet.

Up ahead in midfield, Kevin De Bruyne could be given a breather, with Bernardo Silva starting in the three-man unit alongside Fernandinho and Ilkay Gundogan. Finally, in attack, Sergio Aguero, Gabriel Jesus and Raheem Sterling should all return. Aguero will lead the line for Manchester City against Leeds, with Jesus and Sterling being the two wide men. 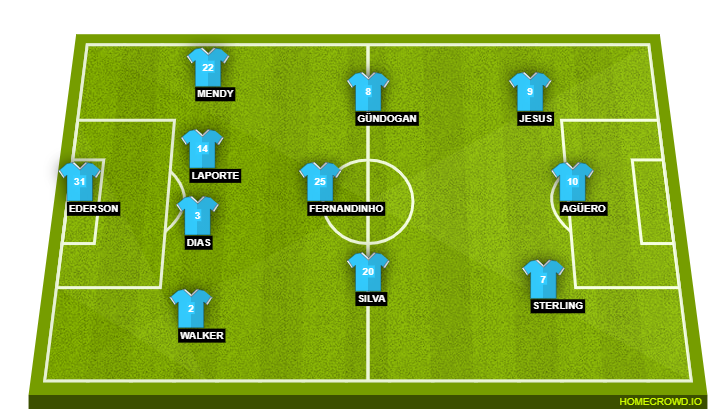 Unlike his counterpart in the Manchester City dugout, Marcelo Bielsa has a fresh issue to contend with ahead of the trip to the Etihad. On Saturday, the Leeds United manager will have to make do without as many as two first-team players.

While Adam Forshaw remains a long-term absentee, Jack Harrison is also unavailable to take on his parent club due to the terms of his loan deal with Leeds. Harrison’s absence means Helder Costa should be recalled to the starting lineup, taking his place on the right wing.

That means Raphinha could move out to the left wing, looking to take on the Manchester City defenders at every given opportunity. Spearheading the Leeds attack will be Patrick Bamford, who will have Stuart Dallas and Tyler Roberts playing off of him, while Kalvin Phillips will hope to pull the strings from a deeper position while keeping a check on Ilkay Gundogan’s output.

As for the defence, Liam Cooper and Diego Llorente will form the central defensive partnership for Leeds, with Luke Ayling and Ezgjan Alioski being the two full-backs. Finally, Illan Meslier will be a certain starter in between the stocks against Manchester City. 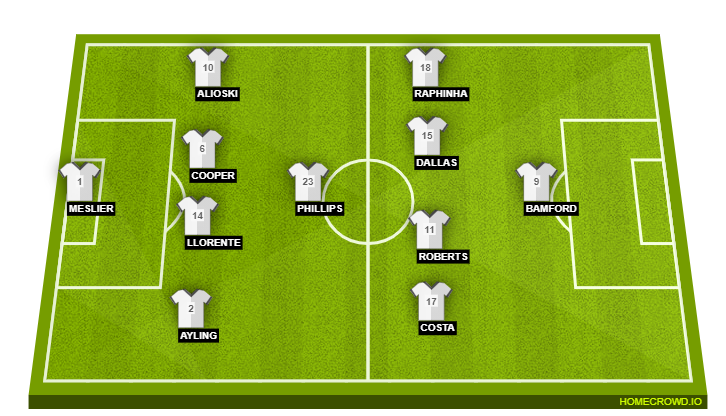 Just a couple of months remain for Sergio Aguero to bring the curtains down on a glorious spell at Manchester City. His unavailability this term means his time at the Etihad is coming to an end on a bit of whimper, but Aguero will be eager to end the stint on a high.

On Saturday, Leeds United will become the 34th different team that Aguero would have played against in the Premier League and he will surely look to make a difference in the final third with his typical movement and clinical finishing. Aguero will also aim to show that he still has a lot to offer, despite Manchester City’s decision to part with him.

This is as straightforward as they come. Leeds United will, as always, look to push forward and search for openings. However, Manchester City will hold firm at the back, which then paves the way for a comfortable 3-0 win for Pep Guardiola’s men, with Sergio Aguero and Raheem Sterling likely to be the goalscorers.