Arsenal and Liverpool will both be desperate to claim all three points when they meet at the Emirates on Saturday.

Club football resumes this weekend after a near two-week hiatus, with the dreaded international break finally behind us. In the Premier League, Gameweek 30 of the 2020/21 season will get underway on Saturday, with the marquee fixture of the weekend being played at the Emirates, where Arsenal will be playing hosts to Liverpool.

Arsenal have endured another difficult season in 2020/21, which is set to end with failure to qualify for the UEFA Champions League once again. The Gunners have typically blown hot and cold in the Premier League despite an improvement in their playing style. Mikel Arteta & co. have won just four of their last 10 in the top-flight and are currently placed 9th on the table.

Liverpool, on the other hand, have endured a disastrous defence of their Premier League crown. While the Reds were right in the thick of things in the title race before the turn of the year, 2021 has come with a stunning downturn in form. The defending champions have managed to win just four of the 14 league games they have played this year, shockingly losing eight matches.

The reverse fixture, played at Anfield back in September, saw Liverpool come back from a goal down to beat Arsenal 3-1. Ahead of the latest meeting between the two sides, The Hard Tackle takes a closer look at the encounter.

Bukayo Saka could miss out with a hamstring injury. (Photo by Shaun Botterill/Getty Images)

Mikel Arteta has a couple of fresh injury concerns hampering his preparations ahead of the visit of Liverpool. On Saturday, the Arsenal manager could be bereft of the services of as many as four first-team players.

Willian (calf) is the only player to have fully recovered from his issue while David Luiz (knee) is the only confirmed absentee. That means that the likes of Granit Xhaka, Emile Smith Rowe and Bukayo Saka are all facing a race against time to confirm their status of being available to take on Liverpool.

In Luiz’s absence, Pablo Mari and Gabriel Magalhaes should form the central defensive partnership for Arsenal, who will line up in their usual 4-2-3-1 formation against Liverpool. Hector Bellerin and Kieran Tierney ought to be the two full-backs while Bernd Leno is a certainty in goal.

Up ahead in midfield, Thomas Partey will be a part of the engine room and will hope to have Xhaka as his partner. If the Swiss international is unable to start then Dani Ceballos will take his spot in the side. Meanwhile, Martin Odegaard should reprise the no. 10 role, especially amid uncertainties over Smith Rowe’s participation.

It is the potential absence of Saka, though, that will be most concerning and Nicolas Pepe is likely to be deployed on the right-wing, with Pierre-Emerick Aubameyang taking his place on the left flank. Finally, Alexandre Lacazette will lead the line for Arsenal against Liverpool.

As has been the case for large parts of the season, Jurgen Klopp has a lengthy absentee list to deal with ahead of the trip to the capital to lock horns with Arsenal. On Saturday, the Liverpool boss will have to make do without six first-team players, with most of those being absentees that are done for the season.

These aforementioned players are Virgil van Dijk, Joe Gomez, Joel Matip and Jordan Henderson. In addition, Caoimhin Kelleher and Divock Origi are also unavailable for selection. However, in some good news, Roberto Firmino is back at Klopp’s disposal and is fit to start.

Firmino, though, might have to suffice with a place on the bench, with Diogo Jota starting in his stead in the false nine role. Jota will be flanked by Mohamed Salah and Sadio Mane, who has a fantastic record against Arsenal.

Meanwhile, in midfield, Thiago Alcantara and Georginio Wijnaldum are certain picks, with Fabinho providing them company once again. That decision means that Nat Phillips and Ozan Kabak will pair up at the heart of the Liverpool defence, with Andrew Robertson and Trent Alexander-Arnold being the full-back pairing while Alisson Becker picks himself between the sticks. 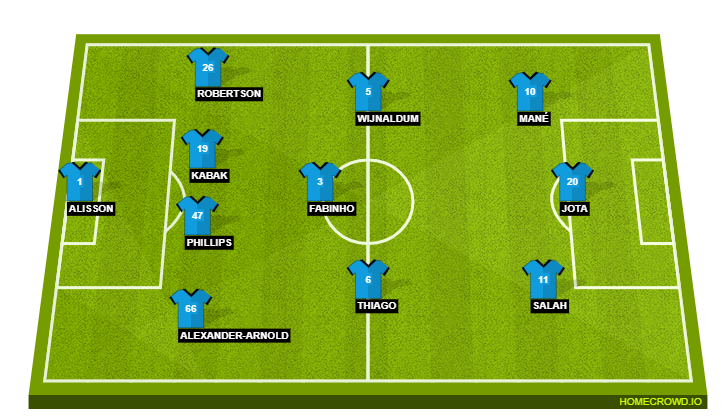 At a time when his future has been called into question once again, Pierre-Emerick Aubameyang is in need of delivering the goods for Arsenal. In what has been a miserable season for the Arsenal captain, something has to give if he is to secure his long-term future at the Emirates.

Disciplinary issues have not helped either and it is high time that Aubameyang steps up. His record against Liverpool, though, is quite abysmal, to say the least and it will be interesting to see if he can somehow improve it and inspire Arsenal to a critical win over Liverpool.

This is a match that is unlikely to have many goals in it. Arsenal, despite failing to keep a clean sheet in each of their last eight Premier League games, are one of the more solid teams in all of Premier League, at least on paper. On the other hand, Liverpool’s output at the back has beefed up following Fabinho’s return to midfield.

Going forward, both teams have struggled a great deal in recent times and with all that in mind, it looks like Arsenal and Liverpool are quite evenly matched. The Hard Tackle, therefore, predicts a 1-1 draw between the Premier League bigwigs, in a result that does not really help either side.