Spain will hope to end the international break on a positive note when they welcome Kosovo to Estadio de la Cartuja on Wednesday.

The curtains will fall on Matchday 3 of the European leg of the FIFA World Cup 2022 Qualifiers on Wednesday, with the international break reaching its end. In Group B, Spain will be aiming to continue their unbeaten start to the qualifying campaign when they play hosts to Kosovo at Estadio de la Cartuja.

Spain did not make the best of starts to their campaign in the FIFA World Cup 2022 Qualifiers, as they were held to a 1-1 draw by Greece on Matchday 1. La Furia Roja followed that up with a hard-fought 2-1 win over Georgia, coming from a goal down to claim their first win of the Qualifiers, stretching their unbeaten run to five games.

Kosovo, on the other hand, have played just one game in the FIFA World Cup 2022 Qualifiers so far and were handily beaten 3-0 by Sweden, with the result leaving them at the bottom of the Group B table. Their other game in the ongoing international break saw them cruise to a 4-0 win over Lithuania, although their form in the past year or so has been underwhelming.

Spain and Kosovo will be locking horns with each other for the very first time and ahead of their maiden meeting on Wednesday, The Hard Tackle takes a closer look at the encounter.

Luis Enrique does not have any fresh injury concerns hampering his preparations ahead of the visit of Kosovo. The only major absentee for Spain remains Pau Torres, although Enrique seems to be content with the central defensive options he currently has at his disposal.

Having said that, Gerard Moreno has been struggling with a minor muscle injury and could miss a third successive game for Spain. With the Villarreal forward unlikely to start, Alvaro Morata will once again lead the line for La Furia Roja against Kosovo. Out wide, the support will come from Ferran Torres and Dani Olmo, both of whom delivered the goods last time out against Georgia.

While Olmo will replace Bryan Gil, Koke ought to come in for Fabian Ruiz in the middle of the park to add more steel to Spain’s midfield. Rodri should also return, replacing Sergio Busquets at the base of the three-man midfield, while Pedri will continue after impressing on full debut this past weekend.

At the back, the major change will see Sergio Ramos come in for Diego Llorente, with Eric Garcia set to start a third successive game at the heart of Spain’s defence. Out wide, Jordi Alba and Pedro Porro should retain their spots as the two full-backs, with the duo having a lot of responsibility on them when charging forward. Finally, in goal, Unai Simon will start ahead of David de Gea again. 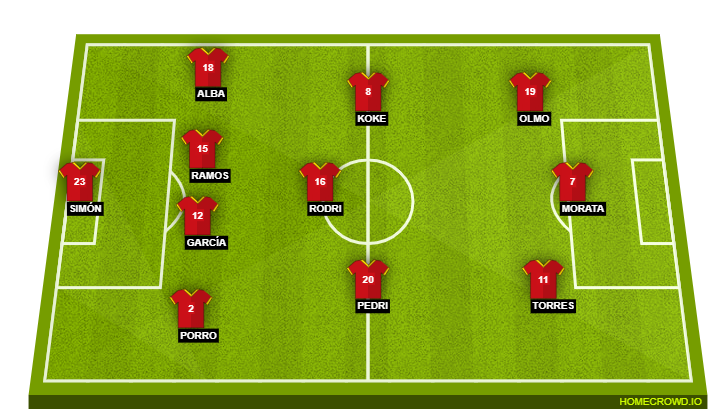 Unlike his counterpart in the Spain dugout, Bernard Challandes has fresh roster issues to contend with ahead of the trip to Seville. The Kosovo boss had already been dealt with a number of concerns before his side’s first game in the ongoing international break and on Wednesday, he will also be without Bernard Berisha.

The 29-year-old was sent off for two bookable offences against Sweden and is unavailable to take on Spain. In addition, Valon Berisha and Bersant Celina miss out due to coronavirus restrictions, although the former is sidelined due to an injury anyway.

Celina’s absence means Besar Halimi will likely be deployed in the no. 10 role, where he will have more freedom to express himself. Halimi’s place in the midfield double pivot will likely be taken by Idriz Voca, who will pair up with vice-captain Hekuran Kryeziu in the middle of the park.

Speaking of Halimi again, the 26-year-old should be flanked by Milot Rashica and Arber Zeneli in the final third, with the wide duo primarily looking to veer infield to support central striker Vedat Muriqi, who will need to be clinical against Spain if Kosovo are to get anything out of the game.

Moving back, captain Samir Ujkani will take his place between the sticks, with Kosovo lining up in a 4-2-3-1 formation in front of him. The backline is unlikely to be tinkered with, as Mergim Vojvoda and Fidan Aliti will continue their central defensive partnership while Florent Hadergjonaj and Benjamin Kololli should feature as the two full-backs once again. 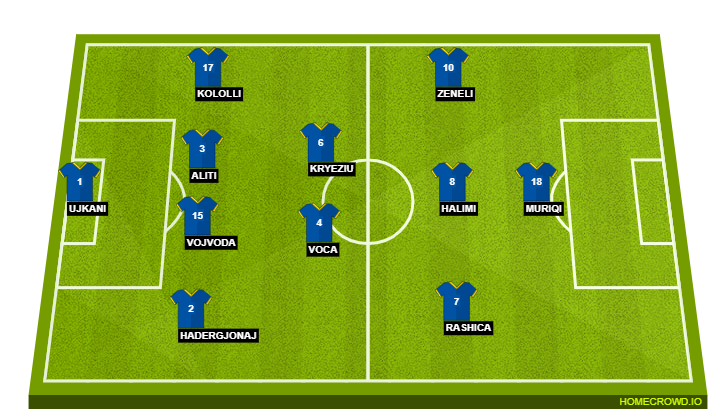 There are plenty of options for this section, but Sergio Ramos takes the cake for a couple of reasons. Firstly, this will be another test of his fitness, with Luis Enrique – and Zinedine Zidane from afar – assessing how far he has come since returning from a long layoff.

Having not featured a great deal so far, this will be the opportunity for Ramos to play the entire 90 and see Spain through against a tricky Kosovo side. Secondly, with his Real Madrid future still up in the air, this will be the chance for Ramos to let his game do the talking for him and move away from all the distractions of the contract negotiations while still in Spain colours.

Kosovo have been struggling for quite some time now, but this will still not be a straightforward outing for Spain. Having said that, the return of Sergio Ramos ought to do enough to keep the visitors at bay for the most part, which will ultimately pave the way for a couple of goals that will seal the deal. With that in mind, The Hard Tackle predicts a 2-0 win for Luis Enrique & co.