Netherlands will be aiming to end the international break on a high when they take on Gibraltar in a Group G game at the Victoria Stadium on Tuesday.

The international break is approaching its end, with the third and final games of the period set to be played this week in Europe with Matchday 3 of the FIFA World Cup 2022 Qualifiers. In Group G, the focus will be on Netherlands when they lock horns with Gibraltar at the Victoria Stadium on Tuesday night.

Gibraltar have started their campaign in the FIFA World Cup 2022 Qualifiers on the worst possible note, having been belted by Norway and Montenegro in their first two games. In fact, Julio Cesar Ribas’ men have only managed to win one of their last seven games, that being over fellow minnows Liechtenstein in the UEFA Europa League last year.

Netherlands, on the other hand, continue to blow hot and cold in their transition under the tutelage of Frank de Boer. This has been prevalent in the FIFA World Cup 2022 Qualifiers, as they were handed a shock 4-2 defeat by Turkey in the opening fixture before beating Latvia this past weekend to get their first points on the board.

Gibraltar and Netherlands have never clashed before and ahead of the first-ever meeting between the two sides, The Hard Tackle takes a closer look at the encounter.

2/3 of the way through our opening World Cup Qualifier fixtures ‼️ Next up 🇳🇱 #WorldCup #Qatar2022 pic.twitter.com/lWNftgCPip

Julio Cesar Ribas has picked a big unit for the first international break of the season and should pick his strongest side to take on Netherlands. The objective will be to contain and frustrate the visitors as much as possible, and with that in mind, the Gibraltar head coach will line his side up in a 5-4-1 formation, with Dayle Coleing taking his place in goal.

In front of Coleing, the three-man central defensive unit will feature captain Roy Chipolina, Scott Wiseman and Erin Barnett, with Jayce Olivero and vice-captain Jack Sergeant being the two full-backs, both of whom will largely remain pinned back to support the centre-backs.

The second bank will have Louie Annesley and Anthony Hernandez pair up in the central areas, aiming to keep things tight in the middle of the park. Out wide, Liam Walker and Kyle Casciaro will be tasked with remaining compact in the defensive phase while providing the forward thrust on the transitions. Finally, Tjay De Barr will lead the line for Gibraltar against Netherlands. 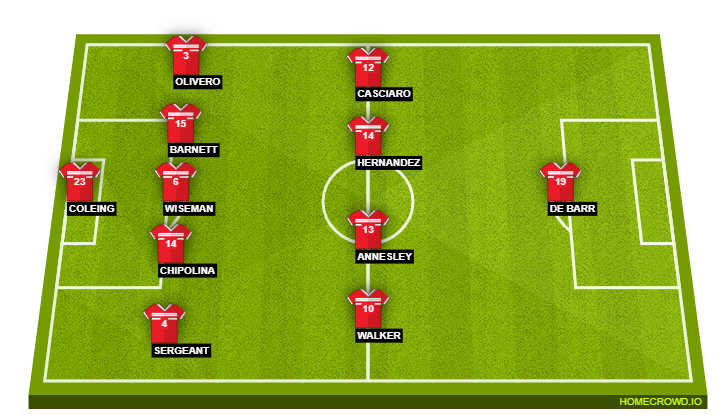 Frank de Boer does not have any fresh injury concerns hampering his preparations ahead of the trip to the Victoria Stadium to take on Gibraltar. On Tuesday, though, the Netherlands boss could make wholesale changes to his most recent side, considering the stature of the opponents.

In goal, Marco Bizot could come in for Tim Krul for only his second appearance for Netherlands, who will likely be set up in a 4-2-3-1 formation against Gibraltar. The defence ought to see just one retention, with Matthijs de Ligt starting a third successive game.

The Juventus defender, though, should have Joel Veltman as his partner at the heart of the Dutch defence, with Kenny Tete and Patrick van Aanholt coming in as the two full-backs. The midfield double pivot is expected to be entirely rotated, with Ryan Gravenberch set to make his full debut for Netherlands while Marten de Roon will get a chance to impress after a sub-par showing against Turkey.

Up ahead in attack, Donny van de Beek is yearning for a chance, which he should get on Tuesday against Gibraltar. Out wide, Ryan Babel and Steven Bergwijn appear set to return, looking to be direct with their approach, while Donyell Malen will lead the line for Netherlands, coming in for Luuk de Jong. 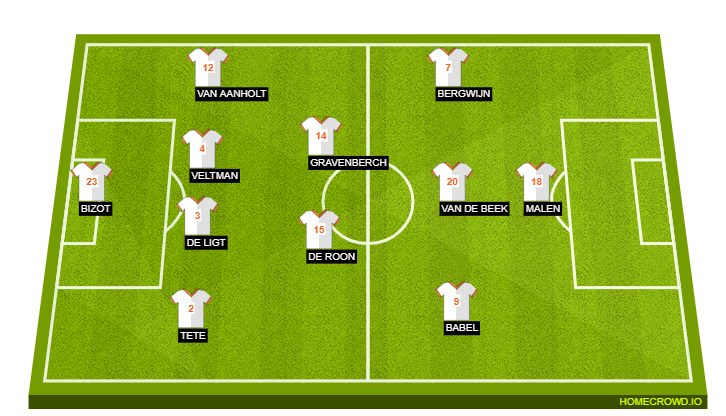 It has been a difficult season for Steven Bergwijn. What started as a promising campaign that was supposed to be the making of the 23-year-old has turned into a horror show. Not only has Bergwijn become something of an afterthought at club level, but he has also lost his spot in his national side.

Against Gibraltar, though, he is likely to get a chance to impress and this will be the make or break game for Bergwijn ahead of the European Championships. If he manages to deliver the goods, there is a chance that he will be in contention for a starting spot. Otherwise, he could remain as a rotation option or worse still, out of the squad. A big game for the youngster.

This should be a rare straightforward game for Netherlands under Frank de Boer. While Gibraltar will make things difficult initially with their resolute nature, the gulf in quality will ultimately be telling, with the Dutch defence unlikely to be troubled much. With that in mind, The Hard Tackle predicts a 3-0 win for the visitors.