Netherlands will hope to get back to winning ways and kick-start their campaign in the FIFA World Cup 2022 Qualifiers when they face Latvia on Saturday.

The FIFA World Cup 2022 Qualifiers continue in Europe and heading into the weekend, Matchday 2 is set to be played. In Group G, Netherlands will be eager to get their first points on the board when they play hosts to Latvia at the Johann Cruijff ArenA on Saturday night.

Netherlands are currently in a transitional period, with Frank de Boer still not managing to get the best out of the players since replacing Ronald Koeman. Under the tutelage of de Boer, the Oranje have managed to win just two of the seven games till date, with their opening fixture in the FIFA World Cup 2022 Qualifiers ending in a shock 4-2 defeat to Turkey earlier this week.

Latvia, on the other hand, also made a forgettable start to their campaign in the FIFA World Cup 2022 Qualifiers, losing 2-1 to Montenegro after grabbing the lead initially. Dainis Kazakevics & co. have, in fact, won just two of their last nine games across all competitions and finished third in their group in the UEFA Nations League last year.

Netherlands were 2-0 victors the last time they locked horns with Latvia, back in the qualification campaign for the UEFA Euro 2016. Ahead of the latest meeting between the two sides, The Hard Tackle takes a closer look at the encounter.

Jasper Cillessen has pulled out of the Netherlands squad due to injury. (Photo by Victor Decolongon/Getty Images)

Frank de Boer has a major injury concern that has hampered his preparation this week, with first-choice goalkeeper Jasper Cillessen pulling out of the squad due to an injury. In his stead, Marco Bizot has been picked as a replacement, although 30-year-old is unlikely to start.

Tim Krul should be the man in goal for Netherlands despite a sub-par showing last time out versus Turkey. In front of him, the hosts should line up in a 4-2-3-1 formation, with the defence likely to see one change.

On the right side of Netherlands’ backline, Denzel Dumfries ought to replace Kenny Tete, who was quite unimpressive against Turkey. On the opposite flank, though, Owen Wijndal is likely to start again despite being well off his best. At the heart of the defence, there is no looking past Matthijs de Ligt and Daley Blind, especially with both Virgil van Dijk and Stefan de Vrij unavailable.

Up ahead in midfield, Davy Klaassen picks himself after a solid showing off the bench earlier this week. Klaassen will replace Marten de Roon in the double pivot, where he will line up alongside Frenkie de Jong, who will hope to step up after failing to perform to potential in the midweek tie. Georginio Wijnaldum was disappointing as well and will aim to do better against Latvia.

Donyell Malen failed to make an impression as well and should drop out of the side to make way for Steven Bergwijn, although Luuk de Jong is an option in attack as well, with the striker’s selection likely to mean a change in position for Memphis Depay. Depay, though, will lead the line for Netherlands against Latvia, with Steven Berghuis completing the attacking unit. 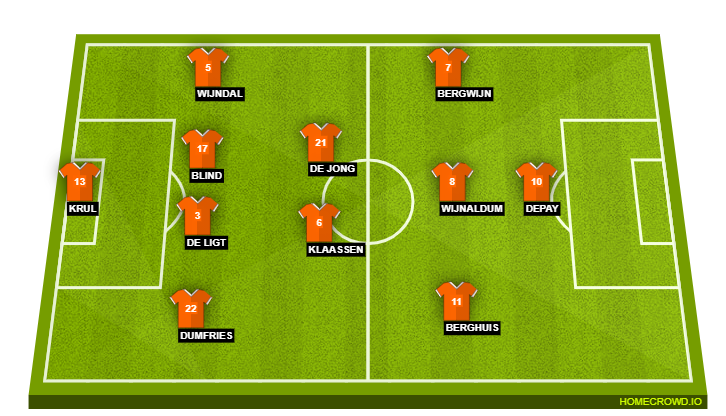 Like his counterpart in the Netherlands dugout, Dainis Kazakevics has fresh roster issues to deal with as well ahead of his side’s match-ups in the FIFA World Cup 2022 Qualifiers. Elvis Stuglis and Martins Kigurs have both dropped out of the squad, with the former suffering from health problems.

In addition,  Vladislavs Gutkovskis and Kaspars Dubra have become victims to injuries and will play no part against Netherlands on Saturday. Despite the nature of their defeat, changes are likely to be kept to a minimum by Kazakevics, who has been trying out the 4-4-2 formation lately.

In between the sticks, Pavel Steinbors is expected to get the nod, with Roberts Savalnieks, Marcis Oss, Vitalijs Maksimenko and Raivis Jurkovkis forming the four-man defensive unit that will mostly remain compact at the back and aim to cut out the space for the Netherlands’ attack to pounce on.

The second bank of four, which will also be the second line of press behind the two strikers, with Arturs Zjuzins and Kristers Tobers, in particular, having a big role to play. The two central midfielders will aim to keep the midfield line disciplined while also keeping a check on Netherlands captain Georginio Wijnaldum.

Out wide Alvis Jaunzems and Andrejs Ciganiks will be tasked with providing the width during the transitional periods, with Davis Ikaunieks and Roberts Uldrikis forming the strike partnership for Latvia against Netherlands. 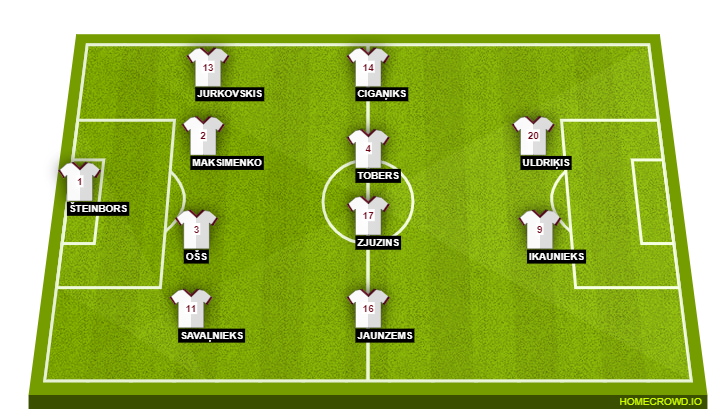 Earlier this week, the big reason why Netherlands could not put Turkey under sustained pressure was the failure of their midfielders in imposing themselves on their counterparts. Marten de Roon just did not manage to turn up in Istanbul and the impact that Davy Klaassen had off the bench means he is a guaranteed starter against Latvia.

The Ajax midfielder provides the progression from the middle of the park that de Roon just cannot, which will be key to put a resolute Latvia under pressure. The 28-year-old’s ghosting runs will also come in handy, giving Netherlands an added dimension going forward. Most importantly, though, his presence could allow the hosts to dominate the midfield battle, which, in turn, can pave the way for a straightforward win.

They might have once again failed to perform to potential under Frank de Boer, but against Latvia, Netherlands ought to be much better. The call for improvement from Frenkie de Jong should be heeded and the Oranje should cruise to a win here, even if they are not in full flow at times. The Hard Tackle predicts a 2-0 success for Netherlands.