Netherlands will aim to kick off their qualifying campaign for the FIFA World Cup 2022 in style when they face Turkey at the Ataturk Olympic Stadium.

The first international break of the year is here and this will also be the final break before the end of the season in club football. In Europe, this brings the onset of the FIFA World Cup 2022 Qualifiers, which kicks off at the Ataturk Olympic Stadium in Istanbul, where Turkey will play hosts to Netherlands on Wednesday evening.

2020 was a difficult year for Turkey, who only managed to win one of the eight matches they played last year. That sole victory came in their penultimate match of the year, while their campaign in the UEFA Nations League ended in a dud, as they finished bottom of their group.

Netherlands, on the other hand, started a transitional period in 2020, which saw Ronald Koeman call it quits to join Barcelona. The departure of the head coach who turned things around brilliantly for the Oranje was always going to have a telling effect. Frank de Boer replaced Koeman and under his tutelage, the Dutch national side have won just two of the six games.

Turkey were 3-0 victors the last time they locked horns with Netherlands, with the result being one of the determining factors in the visitors’ failure to qualify for the UEFA Euro 2016. Ahead of the latest meeting between the two sides, The Hard Tackle takes a closer look at the encounter.

Caglar Soyuncu is back in the Turkey squad. (Photo by Patrik Stollarz/AFP/Getty Images)

Senol Gunes has made quite a few alterations to the squad he picked in the last international break of 2020. As many as seven players have been replaced, with the major absentees being Cengiz Under and Mahmut Tekdemir.

Gunes employed the 4-1-2-1-2 formation the last time Turkey took the field and judging by his squad selection, he is likely to make use of a similar system, with Mert Gunok taking his place in goal.

Caglar Soyuncu is back in the Turkey squad and he should be reinstated at the heart of the defence, where he will pair up with Merih Demiral. Out wide, Nazim Sangare and Caner Erkin will likely be the two full-backs, with the duo being tasked with providing width in the absence of natural wingers.

Up ahead in midfield, Okay Yokuslu will sit at the base of the diamond, with Hakan Calhanoglu being the creator-in-chief, sitting at the tip. Ozan Tufan and Orkun Kokcu will provide defensive support to Yokuslu, while also adding to the numbers higher up the pitch. Finally, Cenk Tosun and captain Burak Yilmaz will form the strike partnership for Turkey. 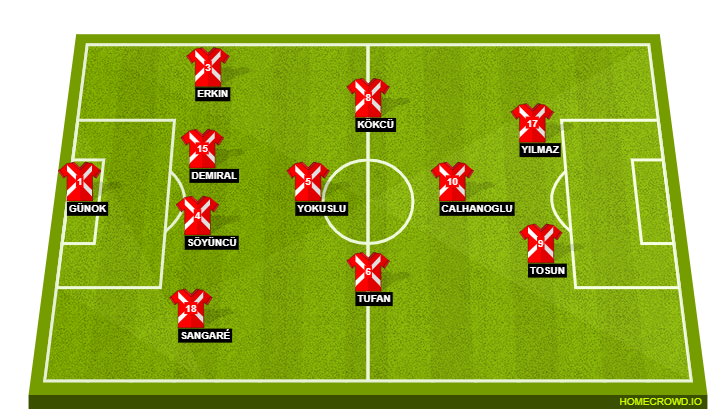 Like his counterpart in the Turkey dugout, Frank de Boer has some key players missing as well, with the major absentee being Stefan de Vrij after he tested positive for coronavirus. Meanwhile, captain Virgil van Dijk continues to be unavailable due to his long-term knee injury.

Matthijs de Ligt, though, is back in the squad and should slot in the central defensive partnership along with Daley Blind. Denzel Dumfries and Owen Wijndal ought to be the full-back pairing, with Jasper Cillessen expected to take his spot between the sticks.

In front of the Valencia stopper, Netherlands will be set up in the 4-2-3-1 formation that has become the custom ever since Ronald Koeman was in charge of the national side. And, in the double pivot in midfield, Frenkie de Jong should have Marten de Roon for company, largely due to Donny van de Beek’s struggles at Manchester United.

Georginio Wijnaldum, who will continue to don the captain’s armband in the absence of van Dijk, will reprise the no. 10 role, aiming to arrive deep into the Turkey box to look for scoring opportunities. Steven Bergwijn and Donyell Malen will be the two wide men, with talisman Memphis Depay set to lead the line for Netherlands. 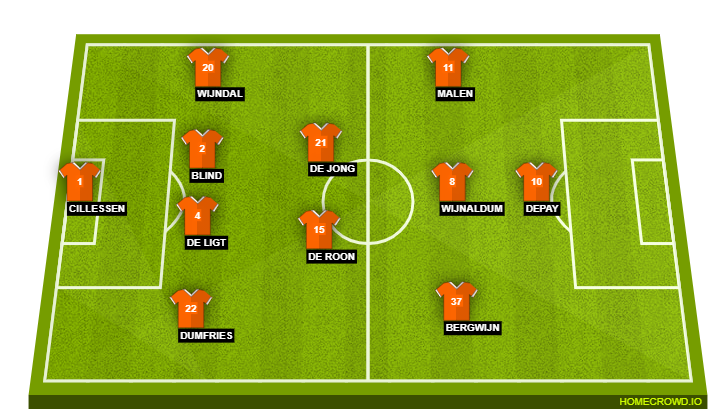 The key man for Netherlands. (Photo by Jerry Lampen/ANP/AFP via Getty Images)

Who else but the talisman for Netherlands? The Oranje have not been at their fluent best ever since Frank de Boer filled the huge void left by the departure of Ronald Koeman. And, if Netherlands are to regain the fear factor they had been building under the current Barcelona manager, it is Depay who will need to come to the fore.

The 27-year-old has been in fine touch for Lyon this season, with 15 goals and 9 assists in 31 outings across all competitions. With speculation surrounding his future at the club level intensifying, this will be another opportunity for Depay to attract suitors while also delivering the goods for his national side.

Turkey, despite their poor results in 2020, are no pushovers and with the likes of Caglar Soyuncu and Hakan Calhanoglu in the squad, Netherlands cannot take their hosts lightly. Having said that, in Memphis Depay and Frenkie de Jong, the visitors have true game-changers and the duo should power the visitors to a narrow win in their opening fixture in the FIFA World Cup 2022 Qualifiers.