Belgium will aim to make a strong start to their FIFA World Cup 2022 qualifying campaign when they welcome Wales to the King Power at Den Dreef Stadion.

The FIFA World Cup 2022 is a little over a year away and that means the qualifying campaign in Europe is going to be jam-packed this year. The qualifiers begin this week, with top-ranked Belgium kicking things off in Group E against Wales at the King Power at Den Dreef Stadion on Wednesday night.

Belgium are coming off a memorable 2020, when they lost just one of the eight games they played all year. That defeat to England did not stop them from topping Group 2 in the UEFA Nations League A, with the finals set to be played later this year. As far as the FIFA World Cup 2022 Qualifiers are concerned, the Red Devils are the odds on favourites to top Group E and book their place in next year’s tournament.

Wales, on the other hand, are not fancied to top their group but are expected to finish runners-up and progress to the qualifying play-offs. 2020 was a solid year for the Dragons, who only lost the friendly to England in October, winning five of the remaining seven games to continue their resurgence under Ryan Giggs while also earning promotion to UEFA Nations League A for the next edition.

Wales were 3-1 victors the last time they locked horns with Belgium, back in the 2016 UEFA Euro. Ahead of the latest meeting between the two sides, The Hard Tackle takes a closer look at the encounter.

Roberto Martinez has made quite a few alterations to the last squad he picked, back in November, although only a couple of key players are missing for Belgium. These aforementioned players are Axel Witsel and captain Eden Hazard, who continues to struggle with his persistent ankle issue.

The big question mark ahead of the latest round of international fixtures, though, has been looming around the availability of Romelu Lukaku, amid a coronavirus outbreak at Inter Milan. However, the Red Devils’ all-time top scorer is at Martinez’s disposal after testing negative for COVID-19.

With Lukaku available, he should spearhead the Belgium attack and will hold the key in the absence of Eden Hazard. The 27-year-old will receive support from Kevin De Bruyne and Dries Mertens, with the former also combining with Youri Tielemans to provide the creative impetus to the hosts’ build-up play.

Tielemans, though, will also be pulling the strings from a deep lying position, providing defensive support to Leander Dendoncker. The two wing-backs – Timothy Castagne and Thorgan Hazard – will provide the width high up. Meanwhile, the back three will feature Toby Alderweireld, Jan Vertonghen and Jason Denayer, with Thibaut Courtois an automatic pick between the sticks. 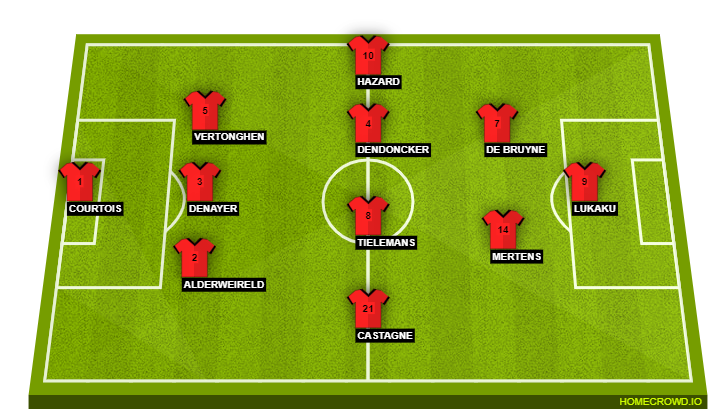 Rob Page has not made any major changes to the squad that had been at his disposal the last time Wales took the field. Owain Fon Williams and David Brooks are the only players who missed the cut, while Aaron Ramsey has withdrawn from the squad due to a thigh injury.

The good news, though, comes in the form of Wayne Hennessey’s availability as well as the promising form of Gareth Bale. Hennessey ought to take his place in goal for Wales, who will line up in a 3-4-3 formation against Belgium.

The three-man central defensive unit ought to feature Chris Mepham, Joe Rodon and Ben Davies, who will look to be the leader at the back for Wales and keep the defensive line organised. Connor Roberts and Rhys Norrington-Davies will be the two wing-backs, with the duo being tasked with providing the width higher up the pitch.

This will allow the two wide forwards – Gareth Bale and Daniel James – to veer infield and add to the numbers in the central areas, where Kieffer Moore will be leading the line for Wales against Belgium. In the middle of the park, Ramsey’s absence means Joe Allen becomes a certainty, with Ethan Ampadu playing the holding midfield role. 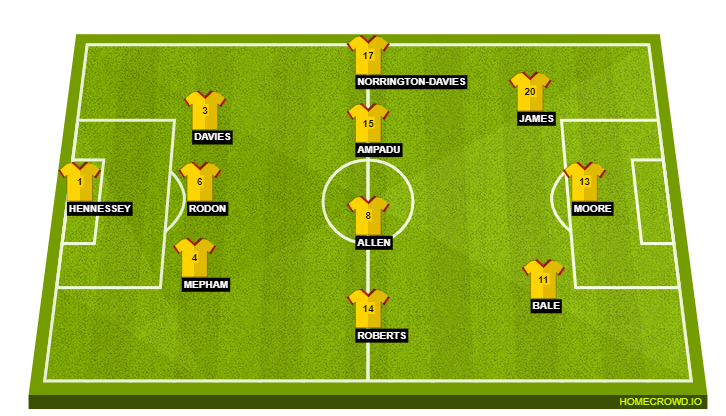 Whenever Belgium take the field, the spotlight invariably is on the likes of Eden Hazard, Kevin De Bruyne and Romelu Lukaku. However, this time around, things are a little different. While Lukaku and De Bruyne will surely have a lot riding on them, Youri Tielemans will hold the key with his defence-splitting passes from deep.

Indeed, with Wales likely to focus on keeping a lid on De Bruyne and Lukaku, Tielemans’s ghosting runs have the potential to come good in a glorious manner for Belgium. Having recently showcased his abilities against Manchester United in the FA Cup, Tielemans will want to deliver the goods for his national side. Will he continue his fine run of form?

This is not as straightforward a game as Belgium might have envisioned this time last year. On top of that, Wales have a fine recent record against the Red Devils, while they also seem to be gelling well under the tutelage of Rob Page. However, the gulf in quality will ultimately prove to be telling, powering Belgium to a narrow 2-1 win.